Say the name the Bear Hug Band to most British followers of Christian music and you're likely to get a blunt "Who?" response. Yet this band of talented Californians have been visiting Britain for five years, played to thousands and sold hundreds of copies of their CDs. The explanation for all this is that the Bear Hug Band's music is targeted at children and their UK appearances have been limited to Creation Fest, the long established free festival held each year in the West Country. BHB aren't too worried that their skilfully executed music is still unknown to most UK churchgoers.

The band's website explains the important spiritual purpose behind their often zany and hugely entertaining live performances. It reads, "The music that the Bear Hug Band writes and plays is geared toward kids, but we are finding that a whole bunch of high schoolers and adults are listening more than the kids are. There are dance moves and hand motions for just about every song. The only thing that the band really takes seriously are their relationships with the Lord and the things that matter to him. The Bible is the Word of God and it tells us what blesses the Lord and what grieves him. Grace is a pivotal aspect of the Gospel message. Without the grace of God, without Christ's resurrection from the dead, we as Christians are the most pitiable people on the planet. The reason we would be pitied by people is that it would mean we are living for a fake and empty hope. But we've got some news for you, it's the TRUTH! Everything we believe as followers of Christ is truth and Jesus himself said God's Word is truth. Our heart is to bring truth to people who are fumbling around in the darkness and also truth to people (specifically kids) who have been taught false doctrine apart from the Bible. The truth will set us free."

The current line up of the Bear Hug Band is Jakob Rowley (vocals, acoustic guitar), William Funderburk (guitars, banjo), Joel Jurekovic (bass), Desmond Sheehan (keys) and Braden Brodersen (drums). Will and Jake met at a school for worship ministry in Costa Mesa, California, out of Calvary Chapel. Will explained, "We were trying to write serious worship songs and they just turned out to be too goofy. At least a couple of them were kids' songs and we showed them to Scott Cunningham, the worship leader and he thought they'd be great for kids. We started recording with Scott, just a few of them, as we were writing them. Scott was coming to the UK each year to lead worship at Creation Fest. He said, 'Your stuff would be great in the kids' tent. Could you guys get a band together?' So we did and the Bear Hug Band was formed."

Jake vividly remembers the early days of BHB. "It was kind of weird because it started like a joke, the songs turned out to be too goofy. So we didn't actually know if it was going to do anything, if anything was going to happen with it. But we started seeing fruit with kids and with their parents. Kids started coming to the Lord and started to pray with their parents. They started to grow and when we started seeing those things we just kept writing more. And it's fun being goofy. It's been really hard; we've had a ton of spiritual warfare doing kids music and it's kind of amazing to see how much we actually do face. People just think it's for kids! Oh, that's just fun. It is super fun but it can be so hard because there are so many things that can distract you. Kids can unplug your microphones while you play, kids can knock over a bass amp - I did that actually, today." 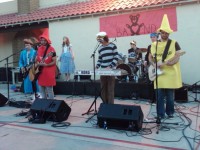 Initially formed just for Creation Fest, the band now play quite a few events and festivals in the US. Said Will, "Back home we do a lot of church stuff around Halloween, Christmas, Easter, throughout the summer some vacation Bible schools, camps." Explained Jake, "None of the band is full time. I suppose you could say I am, just because I don't have another job right now. It's nice to tell people, 'Yeah, I work full time as a musician,' but it doesn't pay any bills. It barely pays my petrol."

In 2006 such was the demand at Creation Fest for a recording that BHB gathered at Scott Cunningham's home studio and made a cheap and cheerful CD. Explained Jake, "That was just to have something out. Later on they worked on it a bit more to make it sound more decent. But the songs were just coming out and they would be recorded. That was more a compilation of just songs that we prepared for Creation Fest every summer. We probably released that CD eight times under different EP names!" Explained Will, "First it was 'Creation Fest Kids Ministry' CD. Then it was the 'Bear Hug Band, Creation Fest'. Then it was called 'Shout!', now it's just '2006-2008'." Jake continued, "We were apologetic. 'You can have this for free because we don't think this is very good.' Parents said it was great, you guys keep writing music. We were embarrassed by it. When we first started recording Scott was telling us to sing like we were little kids. He said it would go over better."

What did go over better was their 2011 full length album 'Who's Got Their Armor On?' Said Jake, "The new album we feel really strong about. We got to spend a lot of time - months and months - on the record; being goofy in the studio and having fun. Our producer, Neil Godding, is the drummer for Scott Cunningham. Bald guy, Englishman. He is so much fun. He's like a cartoon character. When you get to work with him in the studio it's a blast. So recording is one of the best parts when you do it with people like him and Scott."

One of the most popular songs on the album is "Armor Of God". Said Jake, "We often write songs the night before we play them. We'll go back to our cottage or campsite and write for example the song 'Armor Of God'. Because kids' songs are fairly simple and kids are very forgiving you just play 'em. You see what kind of catches on with them. The kids have helped shape us in what we do and who we basically are as we perform and as we play and lead worship more than even each other sometimes because the way that they'll come and respond to us, the things they'll say. They'll say, 'I've got a new dance move for you,' and they have all these hand motions they've made up. And it's kind of fun to use their hand motions for your songs. We were just blown away. We played in this church in California and this one church had choreographed eight of the songs from our new album and did really good choreography."

Another of the Creation Fest favourites on the album is "Take Out The Trash". Said Jake, "I suppose we should say rubbish here, I guess. You don't use 'trash' in normal conversation. It's a song we always get requests for cos we have different hand motions for wiping the counter, you mop the floor, you scrub the toilet, the shower door. It's about obeying your Mom and Dad without complaining. From Philippians Chapter 2, verse 14. Whatever they request, we'll play it. Every single song we enjoy playing because we've taken them, worked them over, changed the format of them. They've changed over there so much so now we play them like this on the CD."

Over the years BHB have found their audience expanding in age range. Said Jake, "When we write songs a lot of the time we tend to want to make them heavier, more rock-based. We have a big punk-rocker-ska backdrop to what we do and we always try to put a little bit into our songs and a lot of the older kids tend to like the heavier songs. So it's kind of weird because we have toddlers, like 3 year olds, 2 year olds, mixed with 14 year olds sometimes. It's hard to figure out what to play for them so we try to make it as goofy as possible so the kids aren't afraid when we make it heavier. We haven't had many problems with that, thank the Lord."