American singer/songwriter BEBO NORMAN admits he had gotten jaded with his music but with his latest album he's discovered a new zeal for his art. Tony Cummings reports. 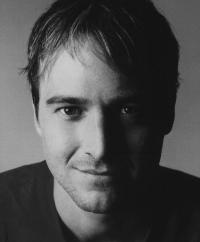 America's Bebo Norman is one of the few US acoustic orientated singer/songwriters to sell well in the UK Christian marketplace. His thoughtful, painfully honest songs have struck a chord with both late teens and older audiences. His new release though, 'Try', represents something of a turning point for the Georgia-born singer. For the first time Bebo includes two songs that he didn't write. Also, he has brought in three new producers, Mitch Dane, Matt Bronleewe and Brown Bannister, replacing Ed Cash who with Bebo has produced all his previous recordings. Probably why the album, unlike some of its predecessors, has a more positive and upbeat feel is that Norman, well known for his bachelor status, recently took a walk down the aisle. Said Norman, "I don't want to be one of those guys who gets married and all he talks about is being married. I've heard too many of those people before. I feel like God puts us where he puts us in our lives so we can draw new images of him. That's where I am right now. I think marriage is just a part of where I am in general."

In America Bebo's popularity with unmarried young ladies was so renowned that it was even suggested that his marriage was a bad career move. "The running joke when I decided I was getting married and people were beginning to find out was, 'Who's going to listen to your record now?'" Norman recalled. "And I would laugh about it, too; but there was a part of me that said, 'What if there is some legitimacy to that?' Honestly, I have no idea; and there's part of me that's still nervous about that. But what, ultimately, makes people buy records? Yes, there's image involved and all those things people create. But those images are such caricatures of who we really are. There are true parts, but they're blown up a bit. I feel if people can still relate to the songs, that's what's important."

'Try' is an impressive selection of mellow yet bright songs. The title track is what he calls his "first non-dysfunctional love song." "Disappear", one of the non-Norman-written tracks, is acoustic pop that calls for the singer to decrease and Christ to increase. "That's the great irony of playing music for a living to me," he said. "I'm supposed to stand on stage every night with a spotlight on me saying, 'I want to disappear.' (It's a) huge irony that has become a prayer for me when I play shows."

Written by friend Brandon Heath, the song "Soldier" was written with Norman in mind. Heath contributed the song years ago, but according to Norman the time never seemed right to include it until now. "It's talking about how Jesus fights for us," he said. "'Just like a soldier you battle for my soul, but more like a father, you come and take me home.' I thought it just describes the absolute breadth of who Christ is for us ultimately - a soldier and a father, two completely different things. But they're wrapped up in the same person. I love that picture." Another outstanding song on 'Try' is the Norman/Dane composition "Nothing Without You". Commented the singer, "We recorded two versions of 'Nothing Without You' - one a bit more intimate, the other a bit more grand. The intimacy that I felt when I was writing this song in my living room with just an acoustic guitar was such a gift - a gift only matched by how big God seemed as I played this song publicly for the first time and had the opportunity to worship corporately with a room full of people. Both versions speak differently into my life and impact me in different ways. Both are real. Both are important to me. So we decided to share both versions with the hope that they would speak to you on different levels as well - that the 'intimate' and the 'grand' would somehow show a bigger picture of who our amazing God is."

The songsmith is pleased with his change of musical and lyrical direction. "I think God sort of redirected me in a huge way. And it was made very obvious that I am still called to play music and be passionate about it, but I just had to do it differently now."

The freshness which permeates 'Try' didn't come easy for the singer. He admits, "I went through this huge redefining period about a year and a half ago where the tour was going great and the record ('Myself When I Am Real') was doing well. I even had a radio song ('Great Light Of The World') for the first time in a while. And so those things ere good, but I found myself on the tour going, 'I hate playing music right now.' And it was odd for everything to be clicking and for me to kind of step back and go, 'I'm not happy doing this at all.' So I decided to cancel all my shows that summer and be home. The first thing I needed to do was just get grounded on some level. I asked myself a lot of hard questions of whether or not I should be playing music. If the passion was gone, then why am I still doing it?' I swore I wouldn't do it if the passion was gone."

After taking some time off, Norman found answers to these lingering questions. "I think God sort of redirected me in a huge way. And it was made very obvious that I am still called to play music and be passionate about it, but I just had to do it differently now."

Bebo truly does have a heart for God and wants to keep HIM at the center of his music, not himself. Gotta love that.

Great article -i immediately could sense the difference in the new album, but still regularly play them all. Bebo has a way of delving into my soul with his honest music, his vulnerability in laying wide open his feeelings and fears. I hope he doesn't become just another P&W artist, but stays true to the style that won him a huge support base.
Rev paddy Venner