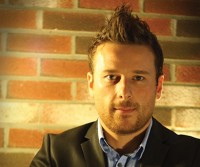 His Wikipedia entry describes California-based Benjamin Dunn as a "touring musician and artist" but that doesn't begin to convey the reality and for Dunn "tour" takes in a lot more than clubs, churches and auditoriums musicians usually associate with the word. Benjamin has performed much of his music on rubbish dumps, in homeless hostels and leper colonies. Musically too his recordings are a long way from the norm. The album 'Circus Of Love' by Benjamin Dunn And Friends - named recently by Cross Rhythms as one of the 20 Best Albums Of The Year - is a stunning celebration of instrumental quirkiness which fuses banjos, accordions, glockenspiels and vintage synthesizers with pop melodies belted out by a gang of vocalists.

Benjamin spoke on the phone to broadcaster Mike Rimmer about his very unusual approach to music and ministry. He began by talking about the 'Circus Of Love' album and the church that birthed it. "I'm part of a church in Harrisburg, Pennsylvania, but I myself live in Santa Cruz, California, and, you know, it's just two different parts of the country, but we also have a church community there in Santa Cruz. So we basically have two sides of this country, with a creative community that anytime I want to write or do some art or do some music or make a record, I have all these amazing musicians, this community of musicians who love the Lord, they love creativity, they love joy, to work with. So that really is Benjamin Dunn and Friends, a creative collective of all of these amazing musicians that I just write with and create with. And that's kind of how the album came about. On the East Coast we set up to record an album, and it wasn't till halfway through the album that we decided 'let's just call it Benjamin Dunn and Friends'. We got so many people working on the album together I didn't want to just take credit for all of it myself, so I put 'and Friends' in there. It's an amazing, creative collective."

'Circus Of Love' is worshipful, but doesn't fit into the stereotypes of modern worship music. Said Benjamin, "It doesn't use a lot of the over-used approaches to worship music. We wanted to put worship out there in a fresh, joyful way. Celebratory worship is what we like to create, so that's kind of what we did."

One couldn't call 'Circus Of Love' a congregational worship project. Said Benjamin, "We do play shows, but in that moment of beauty and creativity, I kind of feel like each person can have their connection with the Lord and feel his presence. It works for me when I'm playing - I feel the beauty of the music and of God's goodness just washing over me, so I think that other people can experience the same thing within a show, within a set performance. I think in the creativity people can experience worship." 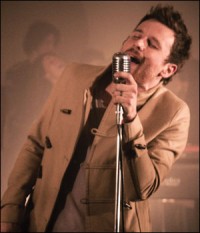 So why is the album called 'Circus Of Love'? "I kind of got this idea about the whole earth being enraptured in worship - all these animals and deer running around, and squirrels. . . I just had this idea that everything is singing a melody, everything is singing a song, and it seemed in my brain just a massive, chaotic-looking circus. So that's where the concept came from. It's just the whole earth, all of creation singing and declaring the glories of God, and just being wild and fun."

This most unusual singer, multi-instrumentalist and church leader spoke about some of his other activities. "I've written a book called The Happy Gospel. Classic writers like Adam Clarke and C S Lewis, and just different guys who believed that joy was a staple of Christianity. Also, we do these things called Garbage Dump Tours. How that started - my wife and I have always had sort of Gypsy travelling feet, and we've always been travelling around the world, and so ever since we got born again, we've been buying these around the world garbage dump tickets. Basically, we'll take about three weeks and go to different Third World countries, like Thailand, the Philippines, Cambodia, Nepal, we've been to Vietnam and India, Bulgaria, just all these places, and then we'll go into the poorest places within these poorest places, which is, you know, these garbage dumps.

"People actually live in these garbage dump communities, they eat out of the garbage dump, they get their clothes out of it, and just, you know, crazy poverty. So we go there and I like to serenade them, I like to bring them joy and celebrate with them and feed them. Last year we fed a thousand lepers at a leper colony in Hyderabad, India. And this year we decided to do the same thing again, but this time we're going to actually build them a home, so we're gearing up to build a leper home for 40 families and their children, so we're super excited about that. I think that a lot of our inspiration comes from visiting these people and bringing them joy and just seeing the Lord feed them and touch them and lift them out of the garbage dumps. That's a huge passion of ours, reaching the poor, reaching these people in the garbage dump communities and these leper colonies."

Benjamin admitted that to take on such ambitious missionary excursions isn't easy. "It's always a stretch financially, I'll be honest with you. But as we travel and as we tour we raise money, so some of these shows that we're doing on this East Coast tour and the last tour that we did have raised some money that helps us travel to these Third World countries. And now we're raising money for the leper home that we're doing. Basically the way we raise money is through tours, through album sales, through T-shirt sales and through generous donations from people, which is a huge help."

Radical mission trips are also emotionally as well as financially demanding. "It's a crazy thing to see when you go into a leper colony and there's a mother with two kids, and she has leprosy but her children don't but they're all forced to live in this caste, and she has no arms, and no legs. There's a lady there who's our favourite, her name is Nosama. I think the only way we can deal with it is just trust that God has something better, and that we are called to help them and to provide something for them and to love them. Every time we go, I like to go to Nosama's home and sing over her. I think emotionally it's more inspiring because I think that the Lord takes care of them, even in these pits of Hell. The Lord is there, his presence is there, he's still taking care of his children there. It's a rough thing to think about, and to cope with, but I think it's a grace that we have to work with these people and to love them."

Benjamin continued, "Once I got born again I felt like the world of love and compassion and justice, all these things that I didn't have a clue about before, just opened up, and it was just like a flood. Honestly, we're just compelled by love. Where some people couldn't see themselves doing that and it's just, you know, crazy to them, for us we think just the opposite, we couldn't think of not doing it, because we're just constrained and compelled by this passion that we have for them. And it's just, honestly, it's out of joy and it's out of pleasure that we do this, it's a love for them that we can't hold back.

"I'll write songs while we're in the garbage dump, and we'll get melodies, just spontaneous, worshipful, joyous melodies. They'll just pop in my head and they'll stick there for months and months and months. As I go into the studio and start actually composing a song, I'll remember, 'Oh yeah, this came in the garbage dump' or 'this came when I was singing over Nosama'. In fact, 'Sweetest Thing' came right over Nosama, so that is actually about the woman named Nosama with no arms, no legs, in Hyderabad, India."

Re: Circus of Love CD. It has been produced in hard copy [I have one], but I'm unable to supply any publishing details. I suspect Benn did a limited run himself...?

can you tell me please, if Circle of Love can be bought on CD? by Benjamin Dunn. I don't have Apple so cannot download on i tunes ..

Benjamin Dunn is in fact in my opinion the best worship leaders out there.... it goes beyond worship but a portrayal of the Heart of God! It's time for a renewal of Music and Benjamin Dunn and Friends is that key for that renewal!