Beth Goudie: Out of the boat and looking towards tomorrow 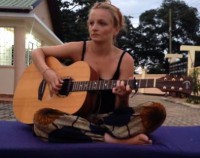 Welsh singer/songwriter Beth Goudie is a new name to Cross Rhythms radio listeners. . . kind of. In fact, under her maiden name of Beth Bullock, the lady made it to the Cross Rhythms playlist when featuring on dance music maestro Andy Hunter's "Harmony". Although Beth's haunting voice works well over electronic rhythms, it's acoustic-styled music which is her first love and it's the track "Tomorrow" from her EP 'The Boat' which has given her another radio airing.

Beth was born in the Rhondda Valley in south Wales and raised for a part of her childhood in Tanzania, East Africa. She grew up in a home filled with music and found her inspiration at a young age in songwriters such as Leonard Cohen and Joni Mitchell. Gaining her own passion for telling stories through song she made her debut performance at the age of 16.

Beth spoke recently about the inspiration behind 'The Boat'. "It's my first release under my new name and features four songs that I've written over the last year. All of the songs are really stories of transformation, love and hope. The title track is based on a story my Dad used to tell me when I was a little girl, usually when I couldn't sleep! Everything was always okay after I'd heard that story. That theme carries throughout the EP really; there's another song about family on there, 'Jeanie' and then the other two are basically both about transformation from something difficult into easier times. I decided a while ago that I was only going to write songs that ended with hope from then on. Everyone is welcome to hold me to that! I think it's important to always offer hope."

As well as "Tomorrow" another standout is the song "Jeanie" written for her Grandmother. The singer/songwriter recounted, "She told me recently the story of how she met my Grandfather. It's a really lovely story and one I didn't know before. I love [the song] because it's come out really well on the EP and simply because it's just all about how wonderful my Grandmother is!" 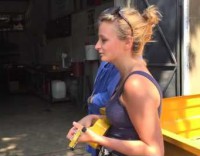 As Beth Bullock and now Beth Goudie the singer has clocked up hundreds of gigs and prefers them to the recording process. She admitted, ". I always feel like I can get more emotion across in a live performance. I enjoy recording vocals, but not so much anything else! I much prefer it when my guitarist (and husband) is playing on tracks. Which he has done for 'Tomorrow' and 'Jeanie'."

Beth has now released her second EP, 'Wilderness', which no doubt you will be hearing soon on Cross Rhythms. She told Louder Than The Music website how she would define success. "There are three things that define success for me. The first is freedom; I'm privileged to be my own boss, which took a long time to achieve. Without the freedom to write, record and travel, it's really hard to get anywhere with music, so freedom to do what I love is definitely a measure of success for me. The second is reaching people; I write songs to say something, whether that's a simple message or something a bit deeper, I will feel successful for as long as my songs are helping people, making them think or making them happy. And the final thing is making a living doing what I love; it's not an easy industry to make money in, so for as long as I get to make a living doing what I love, I will consider myself successful. Obviously there are some nice to have's on the list too, a Grammy would be lovely. . ."

Really enjoyable , listening to Beth on Tele Made in Carddiff.
It,s wonderful to listen to , and to know that we have a new organic artist . Long may Beth sing write and perform.
Dylan.