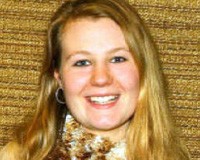 Anyone who caught Beth Tysall's stirring rendition of "Amazing Grace" at the Crusaders' Royal Albert Hall celebration in May will know that a bright new singing talent has emerged onto the British scene. 19 year old Beth recently released her debut album, 'Like My Shadow'. Recorded at Eastbourne's famed ICC studios, it shows the Rugby-based singer/songwriter to be a powerful pop rock talent. It also shows that the talented teenager's musical roots go back to childhood, as she told Mike Rimmer during her recent appearance on Cross Rhythms' Rimmerama programme. "I wrote the title track when I was 12! So it's just been a gradual process bringing everything together. I've taken aspects of my life and put all that sort of thing in, but mainly it's been Jesus' influence, he helped me through."

Beth explained how her songwriting began with a touch from God. "It was a bit strange actually, it definitely started with 'Like My Shadow'. I was in bed asleep, it was quite late at night and I actually felt the Spirit of God wake me up. I had these lyrics come to me, jump into my spirit, and I had to write them down really fast. It was just as if the tune came to me straight away as well, almost as if a ready made song was just passed to me. I can honestly say no other song has come to me quite like that, but that was how it started."

Beth Tysall was born in Rigby on 14th April 1987. She grew up living with her mother and brother and gained many interests throughout her school years - music being her favourite. Beth began playing the clarinet aged 10 and frequently sang in the school choir. She remembers, however, being turned away after auditioning for the Nativity, with a teacher's comment of, "You can't play Mary because your voice is too square!" Since that time, Beth decided to change her style from classical to big ballad.

After joining Rugby CLC, Beth made friends with Rochelle Frost and the girls happily sang karaoke in front of friends and family until the opportunity of entering a Crusader talent competition came along. Just for fun, the pair sent in a video tape of their own arrangement of Whitney Houston's "I Have Nothing". Throughout the stages of the competition, Beth and Rochelle sang to many different audiences. The final of the competition was held at Tatton Park in Manchester and was recorded for Sky TV. The girls came first and took on the name Magnificat. The duo later undertook a series of evangelistic and ministry performances throughout England. In 2003, Beth left school and decided it was time for the now young women to go their separate ways. 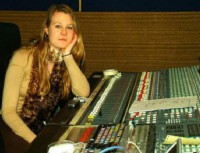 As a solo artist Beth has been making steady progress. She is refreshingly God-centred about her music career. She said, "My vision is a varied mixture. I'm very passionate about teaching and evangelism, especially in the secular music industry which I feel needs a little more attention. I also have a huge heart for people and their needs, in particular orphaned children and young girls who have half naked pop stars as their role models. I long to see a set of good male and female role models for the younger generations. My love for worship also plays a large part in my vision, so I continue to lead worship at my local church."

One outstanding track on 'Like My Shadow' is "Great Are You Lord". Beth told Mike Rimmer, "I can't actually remember starting to write this one. The lyrics just came together to start with. The main line, which I really like to focus on, is 'Give me your faithfulness.' It's like a prayer asking God to help me be more faithful to him. It's kind of the most worshipful song on the CD, but as the band came together it gradually got rockier and rockier which I really love so it's ended up being quite a heavy track as well."

Whatever the future holds for Beth she is determined to keep God the centre of all her creative activity. She said, "My big heart is evangelism. I love to do evangelism, but I don't like to throw it in people's faces, so I think my music is not really in your face Christian music. The thing that I've found with festivals which I've been to is that the things you say between your songs have the biggest impact on people. I'll never forget when I was singing at one festival and a girl came up to me afterwards and said, 'Do you know, I was just about to give up on my Christian faith. I was so stuck in where I was and didn't know where to go from here but the things you said in-between your songs really kind of helped me and I want to carry on with it now.' It's that sort of thing that makes all the difference."

Beth is an amazing woman of God she is an inspiration to many not only in her music but in many other ways. Her voice is wow! it just blows you away.
i strongly recomend you get the c.d i cant stop listening to it. Beth is a very talented girl who i believe will toutch the hearts of many through her music yep shes going places.

'Like my Shadow' is an amazing CD. I would reccomend that people listen to it. Beth has an amazing voice, and you can see how much she loves God through her music!