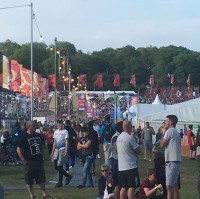 In a year where many Christian festivals are including the theme of celebrating unity, I was concerned to see if the addition of a second BCDO weekend would affect the atmosphere and impact of the original festival. There was, however, no need to fear a negative influence as the promise of an impending heat wave and a stunning line up provided a huge draw to thousands of campers and day visitors alike.

An expectant crowd collected around Main Stage as the UK's Faith Child opened the proceedings with an energetic set that engaged the already sizeable crowd. Although he was plagued by technical glitches, the loss of a backing track at one point allowed Michael Ayo the opportunity to demonstrate some impressive rap skills. A banner for unity that has been touring festivals was brought on to stage in readiness for the addition of finger prints signifying our unity.

A wander through the site revealed people dressed as large vegetables and a range of clown costumes and it seemed that the addition of an extra weekend had not affected numbers. The Avenue was bustling and full of groups enjoying the good weather. On the way over to the Tearfund Tea Tent, I stopped with a younger travelling companion to handle some lizards and a 13ft python at RepTyler's tent in front of the beautiful Wiston House.

Arriving at the Tea Tent, I sat down to await the arrival of BCDO favourites, The Abrams. These brothers turned in a typically energetic and musically impressive set of bluegrass numbers including tracks from their new EP, "Spend Your Life With Me" and "Fine". Ralph Stanley's "Constant Sorrow" was a moment for all to join in. Over the years it has been good to see this group growing in stature and class. With the addition of some strong backing from bass, guitar and drums this group were still able to turn in a polished performance without losing an authentic roots feel.

LZ7's Lindz West showcased an excellent set that had the whole crowd moving as one to radio classics such as "Brave" and "Elevator" before he paused to reflect on the events of the previous week in his home town. This was to become a recurring theme throughout the course of the weekend. Lindz's call for courage and his statement of faith and hope was delivered in typically passionate fashion. 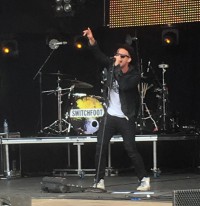 The Saturday evening kicked off with a slick but emotionally-charged set by Switchfoot. Jon Foreman revealed vulnerability as the five-piece worked their way through their impressive back catalogue, mixed with cuts from their recent release. Reflecting on what it means to be human, highlights included "Live It Well" and "The Shadow Proves The Sunshine" in what was to become one of the most memorable performances of the weekend.

The climax of the first day was an understated, but incredibly powerful appearance from Bethel Music. Brian and Jenn Johnson matched each other with distinctive delivery which at times saw their vocals sittings on the edge of cracking. Stripped back versions of "Lion And The Lamb" and "King Of My Heart" culminated in an act marking the events in Manchester led by Pete Grieg as 22 candles were extinguished one by one before being relit to symbolise the hope we have. These candles were then joined by thousands of mobile phone torches as the arena was lit in a very moving event.

Sunday opened with the hip-hop artist and producer Andy Mineo, turning in another of the standout moments of the weekend. "Uno, Uno, Seis" had the entire Main Stage area singing and moving together before he then went on to cause congestion in the Avenue for the first time that day. A signing session was then followed by a second set on the Illuminate stage which drew a huge crowd.

Rain arrived as Matt Maher took to the stage at 1.10pm, but this did little to dampen any spirits. As an artist, influences of Bruce Springsteen could be heard as Matt led us in worship and spoke with passion. The sun returned in time for the distinctive strains of Mark Hall of Casting Crowns singing classics such as "Lifesong" and newer material from 'The Very Next Thing'. A short walk across the site allowed me to catch a few numbers from the excellent Flight Brigade. Rock guitars were matched with the violin in what was one of the hidden gems in the packed weekend. Ollie Baines closed the set explaining that the usual seven-piece had been reduced to six members for the weekend as his wife, Miriam, was expecting a baby within the next two weeks.

This then left an evening at Main Stage, kicked off by the irrepressible Newsboys. A stream of hits, including "God's Not Dead" and dc Talk's "Jesus Freak" all made an appearance as Duncan Phillips on drums was the epitome of a visual timekeeper. The Rend Collective maintained energy levels during a set that drew the whole crowd into worship, where Chris Llewellyn commented that there was no need for a worship leader!

The entire weekend was rounded off by Reuben Morgan, who ably led the large crowd through a list of Hillsong standards until Pete Greig took to the stage to make an appeal. This perfectly brought to a close an event that showed itself to be in a strong position as it continues to develop and take the lead in showcasing top quality Christian music in Britain.

The opinions expressed in this article are not necessarily those held by Cross Rhythms. Any expressed views were accurate at the time of publishing but may or may not reflect the views of the individuals concerned at a later date.
About Ian Webber

Ian Webber lives with his family in Buckinghamshire and is a regular Cross Rhythms reviewer.

Me and my wife have been to this venue for the past 8 years and look forward to the 10th anniversary next year.
I tell lots of people about the venue and that it is such a great family weekend shared with like minded people.