Jonathan Pierce: The US singer with his sights set on the UK

JONATHAN PIERCE is well known on US Christian radio though, despite his impressive vocal talent, he's still to make much impact in the UK. Tony Cummings reports. 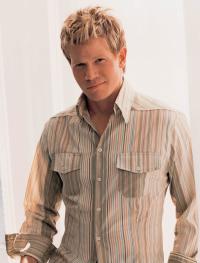 One of the peculiarities of the Nashville CCM scene is how some artists can gain major success with hit albums and Dove awards or nominations yet remain unknown in the international Christian marketplace. Such an artist is Jonathan Pierce. In the USA his muscular vocal approach, which draws on classic R&B and is not dissimilar to vocalists like Clay Crosse or Michael Bolton, has brought Jonathan many fans. Yet his albums 'One Love' (1995), 'Mission' (1997) and 'Sanctuary' (2000) never obtained UK release while his latest one 'For You' (2004) has hardly broken UK sales records despite catching the ear of the Cross Rhythms reviewer ("Undoubtedly, the best cut is the closing title track, an epic multi-layered, U2-esque ballad featuring the Jubilee Singers which captures the listener's attention from the stripped down, acoustic beginning to the uplifting climax."). Other standouts on 'For You' is a strong dance-tinged track "Life, Love & Happiness" and an infectious cover of Sting's "Let Your Soul Be Your Pilot."

Pierce chose Brian Rawling and Billy Mann as the producers of 'For You'. Rawling has worked with Enrique Iglesias, Rod Stewart, Cher and Whitney Houston. Mann has worked with Jessica Simpson, Kelly Rowland (of Destiny's Child) and Hall & Oates. Commented Jonathan, "They taught me that I can influence and infuse culture subtly, to make the most impact. And that's what this record deals with." "Still The Love Of My Life," a song Pierce co-wrote with Mann and pop icon Michael Bolton, is a classy cut.

Jonathan Pierce (nee Hildreth) grew up in Odessa, Texas. After moving to Nashville, he sang with the acclaimed Christ Church Choir, where he caught the attention of church member and country music star Naomi Judd, whose husband, Larry Strickland, would become his manager. Pierce got his big start in Christian music as a member of CCM pioneers The Imperials (1991-1994). He also sang briefly with The Gaither Vocal Band (1994-1995) before going solo. On 1995's 'One Love' he used a variety of producers including Michael Omartian, Jon and Dino Elefante and Guy Roche (known for his work with Michael Bolton and Celine Dion). The album included a US Christian radio hit song "Rise Up" (written by Brent Bourgeois), a Stevie Wonder cover, the upbeat "Carry Me Through" and a song contributed by Gary Chapman. In 1997 Pierce continued to work with a variety of producers and songwriters on the 'Mission' project though he co-wrote eight of the songs himself. Like the first project, that album offers an eclectic mix of styles, from the excellent ballad "Farther Than Your Grace Can Reach" to the disco-like "Hold Me In Your Arms". Pierce also covered Brown Bannister's song "Praise The Lord" (originally a hit for The Imperials) with Bannister producing. Jonathan's version went on to be nominated for a Dove Award.

In 1999 Pierce was given the opportunity to play the part of Angelus in the play Les Miserables on Broadway. He followed that with a turn as the lead character in a Nashville revival of Joseph And The Amazing Technicolor Dreamcoat (Andrew Lloyd Webber's first Bible-based epic before Jesus Christ Superstar). Back on the CCM scene in 2000 Jonathan recorded 'Sanctuary' working exclusively with producer Phil Naish. On it guests The Katinas contributed vocals to "I Hold In My Heart" while Jonathan's wife Denise co-wrote six of the songs with her husband. "Denise is a great lyricist," said Jonathan. "She's been really good fro me, because I'll have these thoughts and I'll write them down. Then she'll help me fine tune them. There is that disagreement every once in a while. After a few minutes you realise, 'you know, it really doesn't matter.'"

As well as having a much admired voice, Jonathan has creative talent in another area - interior design. He helped fellow singers Deana Carter and Brad Paisley design a house on Country Music Television's Ultimate Country Home series. Jonathan lives outside of Nashville, Tennessee with his wife in a home filled with Asian antiques and art from around the world. His home dÃ©cor reflects his music: global, emotional and romantic. Despite his interior design gifts, music still remains Jonathan's first passion. As he once told Release magazine, "Music is the strongest communication there is. I've felt closest to God when I've heard music that pierced my heart, moved deep into the dark crevices of my life and made my dreams come alive again."

What love for God and your singing shows it! It is beautiful
You are lovelyREAL

Jonathan, You are an amazing designer - just one more talent of yours! But how I wish you would release an album again, even if it's not a Christian album. Your voice is a gift, so beautiful and powerful, and it should be shared with the world. I have followed your career from the beginning. I still listen to your music often. There is no one else quite like you and we miss you! I wish you much success and happiness in your life. I am probably your biggest fan :)

Jonathan Pierce I Was soo happy to locate your music especially haeling hands and praise the Lord!! i am going thru some struggles and these songs are hitting the chambers of my heart.Please tell me you are still singing!your talented and your voice bring tears and memories,good ones of when I first came yo the Lord and my one of my sisters and I were going to church and listening to KSBJ .I still listen to it ,but want you to know sometimes I wish your songs and others of that time were srill being heard god bless and thankyou for the memories,but wher are you now?

I have really missed your singing.and have been a fan of yours for quite some time. At one of your concerts you sang "Healing Hands" and came down in the audience and sang some of this song to me--I was having a bad day, and your song is very healing. You know me as one of those Mount Paran ladies. May God bless you.

Jonathan does have a beautiful voice but it takes a lot more than that to make it in the music industry. I have seen him "perform" on a couple of occasions and that is what it was -a "performance". He seems to be all about himself and though I loved some of the song he sang (thanks to his ex-wife), I did not the attitude he displayed on and off the stage.

Hey Marcy
You are entitled to your opinion ...but keep it to yourself. It only shows a lack of grace.
Try a little kindness ...it will take you a lot farther in life.

Hi Jonathan,
Just wanted you to know that you have a fan over here, I have had your "Mission" cd for quite some time and sadly it was not used untill just recently, now it is never out of the player, and I was hoping to get some more of your work. I am so glad I decided to google to find out if you had any more songs out there. Great to know that you do so I hope to purchase soon.
Keep on singing, you are an inspiration to listen too.
Praying God's blessing on your ministry.
Yours in Him
Carol

jonathan!! where are you?? i grew up on your music as a young child and you've made an impact on my life! miss you and your music!

Hey Jonathan !!!
I just wanted to say that you and your ministry are such an insperation to me !!! I am 17 yrs.old and absolutely love you and your music !!!I am your # 1 fan trust me !!! Your albums are such a blessing !!! When I wanna hear somethng that makes me fall head over hills in love again with my Creator I put your cd in and listen to you !!! I am in the ministry myself and love it !!!! There is nothing I want to do more !!! The ministry is my heartbeat !!! Singing is my passion !!! Music is my life !!! And Jesus is ther love of my life !!! This world would be very dull if it wernt for people like you !!!! Thank you for the sacrifices that you have made !!!! You and your wife !!!! Though I dont know you guys I love you guys and am praying for you !!! Thanks for steping up to the plate and sharing the message of Jesus Christ around the world !!!! We need more people like you !!! I believe that God is going to bless you , your wife , your ministry , and your interier designing greatly !!!! I believe it will be above all that you could ask , think or immagine !!! I love you guys !!!!

ps. I dont know if you ever got it but I sent you an invitation to my 16th Birthday Party !!! LOL !!! Bumber that you and your beautiful wife couldnt come !!! Love you guys bunches and would love to hear from you all !!!!

We miss you!!! Hope you come back to music really really soon! Hope your business is going well! We love ya and hope to hear some new music from you in the very near future!! Jeff & Angel