The recent release of the compilation 'The Ultimate Collection' by Big Daddy Weave throws the spotlight on a band who down the years have become mainstays of Nashville's CCM scene. And with the band set to release a new album 'Love Comes To Life' in April now seems a good moment to look at the history of the Mobile, Alabama five piece with the Dave Matthews Band-like sound. Big Daddy Weave's singer and chief songwriter is Mark Weaver. When a few years ago Mark was asked what was his inspiration in 14 years of songwriting he responded, "It's Jesus man. It's him without a doubt. I've got nothing on my own."

Big Daddy Weave formed when Mike and brother Jay Weaver met Jeremy Redmond, Joe Shirk and Jeff Hurst at a gig on the campus at the University of Louisville. Jeremy Redman told website BeyondTheTurntable, "We all kind of met at the University of Louisville, except those guys growing up together. They met before they played! I guess Jeff and I were the first ones that met at the University." Mike and Jay were born in Nashville and Mike started singing aged eight in his church choir whereas Jay learned bass at age 12. Jeremy Redmond (the brother of Matthew Redmond) was born and raised in England until he was brought over to Nashville. Jeff Hurst, who calls himself "the grandpa of the group", started playing drums at age nine and has been through many bands before he met Big Daddy Weave. Joe Shirk, born in Hopkinsville in 1997, has been playing saxophone and keyboards since he was 11.

The name Big Daddy Weave is a strange one but as the supersized Mike Weaver told ChristianMusicReviewBlog, "The real blunt answer is we really didn't think through things very well. In college you know how it is, you're there and it's that time in your life and it's so great because there are so many things that are fresh and new. If you're mine or my brother's size in the South, mainly mine, he's actually a lot smaller guy than I am, at some point someone's going to say, 'Hey big daddy!' We all went to school in Mobile and that is the heart of the South. So, Big Daddy was just a nickname we had had for sometime; and then Weave is part of our last name. It was just being snarky, just being silly." The band's debut album was 2001's independent release 'Neighborhood'. Their sound in their formative years was probably best described as acoustic folk rock.

With their tight sound, radio friendly melodies and Jesus centred lyrics Big Daddy Weave soon attracted the attentions of Nashville-based CCM label Fervent Records. There was no doubt the strong ministry focus of Mike's songs on the band's record label debut 'One And Only'. The songsmith said at the time of the album release in 2002, "My prayer every night is that God would get me and everyone else out of the way and bring Jesus to the front, because that's the image we need to portray. That's what I want people to know when they see Big Daddy Weave, they see Jesus." 'One And Only' was produced by FFH's frontman Jeromy Diebler. It sold well and the band were nominated by the Dove Awards as New Artist Of The Year. The following year Mike Weaver and Jeremy Redmond produced and created their next album. 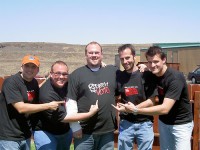 Considering the success of 'One And Only' with its acoustic folk flavour it was surprising that the band's next album, 2003's 'Field Of Grace', significantly upped the rock music anti with the band adopting a more organic rock approach not dissimilar to the mainstream's Dave Matthews Band. But if the electric guitars and keyboard interplay were new, Weaver's ministry focus remained intact. Mike told Christian Retailing magazine, "In our weakness that's when he's going to show up most powerfully." The opening song "Set You Free" was a band favourite. It was influenced by Weaver's testimony of salvation: "It's like the Israelites running back to things and having to be yanked out again. The Lord set us free when we were saved, but he continues to set us free, calling us out of ourselves into more of him. If people can come away from one of our concerts [instead of hearing] Big Daddy Weave, it'd be so much better for them to say, 'Man what an incredible God Big Daddy Weave serves!' If they can meet the creator of the universe, not only just hear about him but experience him, that's a really great thing."

Like its predecessor Mike Weaver and Jeromy Redmond produced 2005's 'What I Was Made For'. This album was made after Hurricane Ivan hit the US which heavily damaged most of the band's houses. Said Redmond (to ChristianReviewMusicBlog), "From a recording side, there were a lot of things that all came together at once that allowed our album to be postponed past our deadline, including the hurricane. It definitely put a halt on things - our worlds kind of went upside down there for a little while, in good ways and bad ways." "But God is faithful," Weaver added. "At the end of the storm, making the album - I feel like all of us are at a better place than when we went into it. We can see the hand of God. We can see how God drew communities together in our area. In the middle of the abundant life he's promised, in the middle of even the worst parts of that, honestly, he can turn disaster into something miraculous."

The next album, 2006's 'Everytime I Breathe', was the first for which Jeromy was the sole producer. Mike Weaver spoke to Christian Retailing magazine about the album, "We just think that worship is often mistaken for corporate worship music, songs that we sing together. Worship isn't music - worship is our whole life response to the greatness and glory of God." The band wanted 'Everytime I Breathe' to "encourage listeners that worship can happen at anytime, any place and should be as natural as breathing." The album was a mixture of acoustic-pop and rock they also made contemporisation of the Ira Sankey hymn "Trust And Obey". There were, however, problems with the production. Chief songwriter Mike Weaver returned to Nashville after he had been suffering from a spiritual and creative dry spell. So for the first time he happily accepted help from other songwriters including Pocket Full Of Rocks' Michael Farren.

Two years after 'Everytime I Breathe' the 'What Life Would Be Like' project was released. When asked about the album Weaver told the ChristianMusicReviewBlog, "I think God has been doing something in our hearts for a little while. We just see people in the church and we see how tired we all get trying so hard to do things for God; and we all know deep down we don't have it together. But on the outside sometimes there's this show and we try to be somebody for God. I really don't think that was ever his intention and I really felt like that's putting the cart before the horse. We're not supposed to come to him so that we can be somebody for him; we're supposed to come to him like we are so that he can empty us out of us and fill us up with him. Then he can do through us things that are greater than we could have ever imagined accomplishing on our own. I think that when we have that in the right perspective, the Lord can accomplish great things through us. The seasons in my life when I try in my own strength, and I try so hard, are the most frustrating seasons for me. When I come to that place where I can just lay those things at his feet and say, 'God, I need you so bad. There's no way I can do this on my own,' and I really can submit myself to him, that's when I see him do great things. I wish for me it was a place I could live all the time. I feel so wishy-washy in my own faith. I'm taken aback by him sometimes. That album came out of just wanting to be transparent about that in our own minds; and then remind people that it's about us letting God have his way with us, and not the other way around." The album release was followed by the bands first headlining tour with of the US support act Josh Wilson.

It was the band's album targeted at the 2009 Christmas CD buyer which, surprisingly, proved to be Big Daddy Weave's most successful album to date. 'Christ Is Come' was quickly recognised by the Christian music buying public as an outstanding celebration of the incarnation and was eventually named Christian Album Of The Year at the 2010 Dove Awards. Weaver told journalist Kevin Davies at NRT, "Do you get so caught up in the busyness of the Christmas season that you miss HIM? This song is great to reflect on during our Christmas and during the year when we spend time idolizing things that aren't God. I love that Christmas passage from Luke which includes two very important reminders: 'Do not be afraid' and 'Glory to God in the highest and on earth peace, goodwill toward men!'" Mike continued, "This year one of the things I have been asking God for is to give me eyes and ears that see and hear and do not miss [the Lord], not only in this Christmas season but every day."

2011 saw the release of 'The Ultimate Collection'. One of the tracks on the compilation was a taster title track from the band's 'Love Comes To Life' album set for release in the US on 17th April this year. The song has already received significant radio play Stateside and all the indications are that when released the new album will connect with America's large US Christian radio audience. And Mike Weaver continues to give all the credit to the author and finisher of his faith. He told CMRB, "I would not have the job that we have if it wasn't for God. I would not have the incredible family, my wife and three kids, I would not have them without him. I've got nothing without Jesus".

The opinions expressed in this article are not necessarily those held by Cross Rhythms. Any expressed views were accurate at the time of publishing but may or may not reflect the views of the individuals concerned at a later date.
About William Parsons
William Parsons is 16 years old and is a keen supporter of Stoke City.