Bill Drake: The US singer/songwriter with a new band

American-born, UK-based BILL DRAKE is finally getting the profile that his talent deserves. He was recently quizzed by Tim Cockram. 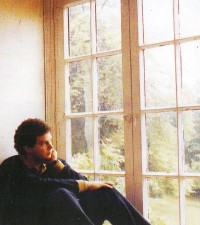 American singer/songwriter Bill Drake is not your typical purveyor of sweet Christian songs. He is working with Operation Mobilisation and ministers and missions all over the world. His new album 'Crimson Thread Of Grace' is his first for ICC. I tracked the man down in a spare moment in a meeting-packed schedule and fired in a few questions.

Who are you?
"I guess I'm a pastor communicator. I have a desire to see people, myself included, find their fulfilment in wholehearted serving the Lord. I'm desperately trying to work out what it means to be a citizen of heaven and not an American and really trying to write songs that say what isn't being said a lot, not because I'm trying to find a niche in a market or something like that, but it's like trying to carry on in a lot of ways the tradition that Keith Green started. His ministry had such an impact on me. It's kind of like the reality of lifestyle message and music - those things have to work together and I'm trying to do that with my life."

Your lyrics are uncompromising to say the least. Very direct.
"Yeah, maybe too much. If you don't know me you might think that I'm beating you up or getting up in your face. It's not that I really want to do that, it's just that I'm trying so hard to communicate something that I want to be so clear."

How important is the music to you?
"I think we take some people by surprise but the concerts that we do, our music is again only part of it, and a lot of what we do is multi-media now. So if you don't like American pop - you're not gonna have a problem because there's so much more happening in a concert and again it's all based on the desire to communicate. I know that my style of music is not everybody's favourite. We've actually changed a little bit of that on the new album, it does sound very much more British. I'm not trying to be Delirious? or Matt Redman but one of the things as a missionary is you want to communicate to people with cultural relevance arid so for me that actually means I've got to change my style of music a little bit here and actually we've succeeded.

How did you end up working with Operation Mobilisation in the UK?
"I was going to Biola University in Los Angeles and George Verwer the director of OM came to do the, missions conference. He heard me sing and play especially some Keith Green tunes, (George actually had an impact on Keith before he died) and he was moved to tears right there on the platform but in the same breath he actually addressed me in front of the entire crowd of people there and said, 'Bill you probably shouldn't sing stuff like that if you're not willing to go do it yourself.' He really went after me and the Lord really used that, just really convicted me, and he personally invited me to be his musician and being as he was based here in the UK that meant moving to the UK with my family. I have travelled around with George for two years as his musician doing music as he preached. He had an agenda, which was to eventually release me into my own mobilising ministry, but he had to get me a platform, he had to give me credibility. The scene over here is a much different scene than it is in the States, very insular scene in the States actually, whereas here the scene ends up being quite international which is basically the way things have gone. So he's opened up doors for me in Europe and South Africa and of course I still have my relationships in Canada, the States and Mexico.

"A couple of British guys that have really paved the way, guys like Graham Kendrick, any place I've gone in the world his songs are already there, it's just an amazing thing. I don't think anybody in America's ministry has been used like that. It's interesting to me that you get styles of music that are quote unquote very American and as a result they don't totally fly over here in the UK. British music seems to have no boundaries; it just seems to be loved everywhere."

What does the future hold, what can we expect from Bill Drake?
"I'm going to South Africa for two months and then from there I'm going to join the OM ship Doulos which is sailing to Australia and New Zealand through August. However, I'm going to jump ship and come to Spring Harvest and release this new British worship album and what I'm hoping will happen is my ministry here in the UK and in Europe is going to take a little bit of a shift. It's going to continue to be a mobilising mission thing and I think we'll keep some of the multimedia as well but I think we're going to try to start writing some songs and minister more and more that actually gets people to sing and participate in, even on the night, the great commission. So when this album comes out it's going to basically release 12 hopefully new worship songs on the market that will enthuse people to get more and more involved in what God's doing globally."

The opinions expressed in this article are not necessarily those held by Cross Rhythms. Any expressed views were accurate at the time of publishing but may or may not reflect the views of the individuals concerned at a later date.
About Tim Cockram
Tim Cockram worships at a church in North London and currently is a technician at a hospital in Hampstead.

Heyyy Bill my Dear friend & musitionary since the early nineties! It's been a long time & by God's grace exciting things has transpired in terms of our call to missions. I am so looking forward having you as the main speaker & artist at our Commisioning service on Sunday 30th September at the Evangelical Mission Church in Cape Town. Team of 7 going to India

hey man may the Lord richly bless u on the work u are doing.i attended your show in 2004 in Kimberly south Africa.the memories of that show i still treasure in my heart were brilliant and u were singing form your heart