Billy And Sarah Gaines: Duo dynamite from the husband and wife gospel team

Husband and wife duo BILLY AND SARAH GAINES have established themselves as one of the popular R&B gospel acts of the 90s. It's been a long haul, as Tony Cummings reports. 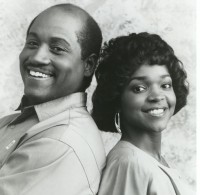 The brand new US release 'Love's The Key' seems certain to be another rung successfully negotiated in the success ladder for Billy and Sarah Gaines. The duo from Virginia have certainly paid dues in their 17 years in the wonderful world of showbiz.

It was in 1974 that Billy Gaines, a high school senior in Richmond, Virginia first met Sarah, then living about 20 minutes away in Hampton. Says Billy, "When I first laid eyes on her my heart stopped and I said, 'Lord, if I could only marry somebody like this." Though she had grown up in the church and was then singing in her brother's choir at Faith Temple COGIC in Hampton, Sarah admitted to Billy that she was not, in fact, saved. So, Bill explained to her the basics of salvation, he himself having given his life to the Lord at age 14. Salvation, Billy explained, didn't lie in the strict church rules about dress and abstaining from wearing makeup and jewellery to which she had been subjected while growing up. Sarah subsequently went home, put on an Andrae Crouch tape and proceeded to dedicate her life to Christ.

A few months after their initial meeting, in what would prove to be one of the most traumatic experiences of his life, Billy's nephew, who happened to be his closest friend, drowned in a local river.

The drowning became a turning point in Billy's Christian life. Says Billy, "That event jerked all the slack out of my walk because it made me understand my own mortality." It was a very trying time for Billy who decided to move to Hampton where Sarah lived to get away from it all.

In Hampton, Billy and Sarah joined Calvary Life Church where the spiritual foundation was laid for their ministry. "The whole focus of that church was training people for the ministry according to the vision of Ephesians 4:11. As a matter of fact, the perfecting of the saints for the work of the ministry is what Sarah and I are all about. We were prepared there to go out and help prepare others so that they too can go out, and that's how we look at our ministry."

Billy and Sarah began performing together not long after they met. "The first time we sang together was at Sarah's church at the urging of her mother, and in 1975 we formed a group called Living Sacrifice," says Billy. Even at that early stage Billy and Sarah were perfecting a funky, R&B style of gospel. "We thought we were the only ones performing that style of music at the time, and then we heard Andrae Crouch." Things began looking up in 1978 (a year after having tied the knot) when they began touring with Danniebelle Hall. But a recording contract was not quick in coming. Says Billy, "We spent the first 11 years not really knowing how to go about obtaining a contract." Eventually, just before giving up they were signed to Onyx Records (at that time hot with Vanessa Bell Armstrong) in 1982, only for the label to fold up a year later before they could record an album.

On a visit to Gospel Music Week in Nashville, the Gaines' caught the attention of the executives of Lorenz Creative Services. They were offered a songwriting contract with the condition that they move to Nashville. "It took seven months to decide whether it was the Lord's design or simply human advice... and whether or not I was going to do this wholeheartedly," remembers Billy. "But, I had to take a step of faith and do it. Either I was going to try and succeed or try and fail. If I didn't try, I would never know."

So, 1985 found the Gaines family, which by then had grown to five, moving from Richmond to Nashville. And all the waiting paid off the following year when the Benson Company offered them a recording contract. They were told by record company executives that there was no place for their contemporary R&B style (the style they now employ on their albums). As a result, their first album, released in 1986, featured a more orchestrated, inspirational sound that would be accessible to more Christian radio stations. Says Billy, "We've found that if you don't know exactly what you want to do, there will undoubtedly be somebody there to decide for you."

The execs who'd placed Billy and Sarah in the inspirational/middle of the road straight jacket at first thought they'd called the right shots. The 1986 album 'Billy And Sarah Gaines' spawned some popular Christian radio songs "He's Risen In Me", "You Are Faithful" and "Come Drink At My Table". In July 1988 their second album 'He'll Find A Way' was released. But the market place was beginning to change. Another duo, BeBe And CeCe Winans were demonstrating that the world was now ready for R&B/soul style gospel. Billy and Sarah's next album 'Friends Indeed' was a soulfuller, funkier affair and was a smash both in black and white Christian music markets. Number one Christian radio singles, Dove nominations, suddenly whole new vistas of success were opening for the veteran husband/wife duo. With the release of 'No One Loves Me Like You' and helped by Benson's secular distribution pact with A&M, the group were being tipped to be the next Christian act likely to cross over. Through all the upward curve of success the duo have tried hard to keep their feet on the rock and their focus on the family.

The Gaines have three children - Jason, Rachel and Nathan - who are all musically talented. In fact, the entire family recently worked together on 'Love's The Key'. One important duty Billy and Sarah have undertaken in addition to recording and touring is home schooling their children. "Initially, we began home schooling the kids out of necessity because we travelled with our kids on the road in a van. But now because they've done so well at home, we don't want to stop," comments Billy. While husband and wife business partners can often encounter problems working together Billy says, "(Our partnership) is a dream come true, to be able to be married and minister together. It's not a challenge; on the contrary, it's a blessing. The challenge would be if one of us was doing this and the other one wasn't." As far as the role each plays in the ministry, Billy notes that though they function in different capacities, their roles are equally important. "I write the songs and do most of the talking in concert, but Sarah's role is just as important. As far as ministry is concerned, our family comes first because we believe that maintaining a quality family life is a prerequisite to our ministering. Sarah's a wife and mother first, and she would give up singing and recording in a minute if she felt that her familial responsibilities were threatened in any way. And it's the same way with me."

I got a double blow today, first to hear that Sarah passed away and then to learn that she and Billy had been divorced for close to a decade. My wife and I played their CDs on endless loops in the late 90âs. Yesterday, i stumbled upon their album on Spotify and decided to look them up

Sadly Sarah Gaines went home to be with the LORD January 17, 2019

Min. Billy Gaines is still serving the Lord. He is currently leading praise and worship at Victory Temple Atlanta Church where he is doing an incredible job. He is now ordained as a minister in this fellowship and he is excellent in the word as well as music.

My husband and I sang many of Billy and Sara's songs. They were a great blessing to us.
Sadly I heard from a reliable source in the music industry that they are now divorced and
have been for years. Is this true?

Billy and Sarah songs are such a blessing, my son sang one at my sisters wedding...sadly your right Billy and Sarah are no longer together he is remarried.

I first seen billy &Sarah Gaines at Bethany World prayer in
Baker, Louisiana loved their songs
they were a blessing to me

I first heard of billy and sarah gaines in 1994 on cassette and they sang a song love is the reason, or the song's climax is sang 'and love is the reason I long to be with you' . I looked for the song to be played in my wedding in 1996 but was unsuccessful and sad. However that song and many others have continued to inspire me. If i could only get that particular song, not quite sure in which album the song is found, i would appreciate. God bless the gaines. Amen

Hi Ma'am. That song was my wedding song in 1995, and I am also trying to get a copy. My cassette was destroyed. Do you know how I can get it as well?
Seelan Govender, sgovender@worldonline.co.za