Brandon Heath: Lamenting the Fall of Man on his latest album 'Leaving Eden' 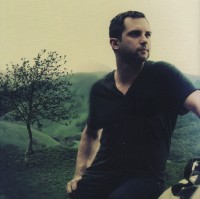 The last time Cross Rhythms wrote about Brandon Heath he was enjoying a Christian radio hit with "I'm Not Who I Was". But it was "Give Me Your Eyes" from 2008's 'What If We' album that broke the Nashville-based singer/songwriter into the big time. It was the number one song on US Christian radio for an astonishing 14 weeks, won a Dove Award as 2009's Song Of The Year and was even utilised as the official wake-up song for the Endeavour space shuttle crew! Yet rather than do what the CCM suits would have wished and replicated his breakthrough album the 31 year old songsmith has used his new album to create his most thought provoking, challenging and brutally honest album so far. Wrestling with personal demons from decades past - his parents' divorce, a painful break up - he has used his latest Reunion Records album 'Leaving Eden' to examine the Fall of Man and to mourn Adam and Eve's original sin and its consequences for us all.

Brandon spoke to Jesus Freak Hideout about the concept behind the album. "I really kind of want to mourn what happened in Eden, because I feel like we all feel the repercussions of that, which is sin, but also if we're leaving, I would like to be walking in the direction of Heaven, walking in the direction of hope. And so I wanna examine my own life and see what are the things that are pulling me away from Eden? And what is my apple? You know, what is my knowledge of good and evil? There are several things that I feel pull me away from Eden. And then the rest of the record really talks about hope. I think it's okay to lament a little bit. In the Psalms there was certainly a lot of lamenting, but there's also rejoicing in knowing that we're headed to a very glorious place. And I feel like I'm full of hope for that."

The first single from 'Leaving Eden' was "Your Love", a song co-written with Jason Ingram. It was a Heath/Ingram collaboration which had provided the singer/songwriter's award winning hit "Give Me Your Eyes". "I had prayed that first morning of writing that we not write under any pretence or any pressure to deliver a hit. Which I love that it is a hit now, but that morning we just wanted to write it, we wanted to keep it simple. And we feel like if God put any priority over everything, he would just want people to know that we're loved, you know? Like, he just wants us to love each other and love him, he would want us to know that we're loved. So it really hinges on love.

"I wanted to maybe talk about some accomplishments, like climbing a mountain, whether it would be the corporate ladder or literally climbing a mountain, all these achievements that we make in life don't really mean a hill of beans if we don't understand that we're loved. So even if we fail, when you're loved, it doesn't matter if you fail or succeed. You're just covered, you know? And that makes you, I think, lead a much more confident life, knowing that you really can't fail." 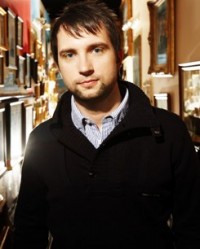 Brandon spoke to Christianity Today about the 'Leaving Eden' title. "I got a lot of pushback on that title, because it sounds so dark. But I want people to know that healing has been a big part of my journey in the last three years. It was prompted by a really hard break up. It's tough on somebody who has been looking for a long time and wonders, Man, am I ever going to get married? I went to a counsellor after this break up, and we went really deep into my own history. My counsellor said, 'Let's go all the way to the very beginning. Let's talk about sin. I want you to mourn the loss of Eden. Because it's something we all struggle with, and it's the root of all problems. And if you don't ever really face it, you'll always hold a little bit of bitterness.'

"So leaving Eden is really a process of healing-of realising, yes, we're walking away from Eden, but there are two directions we could go: One, in the direction of hope, or the other, in the direction of hopelessness. The album moves more in the direction of hope. The song 'Leaving Eden' lists a bunch of headlines and says, 'It feels like I'm leaving Eden. It's like I'm further away with every step I take, and I can't go back.' I believe there are pieces of Eden that still exist within our hearts, little pieces of innocence that we need to protect. If I have any kind of addiction, it's watching the news; CNN is always on. But news can lead us to fear; we give it so much power over us, and that's dangerous. Which leads me back to Eden, where the first temptation was knowledge. That's still a temptation for me. It's the apple I've eaten for too long, and I want to move on. So that's why I thought the title was appropriate."

What did Brandon hope people would get from the album? "I hope they'll be entertained, one. We've put some great beats on this record, and I've walked down some new avenues. The song 'Might Save Your Life' has kind of a Genesis sound, especially on the toms, like Phil Collins. I've kind of borrowed from some of my musical heroes on this one. A few songs in particular, 'Only Water' and 'As Long As I'm Here', I hope they resonate more with listeners. I feel like they have a sense of a story being told. I would describe my music as acoustic pop. Maybe more pop with acoustic in it. I used to be more acoustic pop, but now I'm just like pop. It's got a lot of beats to it, but know that I am a songwriter, and lyrics are still the priority for me, so I spend a lot of time on my lyrics. And I have like a handful of guys that I write with. I'm kind of picky on the co-writing. But I would say it's pop music with, you know, deeper than usual lyrics."

One of the outstanding tracks on 'Leaving Eden' is "Only Water", composed by Brandon with Lee Thomas Miller, the country songsmith who last year won the Song Of The Year at the CMAs for "You Should've Seen It In Color". Remembered Brandon, "[Lee] had been writing with another guy and they had the idea of 'only water'. Lee said, 'Let's call Brandon and see if he wants to write it with us.' So they called me in and told me the idea, and the song almost wrote itself in about an hour. By the time we got to the last verse, Lee said, 'There once was a wedding/All the wine was gone,' and I was like, 'I know where you're going.' I added, 'They say he's just a man/That's where it all began/It was only water.' That was a moment where you sit back and think, This song is going to touch people. Water plays a significant role in the world. We're made of 75 per cent of it. It covers most of the earth. God has used it in amazing ways. But it only has power because he gives it power. We often forget how much power we have, because God is with us and in us. God can do a lot with just one person."

An equally powerful song on 'Leaving Eden' is "The One". Said Brandon, "That was an eleventh hour song, and I was begrudgingly writing it. I was literally out of ideas; I had nothing. I was on the internet looking at the news. [Civil rights activist] Dorothy Height had just died and President Obama was at the funeral. I thought, Man, she was just one person, and look what she did. She overcame adversity and made a difference. I had a feeling that she must have known Jesus intimately. I recently heard a pastor say, 'Most of the social change that's happened in our country was brought about the Church. Most people think the Church is trying to keep them from changing, but that's not how the Church works. We are the ones who are supposed to bring social change. And it's through love and not hate that we get things done.' And I thought, Man, you're so right. Most people think the Church is here to keep you from partying and having a good time, but we're the ones that are shaping the future. And that can start with one person."