Brighton: An AOR band who hail from California, USA, not Brighton, UK 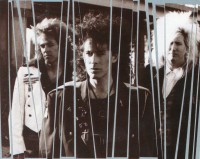 Brighton's debut album 'Promise Of Love' created enough favourable response from both AOR and indie fans to show that here was a band with bags of musical potential. But beyond the heads - down rocking is a band with a serious desire to minister. I met David Brighton at Holland's Springrock Festival. First off, tell me about the personnel changes in Brighton since 'Promise Of Love'.

Who is in the band?

You're the founder member of Brighton?

I understand from the bio that you became a Christian when you heard Bob Dylan!

"Actually not when I heard him, but about the same time he started to do gospel music I came to the Lord. I had a good friend I grew up with who was taking time out of his life to witness to me, telling me about the Lord. He finally got me looking towards God and what He did, got me to read my Bible. I had grown up as a Christian, then grew away from God in my teens and got into the rock 'n' roll thing and was playing in Hollywood clubs with a lot of groups. But I was searching. I was hungry and the answers I was looking for were found in the Bible. But I never looked, really. I had never opened my eyes to it. God started to reveal himself to me through the New Testament. This friend started taking me to church and my relationship with the Lord deepened and deepened."

You grew up in a Christian home?

"Well, half-Christian. My mother was a Christian; my dad believed in God and went to church and stuff. I thank God for my upbringing, but I should never have stopped going to church."

"I was given the opportunity, the world, the sparkle of fame and fortune and all that stuff was getting my attention. The pressures that teenagers go through, the lust of the eyes and the pride of life as the Scripture says, all these things were driving me away. Since I wasn't in a good Bible-based church or anything my relationship with God wasn't growing, but I thank God he brought me back."

After you became a Christian did you continue playing music?

"For about a year the Lord pulled the bottom out. Before that things looked like they were really going to happen. A lot of interesting things had happened in the music business and the group I was involved in. I was asked to play with the guys from Quiet Riot after Randy Rhodes went to play with Ozzy Osbourne. I was more interested in pursuing Brighton so I didn't take it. Things were looking really good. Then I came to the Lord and the Lord showed me some amazing things. He was blessing it but then he stopped it, because the way I was using it and the people I was playing with, it just wasn't what He had in mind. I went through a period of being broken. My ideal, everything I had in mind, was reshaped by the Bible. He brought me through a period of just seeking Him and not even knowing if I was ever going to play again. He orchestrated my playing with Christians, for churches and prisons and getting more involved in ministry rather than just career."

Was that time of transition hard for you?

Does anyone know if the lead singer is the same David Brighton that now does a David Bowie tribute show? It would be interesting to find out.

Yes, it is the same person.

For more on Brighton visit the Brighton artist profile