"I was very angry at the Church because I found it very irrelevant. But the very things I was complaining about, I was the one to stand in the gap for. Someone else was going to come through those doors and feel how I did and I could be there for them. I made up my mind in that club, on a Thursday night, that I was going to church on Sunday."

Two years after his conversion, he travelled to America where he rapped at Nicky Cruz crusades. "We saw crack houses being shut down, prostitutes getting cleaned. No one can tell me God ain't real."

G.I.F.T.E.D. is soon to set up home over the pond with his American wife and while there he hopes to champion the British hip hop cause. "I'm ready now. I have come out of Egypt and out of the wilderness. I'm full of confidence with my musical message and the angle God's given me to hit the mainstream without having to compromise."

The most unusual of all Britain's hip hop teams MICHAELIS CONSTANT spoke to Peter Bate.

Michaelis Constant has a way of grabbing your attention. "Imagine Trevor Macdonald, Trevor Brooking and Trevor Nelson sitting down for a discourse on necrophobia after an appetising evening meal with the sounds of Shirley Bassey and Trent Reznor tinkling happily in the background. This is Michaelis."

Not your average Christian rap group, then, if their press release is to be believed. With a name lifted from a maths textbook, a barrage of rhymes that bounce around the brain and stark, dank beats and samples, Birmingham's Michaelis Constant are infiltrators of the hip hop underground. 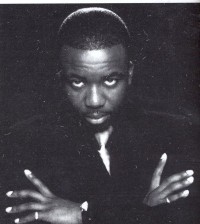 Birthed two years ago, the outfit's strikers, MCs Damaj, Tutall and Thinking are given strength and depth by DJ Log and producer Rich T. Their first live date was, ironically, at Birmingham's Winterval Festival, so-called because council chiefs didn't want to offend by using the term 'Christmas'! Rough and ready LP 'Foreign Correspondence' under their belt, interest gathering from secular pioneers including Roots Manuva and a string of live club dates to their bow, at the time of interview they are taking time out for "writing lyrics and praying."

Thinking, an American youth worker employed by Agape UK, explains, "We are not handicapped by a zeal for fame. Some of our peers are very talented but consumed with ambition and it's liberating to feel we are reflecting our manifesto already." Michaelis' mission statement is to: "Worship God/Keep our vibrations obscure/Incite vivid spiritual dialogue within the UK hip hop scene."

Lyrically inventive (with subject matter ranging from penalty shootouts to Omar Sharif) yet unafraid to spell out their faith, Thinking admits their presence in the secular scene can be an uneasy one. "How can we be blunt with our secular peers or normal club goers and ask them difficult questions and yet still entertain? It's such a difficult line to walk.

"Certain artists don't like it when we mention Jesus too much so there's already some sandpaper being rubbed on their foreheads. We want to be more prepared to worship God through what we do." Thinking, whose media degree at Luton University included a project on hip hop philosophy, recently organised a Christian gathering which drew 70 rappers, producers, singers and break dancers to Birmingham.

The event flew in the face of the egotistical posturing typical of the mainstream and proved a huge success. "For 15 minutes we turned off all the music and put the mics away and everyone just started rapping with no amplification at all. People walked into the circle, did a verse and the last line was repeated by everyone as a chant. It was beautiful and intense and gorgeous worship to God." Future gatherings are now planned and Thinking is buoyed by the state of the Christian rap scene.

"Labklik, Remnant Militia and a lot of rappers in the US really impressed me with their love for God and their hungry rapping. They wanted to excel and shattered any possible stereotype that you could have towards Christian hip hop. I think Christian hip hop is the best throughout the world in certain pockets. There's some not-so-good stuff but that's why we want to sharpen one another. If you look hard enough there are some real gems."