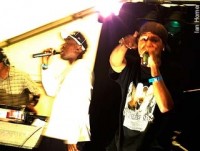 One of the more depressing aspects of the International Christian music scene is the slowness with which both the Church and the CCM industry have moved to support the sound of hip hop as a relevant means of communicating the Gospel message. In America, despite the pioneering efforts of dozens of black and Hispanic gospel rappers, hip hop still receives very little Christian radio exposure which seems to have ignored the fact that in today's secular marketplace hip hop rap now staggeringly outsells rock music. Predictably, in Britain too, Christian rap has been almost completely ignored by the Christian record companies (save for a brief dalliance by ICC when they released CDs by HOG and Watchman). Despite this, a small enclave has come to recognise gospel rap as one of the most effective forms of Gospel communication directed at today's disaffected youth. So there's grown up in Britain, a sizable underground, where gospel rappers and groups minister wherever they can get gigs - mainstream R&B/hip hop clubs, prisons, open air missions and occasionally church halls. British Christian hip hop began in the mid '80s. The first act to get onto recording tape were London-based Dale and Emil, whose "Why Don't You Look Into Jesus/D And E Rap" was an impressive contribution to the groundbreaking House Of God EP, released by Kingsway in 1986. But the rappers who really stand as the forefathers of the whole hip hop underground were HOG. Rapper Justin Thomas with DJ/MC Lee Jackson were out there gigging by 1987 and proved the lie of the fact that to rap you had to be American or at least black, Leeds-based HOG being neither. Justin began to develop his rapping style away from the stereotypical old school template into a dazzling free form, British style.

Justin and Lee have in recent years worked with the World Wide Message Tribe out of Manchester. The Tribe of course have long used rap as an element to their pop dance evangelistic concoctions and had in Cameron Dante one of the most arresting, rapid-syllable rhyme busters ever to rap over a careering house beat. But if the Tribe have become the acceptable face of gospel pop rap, for those locked into the earthier sound of the streets, British gospel hip hop has been missing from the CD racks.

Undoubtedly, the most authentic, creatively cutting edge gospel hip hop team for many years were London's hugely underrated N-Daze. Fronted by the brilliant rapper Paul Sevier (who now works under the persona of Royal Priest), N-Daze were one of the most anointed ministry units of the British scene. But lack of recordings and continually changing personnel stopped them from reaching the acclaim their huge talent deserved.

Now there is a new wave of British hip hop artists. Despite the British labels continuing to ignore the genre, the best of the British holy hip hop acts are taking the initiative themselves and producing some steaming music independently. Cross Rhythms sent out a team of journos to check out the scene.

M.O.D. (or to give them their full moniker, Ministri Of Defence) have created quite buzz since guesting on the albums by The Ambassador. Kwaku investigated.

If you think the Ministri Of Defence (M.O.D.) moniker of E'Miner aka Stranjah and Rob Ryme da Pilgrim has a militant ring to it, back in 1995 when they began, they went under the name PLO (People's Liberation Organisation)! 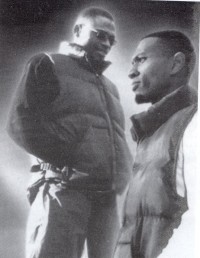 "It really recognised that the Gospel is that which truly liberates a person. That liberation is also to include the Christian young people who love the Lord but can't relate to the traditions and culture within the Church," said E'Miner of his former moniker. The name change was made in order to not offend their Messianic Jews supporters. Of the current moniker, Efrem said it represents their "desire to give a ready defence of the Gospel to the unbeliever, and to encourage the saints to keep the faith - based on 1 Peter 3:15 and Jude 3."

M.O.D. usually demonstrate their rap skills and God-centred message on the grassroots circuit - performing at schools, youth clubs, prisons, carnivals and such-like outdoor events. "When you've seen inmates on life sentences accept Christ with tears, or hugged a homeless guy on the street as he has turned to God, you kinda know that the work ain't over till the last trumpet sounds," enthused E'Miner.

Although they are working on an album for the Philadelphia-based Cross Movement's own record label, they aren't prepared to compromise. "We're just so aware that so many people, including those we know personally, have been shipwrecked trying to chase a record deal - even to the point of selling out their relationship with God," said E'Miner. M.O.D. exhort the Lord's name using a fusion of reggae, R&B, jazz funk and hip hop sensibilities. They contributed to a track each on The Ambassador of The Cross Movement's 'Christology: In Laymen's Terms' and 'Human Emergency' albums. They have three tracks on the imminent 'Inspire' compilation album, which is a West London Schools project. E'Miner also decided to experiment rapping on a garage music tip by guesting on Abundant's 'Guidance' album. On their debut album, look out for "Show Me Ya Fren", which deals with peer pressure by encouraging people "not to be trapped doing wrong things I trying to impress others", whilst "I Don't Luv You" looks at "our love as being nothing in comparison to God's love."

Whilst E'Miner admires the production skills of a few involved in secular rap, he has no time for most of its lyrical content, which he describes as "chaff". "Our purpose is to make the message of the Gospel accessible, and although hip hop was the biggest selling musical genre last year, the Lord puts us in front of so many people to whom that fact means nothing. So it's nice to be able to do something that they too will be able to receive," said E'Miner. "We're used to people not wanting to hear the Gospel, but we know that there are a minority of people who are into feelin' good hip hop, British or otherwise, and it is this hip hop community, among others, that we seek to affect."

In a world where there are so many negative images and few positive role models, Set Free bring a message of hope that meets you where you are, and takes you where you need to go." So proclaims the impressive web site (www.setfree-records.co.uk ) of very up-and-coming hip hop act Set Free. Known on the mics as Jubal and S.O.E. (Son Of Encouragement) and to their mums as Earnest Evwarage and Colin Thomas, the band has been together since 1992.I spoke to Jubal about the vision behind what is fast gaining a reputation as totally credible Christian music.