James Attlee went to watch BRYAN POWELL do the funky chicken and put across his 3-D message. 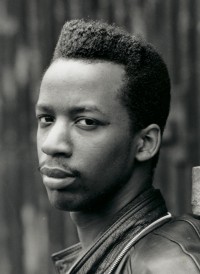 It is a scorching August afternoon at the Greenbelt Festival and the atmosphere in the Black Gospel tent is humid. The capacity crowd have already been moved by a superb performance from the super choir put together for the event and have danced to the reggae rhythms of Jamaica's Channels. Now many await with expectancy a set by a performer who is widely tipped to be the next graduate of the British Gospel scene to cross over into the big time.

The beginning of Bryan Powell's set could not be further from traditional conceptions of what black gospel should sound like. First to appear is drummer Steve Campbell who punches a button to let loose a barrage of percussive beats from his drum machine before settling in at the drum stool himself. Next up is percussionist Robert, adding another layer of complexity to the rhythmic backdrop on bongos. He is soon joined by Indian percussionist Satin on tablas (yes tablas) - by which time a beat has been set up which is so momentous that the audience are already dancing before the rest of the band take the stage.

This is a heavyweight backing group, with three keyboard players and four backing singers, the cream of London's gospel sessioneers, all drafted to showcase the vocal talents of the irrepressible Mr Powell himself.

When he does arrive on stage, Bryan begins as he means to continue - in motion. This is physical music, and in recognition of this whenever he isn't busy singing, and often when he is, he dances non-stop, alternatively bounding from one side of the stage to the other and doing the funky chicken midstage, back to the audience, elbows akimbo and face-to-face with the whiplash beat.

And what of that voice? Powell's got range and style, swooping from a falsetto to a throaty baritone with apparent ease, but this music is not constructed, as more traditional gospel is, to highlight intricate vocal technique. Today the guys seem to be having a party and each member stretches into a seemingly endless groove, but having said that the hooks shine through - its obvious the man can write a commercial song and still include gospel content. Stand out song for me, and the one with the most obvious chart and dance floor potential, was "Tell Me Do You Love Me?", with its insistent hooky chorus that's custom made for crossover mega-sales. I'm not the only one who sees the commercial potential of Bryan's songs apparently - he's already signed a publishing deal with BMG and looks set to land a contract with a major in the near future.

When Bryan's towelled off and is through talking with a crowd of backstage well wishers, including a very complimentary man from CBS records, we sit down and talk about the beginnings of his singing career, notably his years with that singers' university, The London Community Gospel Choir.

"I was with LCGG from 1983 tol988. It was learning while having fun, breathing techniques and stuff like that. You learnt but everyone else was learning at the same time, it was like a stimulant; we were enjoying it so it wasn't a big deal. You do learn and watch what people do. Some people are very contented to stay there in the choir and make it their lives - that's the kind of call, it's what they want to do. I was always doing little things outside the choir, singing in a group called Shamir, with Clarity, then I went solo - from around 17, 18 I decided I wanted to go for singing and I haven't really looked back."

Once he'd taken that decision, Bryan dispensed with the support system of day jobs and turned full-time musician.
"So many people have told me it's alright to be a singer but you should have something to fall back on'...I'm falling back on Jesus, I've got no botherations with jobs, working nine to five. Usually I try to please people, but when it came to that I knew where my commission was coming from."

Bryan who was born in Rugby, but raised in Hackney, East London - "where all the stars drag their way out from" - maintains his group have a clear sense of purpose behind what they do. "Our whole philosophy is to do music on three levels - mental, spiritual and physical. There hasn't been a band who's ever tried to do that, apart from maybe Earth Wind and Fire, and their spirituality was a bit here there and everywhere...We don't want to be too spiritual to be any earthly good, but then we don't want to be too money minded either. The whole trouble with gospel artists who've gone on to major labels is they're still doing albums like they should be on Light Records or something. You can't do traditional gospel arrangements for the wider market - you'd better find a chorus, you'd better find a verse people are going to remember, and I've learnt that over the years. I want to bring the joy I believe I have with me and spread it around. I will not sit down and fight with anyone just so my music can be called gospel - if its not gospel its new Christian music, contemporary or whatever...basically I'm singing about my life and my life has been Christ for the last ten years, and it hasn't budged one inch."

In some of what he says Bryan reveals the defensiveness shown by many gospel singers wishing to branch out musically, who are aware that their experiments will gain them some harsh criticism from more traditional sections of the gospel community. I asked him how he felt about the mind set that believes that Christians have to sing about Christ all the time. "It's worrying, because it means that with all God's greatness...how can we try and label God and trap him in certain boxes when the mind of God is so great? Yet we close our own minds to certain things. There's songs I want to write that edify those who are married and draw them closer to God, and there's ways of doing it...obviously I'd be singing to a girl and she'd be singing to me and some people couldn't handle that, which Is disappointing really."

Bryan would rather forge a new kind of music, as acceptable on the streets of his home patch, as at a gospel concert.

"I'm trying to bring the sound back to the ghettoes, to where it all began - to be able to approach people in Hackney with Christian music they're not going to look down on. Already I reckon I can get the respect because of my vocal ability...like we have a club in Hackney called the 291 Club at the Hackney Empire, and they have a talent show, and they rip people apart when they go out of key - boo, hiss, hiss - its like an Apollo thing." (The Apollo in New York's Harlem was long the home of the most discerning soul audience any new performer would be likely to face.) "But I know without a doubt that I can bring smiles on those peoples faces - they'll really deal with it. I have no qualms about lyrics as far as my music's concerned, I don't think I have to water it down to sell it, I'll just say what I always wanted to say.

"The main mission is to bring spirituality back to the people in a way they can relate to so I'll be able to minister to my cousins, and my friends cousins, people we know, whether they're black, white or Indian.

"We're not forcing it down nobody's throat, we're not arresting nobody - we're not doing no brainwash, we just want to share it, and spread a 3D message."