Caedmon: The Edinburgh folk band return after a 32 year wait

As they prepare for the release of their first studio album in 32 years, the reunited members of 1970s folk-rock band CAEDMON took time out to speak to Lins Honeyman.

Edinburgh-based Christian folk group Caedmon have the kind of back history you couldn't make up. In 1978 after a few gigs the group recorded a self-financed album. Recorded on a tiny budget over two weekends in a chilly Edinburgh flat the album featured lead guitarist Jim Bissett, Simon Jaquet on mandolin and percussion, vocalist Angela Naylor (now Webb), multi-instrumentalist Ken Patterson and bassist Sam Wilson - all of whom had met and studied together at the Scottish capital's main university.

With only 500 copies pressed, the 'Caedmon' album was distributed between friends, family and attendees at Caedmon's final concert in Edinburgh's George Square and seemed destined to remain nothing more than a keepsake for those nearest and dearest to the band. Several decades later however, the album, far from being forgotten, was being acclaimed as an unrecognised classic by fanatical folk roots collectors and copies were changing hands for up to Â£1,500!

Following Caedmon's split in 1978, the fivesome remained blissfully unaware of the cult following their short-lived student band would ultimately attract. Moving to Northumberland, Ken forged a successful career which has included composition work for television and stage productions whilst Simon and Sam have worked on a variety of musical ventures together and individually. Meanwhile, Jim formed a variety of eclectic bands and Angela, who became a trained vet, remains the only member of the group to actually do what she studied for at university.

Eventually Caedmon members were tracked down by specialist reissue record label Kissing Spell (the same concern who reissued albums by another much collected Christian folk group, The Water Into Wine Band) and in 1994 a CD of 'Caedmon' was released. It sold, and continues to sell, to folk-rock buffs with American archivist reporting that "some were proclaiming ['Caedmon'] to be the best folk-rock album ever recorded, Christian or non-Christian." Caedmon were persuaded to locate tapes of live performances made at Edinburgh's Charisma Folk Club in 1977 and Netherbow Theatre in 1978 and these were released on a Kissing Spell CD in 1995. But still the interest in Caedmon continued to grow.

Despite having separately pursued a variety of disparate and successful musical careers, all five members have decided to reform to write and record material and to begin gigging again. Now their brand new album 'A Chicken To Hug' - their first for a staggering 32 years - is due to be released at the end of 2010.

I caught up with the band as they put the finishing touches to their eagerly awaited new release and asked them why decided to reform after all these years. "It was near to the 30th anniversary of the band splitting up and I invited everybody for a jam at a little studio near where I live in Weardale, Durham," explained Ken. "It was on the basis that we would write and do all new stuff - it wasn't a written rule but that was the spirit of the thing. It's been an exciting and a life affirming experience. For me, it's been very important to get back together and make music again."

It seems not everyone was initially keen on the idea of putting the band back together, as Angela explained. "I'd got back in touch with Simon who said the guys wanted to get back together. I said they should go for it but to count me out - I'd barely sung into a microphone in 30 years. Over the next couple of years, they kept asking me to join in and I eventually agreed!"

So what did it feel like to be back together? "One of the things that struck me was, despite having gone off in different directions and having different views on life, in character we are in many ways the same people we were 30 years ago," said Sam. "It feels like we interact in a more mellow and tolerant way than we used to."

Added Jim, "When we met and played together again, we realised that we still clicked with each other. The only difference is the students who were originally in Caedmon have been replaced by some middle-aged guys!" 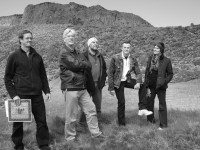 I asked the band to cast their minds back to when it all began. "Angela and I arrived at the first Fresher's meeting at Edinburgh University," Ken recalled. "We bumped into each other and found out we were Christians. There was this guy called Andy Love, who was in the year above us training to be a vet like Angela and I, and we thought it would be good fun to play together. There was a Christmas concert at the end of that term and that was the first thing the three of us played at. Then Sam and Simon came along but Andy left because he decided not to continue his course."

Continued Sam, "At the end of the first summer at university, we were all meant to get together in the Lake District to jam and come up with songs. Ken and Andy couldn't come as they both had resits so Angela, Simon and I stayed in this little cottage and came up with some songs that formed part of our live set."

"I was the last to join," explained Jim. "Caedmon were already a gigging band and, when Andy Love left, they made an announcement at a Christian Union meeting at the university to say they were looking for a new guitarist. I went to the front when the meeting was finished and joined the band."

Several attempts have been made to slot Caedmon into a variety of musical pigeonholes, from acid and psychedelic folk to folk-rock. In addition, Caedmon had been linked to the burgeoning Jesus Music scene of the time. This is something Jim disputes. "Although we were aware of other Christian musicians and performers, I don't think we saw ourselves as part of a Jesus Music scene. Instead, we were part of popular music explosion where everyone wanted to be in a band. Although we played plenty of Christian gigs, we didn't want to be 'ghetto' musicians. We wanted to be part of the same environment as secular musicians."

Added Sam, "I think there was a tension because people assumed that, because we were a Christian band, we would go to their church or their youth fellowship and sing to a whole bunch of people and then ask them to become Christians at the end of it. We ended up in that situation quite a lot but were never terribly comfortable with it."

It's interesting that we chose our name in 1973 and Caedmon's Call chose a name from the same story of a 7th century cowherd in 1993, exactly twenty years later.

I'm from Newcastle 50 miles from Whitby where Caedmon lived. I heard of the story when I went on a Christian Union houseparty in Whitby in 1970. Another connection is that Tony Welbrock Caedmon's soundman worked and lived there in 1979.

We must get a recording on Youtube of my 'Saturday neet, we're aal aalreet, Caedmon sing us a song' ditty, which has never been on record. It tells story of Caedmon in North Eastern English dialect.

For more on Caedmon visit the Caedmon artist profile