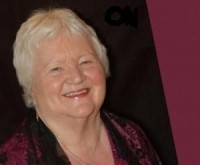 There can't be many singers who begin their recording career at the age of 77. But then there's nothing very usual about the Coventry-based Irish singer Carmel Silver. Her album of well known hymns and inspirational songs - including "The Old Rugged Cross", "How Great Thou Art", "It Is No Secret" and "Abide With Me" - was produced by the award winning Terry Bradford (Charlie Landsborough, The Fureys). Carmel's album 'He'll Be There' has brought her radio play and several accolades. In Carmel's own words, "God gave me my voice and this is my way of giving it back to him." Carmel came to the Cross Rhythms studio to tell her story.

"I was born in 1935 in a place called Chapelizod which is a village in the suburbs of Dublin and I was one of a big family. There were eight of us and many others who died. I grew up there. My mother died when I was 17. She died of cancer and I was with her when she died. Once she died the family disintegrated and we all had to go and find our own way and I eventually ended up in London. My mother and father were very religious, we went to church every Sunday. We never missed, I still don't miss it, and I still love it. But it's sort of part of me. My mother lived in dreadful appalling poverty really. They think people are poor now but they don't know what poverty is. All she had was her religion. She believed in God and she always. . . She used to pray every day. We prayed what we call the rosary in the Catholic Church. Every night we all said the rosary before we went to bed. My father, mother and all of us children. We knelt on an old couch, my father knelt on a chair but my mother knelt on the floor because she knew her place." Carmel gave one of her infectious laughs.

When she was 14 Carmel found herself in a boarding school in Lincolnshire. She explained, "One of my sisters was a nun and the reverend mother of the convent thought that I was a clever little thing and she thought I ought to have a chance. She said I could have a place in a boarding school in England. They sent me off by myself with this big case that was bigger than me and I went to Lincoln." She enjoyed her time ther, particularly singing in church. She recalled, "I remember a beautiful day, we had a service, there was a mast outside on the lawn and they got me to sing 'Avrim Via' while the flag was going up. I had a good strong voice, Charlotte Church sort of thing; I could reach any note in those days. But it didn't mean anything to me because I was always able to do it and nobody made any fuss of it, it was just something I did. And every night before we went to bed I had to go in and sing with the nuns, they always liked me to sing. There is a hymn called 'Salve Regina' in Latin, it's 'The Hail Holy Queen', and all the borders would be in the church at night and all the nuns would be there having their night prayers and I would get up and sing for them all."

Carmel continued, "I went to school there for two years. I was supposed to do the Oxbridge exam but unfortunately I got a letter to say my mother was dying so I had to go home again. When I went home I stayed with her and then she died just after I was 17. Eventually I worked for MGM Pictures in Dublin. But the television business ruined the film business and they started to close all the offices so one Friday I lost my job and that night I was on the boat [to England]." 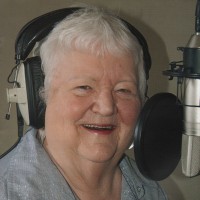 After different jobs Carmel ended up working for an agency that supplied maids and butlers for the rich elite. Later she worked as a girl Friday and one day sitting in a tea importers in Park Lane she decided she wanted to train as a nurse. She said, "I thought, well I have to do something positive, because nobody cared whether I was alive or dead so I went and trained as a nurse. Eventually I became a nursing sister over the big hospital in Walsgrave and Coventry but I worked in London first. Then I married a Naval Officer and went to live in Ireland. Went to work and then came back again. So I came back [to England] three times."

The decades rolled on. Carmel had often been asked to sing in churches in the Coventry area to raise funds for charity. She was particularly in demand on St Patrick's Day and still sings to an audience of over 3,000 people in Spain. But then Carmel contracted cancer. She explained, "I got very ill. While my brother was dying of cancer I discovered that I had cancer myself. I had an operation and I had radio therapy afterwards. I was so happy and so relieved that I survived it I just wanted to say thanks to God for what he had let me do, that I'd got through. The only way I knew how to thank to him was to sing the hymns because they are all in praise of God. So I decided to make a record. I knew it would cost quite a bit but it seemed much better than a fur coat."

Carmel explained how she made contact with top producer Terry Bradford. "Some years before somebody else had heard me singing in an Elders Irish Centre. I've always sung acappella. If anybody wants somebody to sing, I don't mind doing it. I was singing in this particular place and this man was walking up the road in the city and he heard a voice and he followed it and he eventually came in to where I was singing. He said the hairs stood up on the back of his neck and asked me how long had I been singing like that? I said, 'All my life.' And he said, "I have a friend who is a record producer and I'd like you to come and meet him," and he took me to meet Terry who used to live in England then. And when Terry opened the door and this man, Colin was his name, he was from County Armagh, said, 'This is the woman I was telling you about.' And I could see from Terry's face that he was shocked because he saw an old, white-haired woman standing on the step."

Carmel laughed then continued, "Terry said if I was any good he would record me. Well this time I wanted to be recorded. We drove to France. My husband drove down to the Dordogne where Terry had moved to and I asked him, would he let me record some hymns? He was a bit wary at first because he had never done anything like that before. But he's so famous and he's a genius, he knows what to do with every piece of music he hears. And as soon as I sang, he had a whole plan for all the musicians and what would go behind my voice." 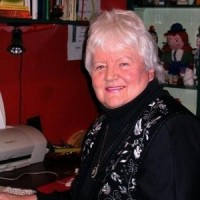 One of Carmel's favourite tracks on the album is "God Of Mercy And Compassion". "It's always made me feel at home when I sing it and when I was at my worst and I was feeling really bad I remember getting in the shower one day and just singing it to myself and I could just feel myself feeling better because I was asking for help. It seemed to come to me when I asked. I like all of them really, I just love singing hymns, I've always done all my life. It seems more natural. Every year I go to Spain and I sing in a church there on St Patrick's Day. They have a Gaelic Mass and I sing 'Our Lady of Noch' which is an Irish hymn. So I sing that there and then we have a parade and we go to a park and about two or three thousand people go to the concert and I sing there on the stage."

Carmel believes that 'He'll Be There' has a relevance way beyond a Catholic listenership. She said, "It's to give hope and inspiration to everybody, I mean there is one song on the album, 'What A Friend We Have In Jesus', which is a Salvation Army hymn. The album is really for everybody. It is to give hope and inspiration after having two bouts of cancer. I had a double bypass three years ago as well. I was never ill till I was 73. But if I can do this and I'm still walking around, and you wouldn't know by looking at me [what I've been through] and I don't feel that there is anything wrong with me, then it must have come from somewhere. I like to think that God gave it to me and I want to give it back, you know, tell people, that's who did it."

Carmel silver,s song He,ll be there is a brilliant inspiring song.It gives you food for thought in this ever troubled world.I LISTEN TO IT ON YOU TUBE EVERY DAY. .I wish Carmel the very best life can bring for her.

I met Carmel at a pub in the Dordogne on Friday 17th Jan 2014 and she sang 'The Fields of Athenry' for me. She is a lovely lady with a beautiful voice and I can recommend her album 10/10. Well done Carmel!!!

found this a little confusing was carmel married twice