One of the brashest voices in British rock belongs to a quiet shy girl called Caroline Alexander. Mike Rimmer reports. 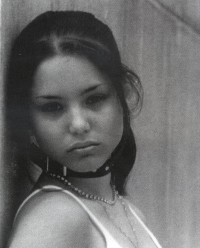 Appearances can be deceiving! If you have heard Caroline Alexander's debut singles "Fake The Blame" or "Don't Need You" or caught her high energy live performances around London, you'd draw some pretty straightforward conclusions about this young singer. Exotic punk looks, uncompromising attitudes and loud confident stage behaviour are backed by moody publicity shots.

Monday 2nd July, Caroline is visiting Cross Rhythms radio but she's feeling a little under the weather, shaking off a bug that stopped her performing live at the launch party for her 'Unplugged' EP the previous Friday. Caroline Alexander is a bit of an enigma. Petite, polite, photogenic and shy when you meet her and totally different to the girl I'd expected to meet. I joke that perhaps it's because she's under the weather. "No, I'm quite shy actually with meeting people and stuff," she explains. "People say I'm quite scary when I get behind a microphone but when people meet me in person, it's a different thing and they decide I'm not really mad and scary in real life!" It was at school she started singing and was involved in theatre productions. She comments, "I did some songs written for plays and obviously some famous musical shows as well, but more original written material too."

Already Caroline's recorded output shows that even here she refuses to be pigeonholed. Two angry vibrant singles, a live raw mini album recorded at the legendary Dingwalls club and then the complete opposite: a gentle unplugged album. "I have very different tastes in music," she confesses, "so I like to show people what I can do. What I'm capable of. They're just two examples. I can't say which I like best. There's a few songs on the 'Unplugged' album I prefer but then there's a few songs on the 'Live At Dingwalls' album I like because of the energy and I can remember the moment."

Caroline is an independent artist on the verge of being signed and it's safe to say there's been a bit of a bidding frenzy amongst labels trying to sign her. Along with label interest, there's also the pressure for her music and looks to be moulded in their image and not hers. She explains, "There's this thing about some major labels liking the way I look and the way I could come across. They see I could be marketed as a Britney or a Billie and I really don't want to do that. I went with a manager. I listened to what they were saying. Obviously they know a lot about what they're talking about. I let them hear my stuff. A lot of them liked what I was doing. They liked the things they'd heard and seen but they'd quite like to put me slightly more in the pop field. I really scared one person in particular. He saw the video and the size of my mouth when I was singing a high note and he just freaked out! I haven't really spoken to him since!" In the end she did get a great song from the experience since her second single "Don't Need You" is all about her encounters with record labels.

Back on the radio, even an under the weather Caroline pulls out the stops to perform songs from her new album accompanied by her guitarist Al. Eyes shut and sitting down, she suddenly unleashes the most incredibly passionate high notes that ring around the deadened walls of the studio. She's right; those high notes can be quite scary!

The unplugged CD contains "You Care For Us" as a bonus track. It was recorded at ICC studios when Caroline was 16. She remembers, "I was making a demo of about five songs, this was one of them. It was a really cool experience for me, recording those. It was at the same time I recorded a track called 'Healed'. One of Split Level's songs, written by Adrian Thompson. That was an experience! I spent the whole night, I think, in the studio doing all these strange backing vocals." A few years later when Caroline performed "Healed" at Greenbelt she says, "Adrian was going to come and watch my live set because I do the song in my live set too. He threatened to jump up on the stage if I messed it up!"

There are many artists who would like to be signed to a mainstream label and many people would envy Caroline's current position. She has nine offers on the table from Europe, Japan and America for her next album. She's had to change her phone number because they're all ringing up, trying to make her make up her mind! She admits that it's scary. The companies include BMG, Pony Canyon and JVC Victor. Caroline comments, "Obviously I want people to enjoy my music and enjoy what I'm doing, that's the whole point of doing it. It can be quite frightening though to have so much interest all at once. Don't get me wrong. It's not that I hate it, it's just a bit scary."

Caroline is taking her time deciding what to do next. She admits, "I'm not completely there yet, so I need time to make my mind up. Once I've made a decision, I very rarely move away from that. At the end of the day though, I weigh up things in my mind. It depends on how I feel about something. That's how I make up my mind. I do listen to advice I'm given." I wonder whether she prays. She vulnerably admits, "I have prayed recently actually...you're the first person I've told that to! I'm hoping someone can help me make this decision because I don't know if I can make it on my own."

When it comes to faith, Caroline was brought up in a family where she describes it, "We don't go to church all the time. We go on special occasions like Easter, sometimes Christmas and things like that but I've been brought up with Christian values. I think that's an important thing. To know the difference between right and wrong, that's very important and to stand up when you know things are wrong."

Half of Caroline's band are Christians and she's playing at places like Greenbelt though mainly concentrating on getting into the mainstream. It's obvious that Christian ethics are important to her but she wouldn't yet describe herself as a Christian. As a young teenager she went to the Wembley Stadium praise event organised by Noel Richards. She remembers, "The whole day was quite an experience for me and by the time we got to the evening and they were doing some worship songs and things, I just felt really touched." In response to an invitation to get to know God she says, "I raised my hand. I felt touched at that moment in time. But I see that as an experience on its own. To be honest with you, I hadn't really thought about it much since until you brought it up just now. I was quite young at the time. I just remember that I felt something."

Clearly this isn't a subject that Caroline feels easy to talk about if only because in her own mind she is still thinking through what she actually believes. "I still believe there is a God. I know that there's something there, but I don't know exactly what. In my own mind, it's something I've got to figure out for myself." Perhaps the analogy of faith as a journey would be appropriate here though Caroline honestly admits, "I'm kind of in limbo at the minute I suppose."

So what's stopping her from becoming what I describe as a "card carrying Christian"? Again Caroline searches to elaborate her feelings, "I don't think I can answer that question. I just think I'm not ready for it yet. I think that's the main reason." It's yet another way in which Caroline is an enigma. It's intriguing that she has a strong ethical element coming through the music, yet she doesn't have the intimate faith with God that works hand in hand with that. I confess to her that I find this curious and she admits, "It's curious for me too actually. I really haven't figured it out yet. It's a personal thing and until I do figure it out, I wouldn't be able to explain to anyone exactly what it is because I need to work it out for myself. When I do, I promise I'll tell you!"