Carrie Underwood: The country star says there's something in the water 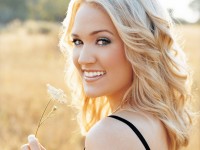 Country superstar Carrie Underwood is currently enjoying another hit in the US with the single "Something In The Water". As one journalist reported, "Carrie Underwood has gone full circle to cap a decade of hits with another faith-inspired song. It's already been a decade since the country star exploded onto the music scene with her winning appearance on American Idol in 2005 and her first big hit, 'Jesus, Take the Wheel'."

Carrie, born in 1983 in Muskogee, Oklahoma, has come a long, long way since she first sang in her local church, First Free Will Baptist Church. After winning the fourth season of American Idol in 2005 she has enjoyed staggering success, selling more than 64 million records globally, winning six Grammy Awards and having had 14 number one country music hits. Now, with the release of "Something In The Water", a song she co-wrote with Chris DeStefano and Brett James, she sings a song which speaks boldly about conversion, baptism and keeping the faith with lyrics which include the lines, "I followed that preacher man down to the river/And now I'm changed/And I'm stronger/There must've been something in the water." The song ends with an interpolation of "Amazing Grace" before Underwood powerfully sings out a portion of the hymn.

In an interview with the Today TV programme she described "Something In The Water" as a "joyous, uplifting song about changing your life for the better and waking up and having that a-ha moment and your life being different from that moment forward." Talking to Esquire magazine the 31 year old country superstar said, "After I released 'Jesus Take The Wheel' people started saying, 'Oh, it's kind of risky. You're coming out with a religious song.' I was thinking, 'Really?' I grew up in Oklahoma, I always had a close relationship with God. I never thought it was risky in the least. If anything, I thought it was the safest thing I could do."

"Something In The Water" is the first track on Carrie's latest double CD 'Greatest Hits: Decade #1' which also includes "Jesus, Take The Wheel" and her duet with Vince Gill, "How Great Thou Art".

In 2010 Carrie married professional hockey player Mike Fisher, also a committed Christian. She told interviewer Gabe Lyons that the itinerant nature of their respective careers has made it challenging, at times, for them to stay connected, commenting that even Skype has been insufficient. When asked what single issue has caused the most conflict in their four-year union Carrie responded before a laughing live audience, "Well, I'm an animal lover and he's a hunter." She added that this issue was particularly challenging because while she feels passionately about animals, Fisher feels more connected to God while out in the woods. In the same interview Underwood credited Nashville, in part, for providing a safe and welcoming environment for her to practice Christianity, unlike New York City or Los Angeles. "It's easy to be a Christian in Nashville," the Grammy winner explained. Recently the singer announced that she and her husband are expecting their first child.

Despite Carrie's latest hit and her profession of faith in several interviews, Carrie has recently received criticism from conservative evangelicals when she told Allure magazine that she was a supporter of gay marriage. "I'm in favour of acceptance. And I am a Christian person, and I do love the Lord, and I feel no matter who you are, what you believe, how you live your life, it's not my place to judge. As a married person myself, I don't know what it's like to be told I can't marry somebody I love and want to marry. I can't imagine how that must feel. I definitely think we should all have the right to love, and love publicly, the people that we want to love."