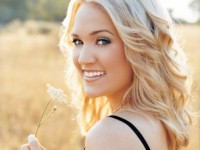 COUNTRY SUPERSTAR Carrie Underwood, who next month will be releasing her new album 'Cry Pretty', was interviewed in the 20th August 2018 edition of Music Week magazine. Talking of the album she said, "With so many celebrities you know everything about them, but in my past, I have not been known to share a lot. That's why a lot of my songs previously have been about characters, because it's easier to get dramatic when you get that distance. But this one I feel like a lot more of it is in first person, a lot more of it is diving deep." Carrie has sold over 64 million records, has over 2.6 billion streams worldwide and won over 100 music awards including seven Grammys.