Chaos Curb Collaboration: A worship music collective with a heart for social justice

Into the modern worship marketplace where many albums are increasingly being criticised for their predictable and formulaic sound has just been released an album of worship songs which won't get any such critical barbs. The self-titled album by Chaos Curb Collaboration, issued this month by Joining The Dots Distribution spectacularly sidesteps the U2isms and Brit pop stereotypes of many albums while the lyrics are fresh and creative with a challenging emphasis on social justice. Chaos Curb Collaboration aren't a band but a collective of musicians brought together by co-producers Dave Griffiths and David Evans.

Griffiths, who for several years fronted the popular grassroots band Bosh, wrote or co-wrote all the songs on 'Chaos Curb Collaboration'. He spoke about the vision behind the album. "We feel it's vital that the concept of worship is not restricted to singing in church halls but is recognised as also being a very practical outworking. Chaos Curb encompasses the visual arts, and also community, with regular gatherings happening in Bournemouth. I have longed to see a more cohesive joining together of 'frontline' kingdom organisations with Christian artists to create useful resources for the church. Our mandate Scripture is Isaiah 58 verses 6-12 and we want to explore what it means to be Jesus' hands and feet in the society we live in. The project has intentionally brought together elements of the Christian music scene in the UK, from people in the Newfrontiers movement, to people in the Vineyard stream. From people in the biggest of Christian bands (such as Tim Jupp, one time keyboard player with Delirious?) to unheard of, faithful and talented church musicians. We are working closely to support the work of the Foodbank Network, run from local churches across the UK by The Trussell Trust. This is a partnership we began with the 'Fruit Tree' album Bosh made with friends last year."

One of the contributing musicians to the Chaos Curb Collaboration is Marc James, whose work with Vineyard UK and blues rockers Verra Cruz has made him a pivotal figure on the British scene. Said Marc, "I think what makes this album special is that at the heart of Chaos Curb is the heart of Dave Griffiths and that at the heart of Dave is Jesus. Dave is an encourager, a striver, a hard working musician and a fierce pursuer of all things Jesus related. I personally appreciate the honesty and the challenge of some of his lyrics. The album also has a great sense of groove and arrangements are generally edgy and dangerous. It was great fun to be a part of this experiment."

Equally enthusiastic about Chaos Curb Collaboration is Tim Alford who until recently fronted the band [dweeb] and who plays drums on a number of the tracks. He said, "I'd say two things. Firstly, a good number of the tracks on this album are like no other congregational songs I've heard stylistically - yet they still work for a congregation. The genre and the soundscapes of these tracks are very different, but the melodies are strong and simple enough to pick up for a congregation. I lead worship in my local church and I often find myself frustrated that every song sounds the same. This is an opportunity for bold worship leaders to break the mould and try something different, to inject some creativity in to their congregational times of praise. Secondly, I'd point to the lyrical emphasis that runs throughout. It's a record that doesn't just stop with singing praise and encountering Jesus, it puts a strong emphasis on the outworking of our worship into action. I also like that we use 'us' and 'we' language rather than 'I' and 'me'. In that way the songs become truly congregational."

Grant Howard was a member of Bosh and helped Dave write the Chaos Curb Collaboration song "People Around Us". Grant also put some piano/keys parts on the song plus another, "Let Freedom Reign". For Grant the golden moment of the project came when he first heard the mixes in Bournemouth's The White Office studio. "What really impacted me was listening to the mixes for the first time was strongly sensing the Spirit of God over the songs. Chaos Curb is about stirring up ourselves and those around us to become so obsessed and in love with Jesus that we might begin to start living like him and see the world around us changed by him."

Not everything on the album was recorded in Bournemouth. Deborah Hartup, member of Vineyard Music's renowned Burn Band, made her contribution at her home studio in Chorleywood. She explained, "Being quite pregnant at the time the most practical way of recording was from my own studio. I managed to get my folks to look after my little girl for the afternoon while I worked on 'New Songs' and 'Breathing'. It was amazing. In the business of motherhood and life, as I started to sing through the takes for the songs, it suddenly felt like a little spiritual oasis for me. I really felt such freedom to worship in the Spirit which can be really hard in a studio setting. That's the thing I loved about working on the album, whenever I got a song through to work on, I just really enjoyed having space to worship on my own, be creative and sing some great Scripture-based worship songs. It's a real privilege to work with these guys."

In fact Deborah's vocal on "New Songs" gave Dave Griffiths his particular golden moment. "My standout memory would have to be when I first heard what Deborah had done with the vocals on 'New Songs'. I had the idea for the song in the shower one morning and sort of wrote it really quickly. I sent the demo with me singing on it to Debs as I am a big fan of her voice. She then went and recorded her take on the song and sent it back to me. I opened the file on my computer just before heading out and I was shaking the rest of the night because her vocal was so anointed. It just floored me."

The fact that 'Chaos Curb Collaboration' avoids the stereotypes of so many modern worship albums is evident to any listener with the album taking in everything from big beat rock, '80s-tinged electro, blues-based balladry, dance-edged numbers and more. Commented Steve Coates, who contributed some guitar work to "Insatiable", "People Around Us" and "Blow My Mind". "It was fun to be able play on a Christian track and not have to sound like The Edge." Dave Griffiths said, "We set out to make music that didn't have the same old production sound that you hear on so many mainstream worship recordings. We used lots of weird and wonderful synths and iPad apps to texture the songs. The musicians put a lot of really original parts down and made the songs deliciously fresh sounding. The grooves are groovier and beats phatter than a lot of worship music I hear." 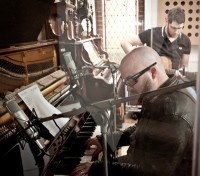 Added the album's other co-producer David Evans, "So many worship albums have a kind of cookie cutter approach; same guitars, pads and safe vocals. This is definitely pushing the boundaries of what worship music can sound like. Worship should be a huge varied thing that reflects some of God's amazing creativity. This, and the sense of bringing loads of ideas together from all these musicians who were involved."

For Evans, one of the most vivid memories of the countless sessions which took place between March 2008 and January 2012 to complete the epic album took place when Delirious? man Tim Jupp came to the Old Chapel Studios near Chichester, to play piano on the song "There Is". Remembered Evans, "Dave was singing and playing guitar, Mike - his brother - was drumming and Tim was playing the piano for this song over and over again. The guys really got in to the zone and there was a huge long silence at the end where no one wanted to speak. It was a beautiful moment."

Mike Griffiths affirmed, "The musical diversity is a breath of fresh air, and it's good to not have a concrete band because it leaves room for even more variety and evolution, particularly in a live setting. Also the songs are very prayerful and honest." Dave Griffiths' wife, Jess, also contributed to Chaos Curb, adding backing vocals to several tracks. She commented, "For so long the Church has been renowned for asking people to 'come in' and 'join our meetings and good ideas' and enter in our unfriendly buildings and programmes. Chaos Curb wants to encourage the Church to take its place showing love to the community and reaching out to the marginalised and lost. This is our act of worship and is part of the commandments Jesus gave us."

The final word on the groundbreaking project goes to Gareth Hutchinson, best known for his guitar work with [dweeb]. "The thing that excites me about Chaos Curb is that the whole project is geared toward action. Making music is not the main aim, it's just the beginning. We worship to connect with God and what he's doing, as his Spirit transforms us we are then empowered to live lives that in turn can transform those around us. 'Place gifts in our hands, for people around us!'"