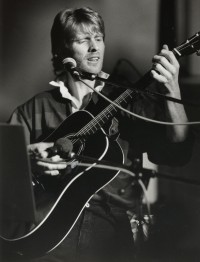 One of the three acoustic singer/songwriters (the other two are Nick Stevens and Graham Stovold) wondering across to the Cross Rhythms Mega Tent this year to slip in songs during band changeovers is Torquay-based songsmith Charlie Allansen. Charlie is no spring chicken ("I admit to being 40") and has crammed in years of rock music experience. He learnt to play electric guitar while in the merchant navy. "I'd play through the auxiliary output of the ship's film projector," he laughingly remembered.

He played in a band, Springheel Jack, who won the area heats of a Melody Maker contest but split up after the final at the Marquee when they were unplaced. "Our egos couldn't stand it," Charlie recalled ruefully. More gigging with a Dylan covers band and a job roadying with the Johnny Mars Blues Band (his brother played with them) were forerunners to Charlie's Christian conversion in 1983. He moved to the West Country with his wife and began working as a carpenter. But he still had deep spiritual lessons to learn. "I was going to a church where many people were successful in business Porsches parked outside the church, etc. I tried to join them and started my own contracting business. It was a disaster and I almost got my family evicted. Then the Lord spoke to me about me being me - jeans and t-shirt Charlie Allansen - rather than chasing some fantasy as a successful tycoon."

In 1992 Charlie began writing Christian songs. Eventually he concluded that he was to sing them. "It was an incredible challenge, I'd always been a guitarist but I'd never sung before. It was even more scary when I began to hear the Lord calling me to go out onto the streets as a singing evangelist." As a busker for Jesus, Charlie was soon making headway and after a subsequent recording debut with his 'New Road' tape things have continued to look up for Charlie with a residency at a Torquay wine bar. He hopes soon to begin schools work with outreach organisation ICE. As he says, "God's opening doors, I'm just going through them."