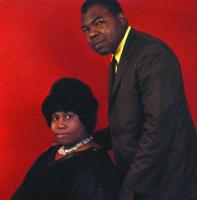 When, a few years back, Christian music buffs were directing their "are they, aren't they?" questioning at Scottish folk pop geeks The Proclaimers one pointer was the inclusion of the song "I Want To Be A Christian" on one of the duo's albums. In fact, the song came not from the songwriting pens of Craig & Charlie, but from a duo who, though never to enjoy gospel music's richer pickings, were tireless gospel troubadours for three decades. The Consolers were a husband and wife duo from Florida - consisting of Brother Sullivan Pugh on guitar and lead vocals and his devout wife Iola singing harmony and sometimes lead. It was in Florida that they met and married.

From their base in Miami, they toured the south eastern states and in 1952/ 3 made their first recordings for local operator Henry Stone, as the Miami Soul Stirrers for Glory and as the Spiritual Consolers on DeLuxe. Late in 1955 they were signed by Ernie Young's Nashboro label and a long and successful relationship began.

The Pugh's very first release on Nashboro, "Give Me My Flowers", was a hit with gospel audiences. The opening line is more familiar in blues than gospel, most notably in a '30s recording by Peetie Wheatstraw, and is very likely proverbial in black culture. Appropriately, it's Sullivan Pugh's bluesy reverb guitar that immediately strikes the ear, instantly recalling the much better known (to white ears) Roebuck 'Pops' Staples.

Over the years The Consolers recorded 10 or more albums for Nashboro of which 'Give Me My Flowers' (1961) and 'Heart Warming Spirituals' (1963) were released in the UK on a twofer by Ace in 1991. Their earthy, spiritually direct songs struck a chord particularly with the rural gospel audience. Wrote Tony Heilbut in his book The Gospel Sound, "Their simple country approach stresses such sturdy virtues as humility (" If I'm Too High, Lord Bring Me Down"); kindliness (" Give Me My Flowers While I'm Still Living"); and mother love (" I'm Waiting For My Child To Come Home", "Every Christian Mother Surely Prayed For Her Child"), and made them among the biggest gospel record sellers after James Cleveland."

Nashboro's gospel operation never paid much attention to the possibilities of crossover; for one thing it was scarcely there in the '50s, but even in later years, when the Staple Singers were playing the Newport Jazz Festival and being boosted by Bob Dylan, the label - and, it would seem, The Consolers - were happy to keep addressing their black audience. However, in 1972 The Consolers performed at the Newport Jazz Festival. They were apparently well received. But afterwards they returned to recording for Nashboro and to touring the less glamourous, but more faithful, churches and auditoriums of the black gospel circuit.

I found soul food through The Consolers music, I really found home and not just home but spiritual home, thank you I'll forever be blessed.

I'm really from Mooresville, NC. But as a young girl, I remember my parents went to a concert where the Consolers were singing, at the Charlott Coliseum. Charlott NC, back in the early 60s. I guest I was around 12 or 14 years old and my father and mother had been singing the Consolers songs, for a while and at the concert. Mrs. Iola call my parents on the stage that night and let them sing one of there favor song, that they love and it was. Give me my flowers and they had a standing ovation. I was so proud of my father and mother that night, I dont know how the Consolers knew about them but it was so alsome for my parents to be call upon and too let them share there space in that concert. Our parents are still with us thank God. Dad will be 90 August 06, 2012 the Lords willing. Mom turn 84 this pass March 05, 2012 and once an while they spark up the songs of the Consolers. I must let them know that they have gone home to there great reward. thanks for letting me share my comments.

May God continue to allow you to spread his word in your Ministry.
Mr. & Mrs. Sullivan and Iola Pugh were my god parents.
I am so honored and blessed to know their beacon still shines across the country touching and reaching the saved and unsaved.Yes,that was like them to allow your parents to come up on stage with them.Because that's who mom and Dad were..down to earth true boen soldiers of God on his battlefield..sincere grattitude..Andre'

Thank you so much for sharing that with us, and please let your parents know that it is good to know that there is someone out there and you as well still remember my aunt & uncle,even though they has passed on,i know they are looking down gracefully smiling with the expression of appreiciation. again thanks for sharing your memories,and may God Bless You All.

I love " the Consolers", their music is surely anointed of God. I would love to know where I can purchase their greatest hits or even a collection of their songs. Each song is assigned to touch the people's heart and minister to them, ushering them into the great presence of the Lord. They were truly used of God to Console His people.

Just discovered The Consolers from listening to old LPs of gospel music. I'm not a religious man but I am blown away by their songs and the power of their voices. Very moving.

Thank God for this great opportunity to share positive memories of two devout Christians while here on earth. Brother & Sister Sullivan & Pugh were/are my late god parents.I toured,stayed with them and spent many years of m life with them until their demise.They were unique in their own god given style of ministry to the gospel to try hard to entice others to come to Christ,and encourage other saints that "Jesus remembers,when everyone else forgets.I can go on & on.I am so blessed and honored to have been asked by my late god dad in 2009 (during declining years of his health) to accept the award for "The Consolers " being inducted into "The Hall of Fame",what an honor,I will always love you and carry on your legacy for the Lord.

Dear Mr Andre Williams. sorry to hear about the passing of your god parents. They attended one of our family reuion the JOHNSON/Williams in the year of 1990
in Miami Fl. one of them are related to my mother Elizabeth Johnson born in cottonton, Ala d/b 1911 to Annie (Rivers) and Joseph Johnson Sr. we are trying to get our ancercy tree together and we need help if you can help us with information. would you and annie Grimes please give me a call 229-263-5829 My name is Irene Williams

I grew up listening to The Consolers when I was very young in the 60's! My favorite song is "He knows that his Child is on board". I grew up in the State of Utah too, so that tells you just how far this duo reached across and touched an entire nation. I'll never forget them.

i remember the pughes from when i was a little girl living in geneva,ny. they use to come and sing at our church there'mt calvary cogic'. they knew my grandfather 'deacon grady.' i lovge them, they were saved&satified. when bro pugh brother moved to geneva, they had there niece priscilla w/them. a few yrs ago, i got in touch w/singer bro pugh, so i could get in touch w/priscilla. he was so sweet, he put us in touch . i want to say i am sorry a great man of GOD has pass on. i just found out about this tonight 10/9/2011. i have to say, he ain't a dead, he is just asleeping, and we shall see him and sis pugh again. GOD BLESS YOU FAMILY

Growing up in Tallahassee, Fl in the 60's, I think every African -American household had a Consolers album and/or 8track! Some of the first songs I remember singing were theirs! My personel favorite is Somewhere Around God's Throne! It takes me back to the summers I spent in Monticello with my Grandparents and going to church with my Daddy!

So sad to hear of their passing! They crossed my mind and I thought I would google them!
I remember them as a child, they use to come to AL and stay with my grandparents when they sang at my church.