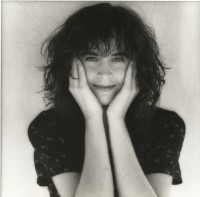 The most difficult thing for any long-term recording artist to avoid must be predictability. Success itself becomes a trap - the pressure is always there to satisfy audience expectations by sticking to a tried and trusted formula. When you are in your early twenties, already have nine albums to your credit, and have eared the position of being one of Europe's foremost Christian artists, that pressure must be intense. Yet, with her long awaited tenth album 'Changing' Charlotte Hoglund has made a radical departure from her previous work. I began by trying to establish how a 24 year-old could have made so many records! Although slightly idiosyncratic, Charlotte's English is always expressive, and her answers betrayed an impressive depth of thought about, and commitment to, her role as a Christian artist.

"I grew up on a farm in the North of Sweden, and when I was very little, when I was six years old, I started to record children's albums for a record company. My dad was writing all the material. He is a travelling evangelist working with the Covenant Church. After I finished my school I went travelling with my dad, together with a piano player, and I sang at the crusades. "Later I brought a band with me and I started playing with them in the crusades. After that I started touring by myself, to travel alone, not with my dad anymore - it was like a natural step to take," she said. One senses that all this is history - the stuff of the well-rehearsed record-company biography; but when she speaks of her latest record, Charlotte is suddenly animated, and totally involved.

"This is the first time I have tried to write on my own, and it's really hard because I had never done that before and when I wrote I felt the pressure," she said. "OK I'm a Christian artist, I had to write Christian lyrics, and that pressure made me feel I couldn't write because I write about feelings, at least in my diary. What came out was not like typical Christian lyrics. "I had to tell myself OK, my security is not in those Christian words, my security is in my belief in God, and that's the important part. I think as Christian artists we always have this pressure on creating in a certain way, and I think that's wrong, because we have freedom in Christ to create." Freedom and creativity, it becomes clear, are things Charlotte placed a high value on. She militates against the idea that every song she writes must try and conveys the whole Christian message or, as she puts it, "contain all the answers".

"I think that's wrong, because I can't tell an artist or a painter just to draw or paint a cross - but he should paint the trees, so that someone sees Christ. Then I think how far can I go, how free am I really when I write lyrics? I feel that I've just begun - it takes a while to really come deep down to the root in ourselves and in our belief, finding a way of writing," she said. If you write in a paper it takes a while till you find your style of writing; I think I'm on my way, just searching and trying to find it. To identify is important in order to communicate - and I think if we Christians dared to show our pain and the hurt inside, more people would want to believe in our God. Many times we show a face of joy and 'praise the Lord', and it's not real," she said.

Charlotte is committed to excellence; not just a standard of excellence that might pass in cosy Christian circles - she wants her work to stand up alongside the best that the secular world has to offer. In many ways these aspirations are fulfilled in her latest album, 'Changing'. The musicianship on the album is superb and the production of a standard that would guarantee that none of the tracks sounded out of place on daytime radio. The settings for the songs are often inventive - ranging from a string quartet and electric sitar on one song, mandolin, accordion and acoustic bass on another through to traditional rock formats. All the time the arrangements serve to highlight the album's strongest point - the presence and power of Charlotte's bittersweet voice. Like any artist working in a language other than their own, one problem she has faced has been translation of the songs, and the English rendering of some of the lyrics leaves something to be desired. However, it's obvious she is well on her way to discovering that 'way of writing' she seeks.

I was particularly impressed by the first track, "My Own Song". In it, Charlotte deals with the difficulties faced both by a Christian artist and a Christian woman in society, in a fresh and honest way. "Sometimes I feel such pressure to be a dream for someone else; but the longing inside of me is stronger! To be true to myself slowly in making my way to the woman I want to be more and more. I understand that deep inside I'm free". Charlotte feels that for the Christian woman with both the Christian and secular world trying to 'put her in a box' it's vital to have a sense of self worth independent of other people's values. Her ambition is "to live out the woman that I am - because the minute we are in church we say 'well, don't dress up too much...' I think its important to look at yourself and say hey, I'm OK, tonight I'm beautiful - we easily mix that up with pride, but there is a true attitude towards yourself that I think it's important to have!"

Her desire to be free to write about any subject, to allow her Christian belief to shine on every area of life, has also led to the inclusion of a love song on the album, 'Fine One' which in its Swedish language version has been picking up airplay on secular radio stations in Sweden.

"For most people a love song is the most natural thing to write, but for me it's not -it was a big step. Some people say 'why do you write a love-song?' But I think we, as Christians, should write even more love songs. "I enjoy listening to true love songs, about how hard it can be - love but first go-to-bed, and sex and blah blah blah - we need more honesty in lyrics from a Christian point of view too - and not only the simple answers, but pain, and things like that."

Like any artist who has made a change of direction and who is still feeling their way towards a musical vocabulary Charlotte is sensitive to people's reactions to her latest work. Some have not been able to cope with the change, but for the most part her Christian public has been enthusiastic - and she is particularly excited about gaining a new non-Christian audience! There have been fine reactions from non-Christian people. An atheist journalist said "If there had been more Jesus on your album, I wouldn't have been able to listen through it all ..."As it was, he did listen through it, found himself enjoying it very much, and he and Charlotte were later able to discuss the album's message. Charlotte is already writing new songs for her next album and dreaming big dreams. She says that it's time that Christian musicians and Christian artists in general take back the ground that they have lost. There are rumours that she may visit the UK to play live - if she brings the musicians she performed with on this album, that will be too good to miss. We'll keep you informed. For Charlotte, things are definitely changing for the better.

My twin brother who lives in Kristianstad gave me your CD - charlotte*take me to your heart'. Do you have any more CDs? You are great.

We are trying to find out where to find any album by Charlotte Hoglund here in the Netherlands (Except on YouTube). Nothing seems to be there! Can any one help us? Is anything available in the UK?

For more on Charlotte visit the Charlotte artist profile