Tony Cummings reports on Jamaica's CHEVELLE FRANKLYN and her new life as a gospel reggae minister. 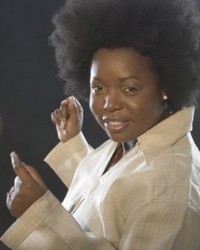 The seismic shift in the career of dancehall reggae star Chevelle Franklyn in 1998 is one of those stories which has now gone into reggae gospel legend. In that year the singer of such bump and grind reggae hits as "Nice And Naughty" and "Dancehall Queen" shocked an audience when she announced that she was tired of her old lifestyle and declared on stage that she had decided to become a Christian. She remembered, "I was about to sing 'Dancehall Queen' and I just said to the people, 'I can't do this,' and I started to bawl. The people were staring at me. I said there's a song that I want to sing, Kirk Franklin's 'Silver and Gold' so I sang that on stage."

Chevelle was born in Tawes Pen, St Catherine, Jamaica in 1974. Even as a child she had a strong sense of the spiritual. Said Chevelle, "When I was seven I heard a voice calling me, over and over. When I got older I realised it was God, but I didn't know at the time. It's only when I got older and read Samuel that I knew it was God calling me."

Chevelle's singing abilities were quickly recognised. Something of a protÃ©gÃ©, she was spotted by reggae producer Rohan Harrison and at the tender age of 14 she recorded her first single, "Here I Am" (though it wasn't released until she was 17). Nurtured by some of the top names among Jamaica's music producers, Chevelle soon marked out a distinctive territory in Jamaica's dancehall scene. She began working with producers Mikey Bennett and Rohan Harrison and recorded a hit "Nice And Naughty", followed by another single, "No Pushover" in 1992.

This led to collaborations with household names such as Spragga Benz for "A1 Lover" in 1996 and Shabba Ranks for "Mr Lover Man" in 1991. In 1997, Chevelle hit a lucrative opportunity to record the international hit "Dancehall Queen" with Beenie Man, for Island Records. The soundtrack was used for the equally successful movie of the same name. By 1997 Chevelle was a household name in the Caribbean, the UK and the USA. During 1996 and 1997, Chevelle toured the major cities of these countries, performing at venues such as New York's Apollo and Jamaica's Reggae Sunfest.

Said Chevelle, "It was while having the hits I got saved. The reason why I say that is because people would say maybe because nothing was happening in my career was the reason why I became a Christian. But that was totally not true. Christ was missing from my life. I got saved whilst I was touring. I was just empty. Something was missing from my life and I didn't know what it was."

After her conversion, Chevelle committed to singing and recording only reggae gospel. A 2000 collaboration with Papa San on his award-winning album 'Victory' led to a Marlin Award for her vocal appearance on the track "Touch From You". She wrote the first page in the history of her new lifestyle with her first gospel album, 'Joy', a co-production effort with Danny Brownie, for Mainstreet Records. The album caused quite a stir in gospel circles when it was released in 2001, and led to a tour around the UK, the Caribbean and the USA. But Chevelle's album was also criticised for bringing the sassy sound of dancehall into the Church.

Responded Chevelle, "The Bible says that we are all fishers of men, and not all fish can be caught with the same hook. You can't blame the Church too much, they can only do so much, and you can't force truth down people's throats. But there is a radicalness that is needed. Christians need to come out of their comfort zone and share the Gospel with others. We need to step out in faith, not in fear. Some of us who are in the body of Christ are not really brave enough. Where there is fear, we need faith. Isaiah 43 verse 19 says, 'See, I am doing a new thing. Now it springs up, do you not perceive it, I am making a way in the desert and streams in the wasteland.' It's about what and who God is using for his will to be accomplished here on earth. The dancehall gospel sprang up and nobody saw it coming, it's not in line with how tradition had planned it, the method had to be different but the message remains the same to reach those who seem unreachable. The real test is, is there any fruit - as God's currency is souls."

2004 saw Chevelle releasing the single "Come" on the singer's own label N.O.W. (which stands for No Other Way). The singer also ministered at numerous events including The International Gathering Of Champions organised by London mega church KICC. In April 2005 N.O.W. released Chevelle's 'His Way' album. Chevelle explained the album's title. "I am at a place in my Christian life now where I do what God wants me to do. I am not concerned about material things. These tracks explain personal experiences I have had in my life and how God helped me work them out. For me it has to be an album with a message that will create change in people's lives. It is really about what he wants me to do and where he wants me to go - his way."

One of the outstanding tracks on the album is the song "Would You Go". Commented Chevelle, "We always say we will do anything for God or go anywhere for God, but when there is no stretch limousine waiting to take us there, we are not sure. The question is will you really go? For example, I was saying, 'Lord, I will go anywhere you want me to go.' But the question was, would I really go?"

Praise God. The account on how you bravely surprised you audience by your decision to sing for Christ would never vanish from my mind. What a great and firm decision. I cannot forget including one of your songs on my daily morning show on 97.3 fm-a Christian gospel radio station. Keep the fire burning.

Chevelle ur God's instrument, I was blessed by ur ministrations durin d King's Assembly Inspire Conference. I love Kill my Flesh- it breaks my spirit & keeps me hungry 4 God

U have blessed me so much WTH your music,ever since I was young.God bless u

Chevelle God has bless you,and am truly happy for you,i remember i use to see you coming from school,a very jovial individual,i wish if you could visit your old school and speak with the kid there.My son graduate from there and now my daughter is attending.May god continue to bless you while you continue to inspire others.

I'm mad with your song( magnify his name)every day i must play this song a lot of time in my bus(im a busdriver)chevelle continue singing for GOD its wonderfull and my sis know that the only one u can trust is GOD who will sacrifice his child for others?nobody.only GOD thatswhy he's great i love u

you've got the call and you've been choosen by the almighty God in this last days. Your music makes me wild for Jesus. love u

i just discovered your video last night i have been blessed by your anointed voice.please continue to lift up Jesus, many souls will be drawn to him God bless!