Chris Norris: A long haul before an album debut 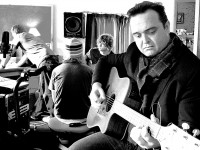 It's not every independent artist who can release his debut album with a concert of 300 people and not every independent artist who can call on the production gifts of studio maestro like Matt Wanstall (The Tribe, Spring Harvest). But then Salford-based Chris Norris is no ordinary guitar strummer tentatively penning his first batch of songs. Chris' album 'Love Songs To The King' has been 10 years in the making and is a minor gem of radio friendly pop and rock. On a recent visit to Cross Rhythms radio, Chris spoke to Mike Rimmer about his life and music.

"I was brought up in a house church, my dad was a pastor of a church so I'm from a churched background and my brother's now a pastor as well. I was the black sheep and went the wrong way." At university Chris turned to the faith of his upbringing after much self-reflection. "One night I just thought to myself, I can't cope with this any more, I can't cope with this life. I was going out with a girl at the time and she wasn't from a Christian background. I just said, 'Look, I've got to do something about this and I want to become a Christian,' and in the halls of residence we got down on our knees and gave our lives to the Lord!" Chris had been seriously keen on music from his youth. "I've been involved with music for quite a long time, even from when I was at university (and I won't say how many years that was). The place I was born is near Liverpool so obviously The Beatles were a big part of my life from a young age. Not that I'm 65 or anything now!" With the creation of 'Love Songs To The King', Chris was aided in its production by some seriously talented friends. Chris explained, "I've got a friend, I don't know if some of the public will know him, his name is Doug Walker. He used to do some stuff with The Tribe, he's had his own band, sung at Prom Praise and has an amazing voice; a great singer/songwriter. He basically said to me, 'Chris, you better get some of your stuff down before it's too late.' He also introduced me to Matt Wanstall and he's just been absolutely amazing. I think he's been a bit surprised by some of the things I have brought into the album - some string quartet, some trumpets and all different types of things, but he's so able. He's a very gifted guy and he's really helped me with the production of it. Also, Jules Randall (one of the backing singers on 'Love Songs To The King) did backing voices for The Gorillaz."

The new album has certainly been getting some positive responses in the North West, with his first ever live performance accompanied with a full band in Salford giving Chris much encouragement. He observed, "When you're an unknown artist it's really hard work to get people along but you know, we've got quite a few connections. We used networks. We sent out mailers, all those types of things and it was just buzzing, I just loved it; it was great!" When one has over 300 people turn up to such an event, who can blame Chris' excitement? Said Chris about his music, "The type of stuff I write is basically acoustic-based and also sort of melody-based. I can go to small churches and do gigs there." Certainly, like many Christian artists, the life experiences that they go though do have a massive impact, and the work that they do gives them a tool for communicating with others the ways in which God works in their lives. "What I always say is never forget that there is somebody up there looking who really loves you and he only wants the best for you. He's not a God who is ever going to be massively judgmental because he loves you and he just wants you back. It's a bit like the story of the prodigal son. The Father is always there ready for you to come back to and I know that is true in my life and actually coming back to him was the most amazing experience. For the album I wanted to create something which had a number of different styles on it, but at the same time reflected my personal journey with Jesus. So that's basically why it's called 'Love Songs To The King'." One of the outstanding cuts on the album is "Father, Father Me." Said the rocker Chris, "It's quite sort of Led Zeppy in the middle, got really heavy stuff but it was basically to reflect what I believed. I wanted something that was going to be quite upbeat towards the end. And it is you know, it's just shouting out, come on shout, come on, sing. It's saying let's be proud of being a Christian."

Hi Chris! Great to hear you've finally recorded some! Any chance we could buy a copy? Where from? How are (other) things with you?