Christon Gray: Things are on the up for the artist straddling hip-hop, R&B and pop

Tony Cummings reports on the multi-talented maker of the "After All" radio hit, CHRISTON GRAY

Christon Gray recently made it to number one on the Cross Rhythms chart with his infectious "After All". It's been an eventful year for the Ohio-based rapper and singer. The hit is from Christon's second full-length album 'School Of Roses' released by Collision Records. The album has caused a considerable stir in Christian circles with its confessional lyrics. Speaking about the project Christon said, "I spoke about real issues in my life and laid a lot of painful truths that had me making sure my wife, family and close friends understood I was about to open a can of worms. Everyone was okay with it as long as the focus was using it to encourage and uplift people that might be going through the same things."

Christon continued, "I think I'll be dealing with temptations and struggles forever; I'd be lying if I said different. What I can tell you is that my family is thriving and we are grateful for the ups and downs the Lord takes us through. To me, family is the most important thing that God gives us and we have a responsibility to serve and protect them. That's what I'm about. As for the song with B.Reith, he sent that over with the chorus already in it, so it was simple to craft the story around the topic. 'School Of Roses' was a theme album, so it would have been tough to put a song like 'Light On' in the mix, but believe me, I'm grateful for the timing."

Gray was born Christon Michael Gray on July 18, 1986, in Columbus, Ohio. He was very much rooted in the church, his mother being a gifted gospel singer. He admitted, "She just wanted to stay away from the music industry totally. Her voice is amazing. She toured a little bit in Europe with the group The Gold Gospel Singers. They sang for Queens and Castles. They took tour buses everywhere and it was amazing. Between that and her being the lead singer of our church of about 2000 members and my father was the choir director for about 25 years. With all those components and him having his own gospel ensemble, about 17 voices who travelled the nation and did shows, I kind of grew up around it. I was very faithful to our church. It was a very personal relationship with an understanding of the Christian message. It's all I've known. Even when I started getting older and started experiencing life on my own, it's still the only thing I've known to be true. It's not just me regurgitating something that I was brought up under. It's real life for me."

His brother, Taelor Gray, is also a rapper and both were part of The Elevationists. In 2007 that group released the album 'The Necessary'. Remembered Christon, "I was the singer/ rapper/ producer/ musician of the group and my brother was the Wyclef. Then we also had a band. We had a very refreshing sound for the time. We started in 1999, so you had DMX, Puffy and Mase, Master P and then you had us. We definitely weren't on that platform, but listeners who came across us were missing that musicality, lyricism and that realness. We brought it to them with a message that actually didn't just relate with them, but it challenged them spiritually. It was a fun ride. Then one day, we were approached by several different people to expand that sound to a mainstream audience, but it was at the expense of us changing our beliefs. We didn't want to do it and everything shut down. I was left by myself and that's how I made the first project ('Even With Evil With Me'). It definitely wasn't the typical boy band breakup story, but I think they just ran out of steam because we ran out of options. I chose to keep pushing forward because I can't help it." 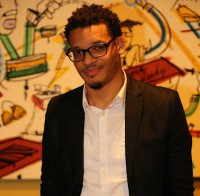 In 2011 Christon joined hip-hop collective W.L.A.K. who in 2013 released a self-titled album. In 2014, Gray released his first studio album with Collision Records, 'School Of Roses' which featured fan favourites "Vanish (ftg Swoope)", "Wanna (ftg JGivens)" and his radio hit. "Vanish" was the first single from the project. Gray told YouKnowIGotSoul, "The album breaks into different genres. I mean it's an R&B album, so we wanted that soul R&B sound, but we wanted to touch some different demographics. With 'Vanish', it was intentionally electronic, old and kind of early '90s hip-hop type vibe. We figured those two sounds had not been capitalized together so we just sat out and went through some samples of old Beatles type stuff. We listened to some James Blake, he's a British artist who just has this electronic vibe. We listened to Coldplay. We were like, 'We can't do it like that for this album because it won't fit, but how can we create a sound that will captivate people immediately and get that night time vibe?' We just started creating and within 20 minutes, we had 'Vanish'. Actually it was the only song I wrote while it was being produced, so it was pretty cool because it just kind of happened."

Christon has some very strong views about the classification of music into groups and sub-groups. "Christian hip-hop is a subgenre of the hip-hop culture. It reaches a lot of people, but it can really reach your limit to the wide range hip-hop audience. The gospel genre is the same thing. It's called gospel, so if you approach it from a musical or even a lyrical standpoint, it kind of limits you to your audience. I didn't want to compromise my beliefs, but I do think musically, the music doesn't sound like contemporary Christian music, gospel music or even Christian hip-hop. It has much more of a mainstream sound in my opinion. I just wanted to put it in its proper place. That musicality, sonically and lyrically, it puts it into an R&B category. I think that's where the project belongs."

In April, after confirming he was leaving Collison Records, Christon released an EP, 'The Demos' and in June this most eclectic of R&B hip-hop talents signed with Kirk Franklin's Fo Yo Soul. Clearly the association with the biggest name in gospel music can only take this R&B and hip-hop eclectic to the next level. In the meantime, his still-growing fan-base will be enjoying songs like "After All" and "Wanna".