The latest invaders from Detroit, to reach these shores, COMMISSIONED have proved that they are ready and waiting to contend for that number one spot. James Attlee spoke to the group. 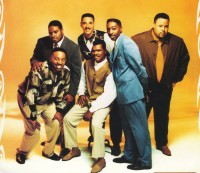 With the news last year that both Keith Staten and Michael Brooks were leaving Commissioned, the rumour was that the group's days were numbered. Happily for the loyal following they have built up in Britain over the years, that is just what it was - a rumour. The group that took Birmingham and London audiences by storm on their recent visit looked far from being a spent force - in fact they must be one of the tightest, most dynamic, joyful and downright danceable live experiences in the world of black gospel today. The boys are back in town and they're sounding better than ever. I caught up with man-mountain and founder member Fred Hammond and co-founder Mitchell Jones backstage at Birmingham Town Hall. For the men from Commissioned coming to Birmingham is like a homecoming - Britain's second city has perhaps the most loyal and noisily welcoming black gospel audience in the country and Commissioned knew they were guaranteed a rapturous reception. For a while it looked like pinning anyone down for an interview before the show would be impossible - the band were anxious to take in the sights and were indulging in the traditional pursuit beloved by visiting American musicians since time immemorial of waving handfuls of dollar bills at their promoter hours after the banks have closed, in their eagerness to be able to pay for Big Macs in the currency of the land in which they found themselves.

I found Mitchell around a piano backstage with new musical director Clarence Frank, working on a song. Loath as I was to interrupt the creative process my instincts told me that this was a now or never situation and Mitchell gracefully accepted my invitation to sit on a back staircase and talk to my tape machine for a few minutes. Fred was collared later in a corridor outside a dressing room rapidly filling with well-wishers. We began by talking about England and the following the band have built up over the decade of their career.

"We love it every time", Mitchell says of the group's visits to Britain. "The people here, they really seem to like to worship God. They believe in making a joyful noise to the Lord and we like that, because when we are in a place where people like to praise the Lord, it ignites - it gives us strength and courage to go on and encourage somebody else." Fred put it more succinctly later on in front of the capacity audience at the Town Hall, on their feet from the moment the band hit the stage. "On the Commissioned map, Birmingham holds the title for the hottest and the rowdiest - GIVE IT SOME!" They did, believe me. Mitchell Jones ("the youngest-looking in the group - no, I'm kiddin' you!") took me back to the group's origins over a decade ago.

"Myself and Fred Hammond and all the rest of the guys were all singing in different groups. Fred and myself were in a group called Saved, Keith Staten and Karl Reid were in a group called the Sounds of Joy and Michael Williams and Michael Brookes were in a group called Blessed. We were all in the city and knew each other. Fred was playing bass and doing a bit of singing with the Winans at one time and the Lord allowed Fred to tie it all together." "Mitchell and I went to school together and Michael Williams, I grew up with him" elaborates Fred in his inimitable growl. "There were at least six other guys who could have been in Commissioned. The Lord just led me to the brothers who would be receptive to it." "There's a lot of talent in Detroit" explains Mitchell, for those who haven't caught on to the fact. "You have Derek Brinkley, The Winans, The Clark Sisters, Ranee Allen, Thomas Whitfield, Vanessa Bell Armstrong, BeBe And CeCe, you have a lot of new artists... We all really lived around each other. The Winans and my family went to the same Elementary, Junior High and High Schools and the Clark sisters too. We all grew up in the same area and developed that sound being around each other. I might sing with Daniel Winans, or Marvin Winans might sing with my brother - I guess you might say it's just the Detroit sound." There seems to be remarkably little rivalry between these different artists - and no resentment that it has been The Winans and BeBe and CeCe Winans (and to a lesser extent The Clark Sisters in the early '80s) who have enjoyed most of the crossover success so far.

"The Winans' success opens doors for all gospel music" believes Mitchell. "Whenever you hear gospel being played on secular stations it definitely opens doors. Even MC Hammer with his song 'Pray'; I don't know if he knows it or not but that opens the door for a lot of gospel music, people who never listened to gospel before are starting to accept it."

"I was raised in gospel music, but I never knew there would be a career available in it" Fred explains. "The only one then that was doing this was Andrae Crouch and he was such a big figure that we felt that it was out of our range. In our generation suddenly the stars were going up like boom boom boom - now it's much more available thanks to the Winans and the Clark Sisters, who showed us you could get out there and make a living at it as well as be effective."

The group's career so far has spanned 11 years and their touring schedule sees them on the road 40 weekends a year. They have recorded six albums, five with Light Records and one with their new label Benson. They see their signing to Benson as an opportunity to further cross over to a white audience - they have already recorded a live album with top CCM star Carman and hope to be touring with him in the future in a boundary-busting package that would expose both black and white gospel audiences to a new music experience.

Anyone seeing the group for the first time are going to be astonished at the power they pack live. At Birmingham their super-tight backing group came on stage first and laid down a groove that had the audience on its feet instantly. Fred Hammond, Mitchell Jones, Karl Reid and new lead singer Marvin Sapp then appeared from beneath the stage on a riser, making the most dramatic and, let's be honest, the most showbiz entrance I've seen at a gospel concert. But the group's sense of humour and evident sincerity undercut the trappings of stardom. In Marvin Sapp the group have found an excellent foil for the frontline threesome of Mitchell, Fred and Karl. Sapp is a dynamic performer, totally in command when taking the lead vocal spot and continually livening up the group's stage act with visual jokes and fragments of choreography. The smile never seems to leave his face. At the same time he is a powerful and moving singer and when the sound is stripped down to just the unadorned voices of the group we are reminded of the tradition of gospel quartet singing from which this Detroit outfit ultimately spring.

"OK, we're going to have fun but we're going to praise the Lord" booms Fred in one of his between-numbers raps. "None of this means anything if God doesn't get the glory." As the group sing the title track from their 1989 album 'Ordinary People Just Won't Do' acapella, the audience sings along in hushed voices. The lyrics are a prayer for a supernatural touch from Cod, and someone at the front begins to call out "Hallelujah, hallelujah" and sob hoarsely. The group continue to sing, eyes closed for the most part, and someone at the back, also evidently "in the Spirit," lets out a scream. At the end of the song the group exchange smiles before launching into the super-heavy funk of the next number. This is a group that can switch from "havin' church" to party-mode celebration at the push of a drum-machine button. Perhaps that's part of what Fred Hammond means by "being effective."

However contemporary the musical style though, Commissioned lyrics are always "strong gospel" as Fred puts it. Which is not to say that Fred Hammond would be averse to Commissioned having a share in crossover success...

"Oh yeah, I would like one song to really hit big on the secular market. But one thing about it is, Commissioned have developed a crossover appeal without crossing over. More people know about us, more stars say they listen to Commissioned... but we haven't changed, our lyrics are dominantly strong gospel. My theory is - be the best gospel singer. If the world wants you they'll call you. When they want a mechanic they call the best mechanic, when they want an engineer they call the best engineer. You can never please the world by going in there as a pseudo-gospel singer, half way in the middle of the road, they don't like that. Then the church don't like you and the world don't like you and you're a man without a God or a country! No, let the world recognise you. When they want you, they'll call you. Be the best gospel singer you can be and live the best life you can live and the Lord says your gift will make room for you."

I'm a big of commissioned . I would like to know the lyrics to perilous times. Please.