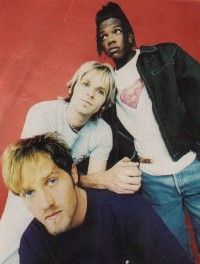 If you judge a band by the company they keep, we'd better get worried J about dc Talk! Lately they've been having some close fellowship with aged devilish rockers Kiss and this generation's shock rockers Marilyn Manson. But don't worry! Before we start any more questionable rumours about them, I have got to say that this fellowship took place on the Billboard Top 200 sales chart where 'Supernatural', the latest in a line of classic albums from the American threesome, recently debuted at an incredible number four! This out performs their previous album 'Jesus Freak' which peaked at a respectable number 16 in 1995.

Since the band have signed a dual deal with both Forefront and Virgin they have extra marketing muscle punching the album into the public's conscience. The album was greeted with great enthusiasm by Virgin whose senior Vice President of marketing stated, "We think there are a good three or four tracks that are potential singles. The production is incredible; it's just a testament to the fact that these guys are very talented musicians and songwriters." Praise indeed for a band who have undoubtedly become America's hottest Christian music act.

The publicity overdrive surrounding the release of 'Supernatural' in September became more frenetic as the day approached with avid dc Talk fans accessing sneak previews via the internet, various American radio specials and even a 'Supernatural' screen saver which ticked down the time to the day of the release of the album and then exploded with a rather marvellous surprise for the fans.

In the midst of all the excitement, the band's Kevin Max is holed up in EMI's Nashville office being plied with huge amounts of coffee as he fields phone interviews to chat about the new album. But first a bit of a dilemma for a radio presenter because Kevin Smith recently changed his name to Kevin Max and he's even been referred to as K Max! So how does he want to be addressed?

"Prince," he says without missing a beat. "I figure that since he dropped that, if it's out there then somebody can just grab it and why not? I've always wanted to be royalty and have a large room in Buckingham Palace!" He laughs and explains, "The main reason is there are so many Kevin Smiths even in Nashville. I go into a service merchandise and try and open an account and they pull up some guy who's had his camper repo'd and I have to explain that's not me. There's actually one guy in Nashville who is Kevin Smith too and he has one digit off my social security number so it's a bit difficult."

Now we have the name thing sorted, it's down to talking about the new album. Band member Toby McKeehan said recently, "We're very open about our Christian faith but when we make our records we want to create a musical experience that anyone can immerse themselves in. One of our goals is to encourage listeners to question themselves and to seek out truth."

Even with this stated goal, there was a great deal of apprehension amongst fans that with the Virgin deal the band were going to sell out lyrically because they'd be doing more in mainstream music rather than Christian music. They shouldn't have worried - listening to the album it seems that lyrically dc Talk are more intense than ever. Kevin is uncompromising; "I just think that people are worried over no reason. People that were worried about dc Talk doing something different than what we've done are worrywarts, that's all, you know? They should probably get a job. I feel we always progress and we always evolve, and we're always going to evolve with time. But I feel my faith is something that will never change because it's timeless. So, in a way I might go about in a different way than somebody else might but I'm not throwing it out the door." He laughs, "I've not made a pact with the Devil, despite the rumours."

Anyone who has observed the trio's development over their six album career will notice that the band's musical maturity has been matched by a growth spiritually. I wondered whether Kevin could compare dc Talk's evolution and match to his own development as a Christian? Does he see the two things working very closely together? "Yeah, very much so," he responds. "We've been together for almost 11 years now. We've learned how to work together very well and different problems come up and we deal with them as a unit. It is a lot like the body of believers. We all have different talents or gifts, different ways of doing things that should be working together and dc Talk does that as much as we possibly can."

The analogy with the body of Christ sparks off a line of enquiry about the bigger picture. Does Kevin have a sense of fitting in with something bigger that God is doing? Is dc Talk's music a part of a larger thing that's happening? "Definitely," Kevin declares emphatically. "God's much bigger than I am and He's got plans that I don't understand and I don't even know about. So being a part of God and His design means I'm caught up in a machine and hopefully we are a part of what He wants to do on this earth. I think we'll be moving with the times, moving with the trends and we'll be trying to put our faith into our culture and doing what we do best. We're entertainers, but hopefully we'll be able to entertain them and also make them think. I'm hoping that that is a movement."

So is that Kevin's contribution into what he thinks God is doing? He is thoughtful for a second and then replies, "Yeah, I'm hoping that I'm contributing to what He's got. Living in God's will you become His will. If you believe in His principles and you're true to who you are you become His will."

The growth of dc Talk to the top of the Christian music tree and now on to a time when they have the opportunity of impacting mainstream culture through Virgin's distribution of the album leaves the band in uncharted waters and an inspiration to other bands who would like to cross over into the mainstream without compromising their integrity. It leaves the band as not only role models for fans of their music but also for other musicians who admire their achievements.

How does Kevin feel about being perceived as a role model? Is it a pressure? He's honest in his response, "it's probably the hardest thing for me as a pop star to be looked upon as a role model. I realise that I am and I can't shirk that responsibility. I try to live my life as I would want people to live their lives. I'm a human being, I have problems. I get selfish, I get insecure, I get angry, I get sad. So to look at me as a perfect human being you'd be having some problems. But I try to exemplify what Christ was all about as much as I possibly can. I think that's the way. There's no other person in history that is worth being a role model or looking to as Jesus Christ. In that way we're Jesus freaks. I don't look at anybody and think they're as special as what Jesus was all about."

I tell Kevin that I've talked to other musicians and as well as being looked up to as a role model by the general public who are buying their albums, there are other musicians who have been very encouraged and influenced by their relationships with dc Talk and have seen how the band organise and conduct themselves. It is interesting that Kevin is not aware of having such an influence with other musicians. He says, "I meet a lot of musicians and hang out with a lot of musicians but I travel so much doing what we do with dc Talk, sometimes it's difficult to get any time with your peers. So that's cool that they've seen something that they like and try to adapt it to what they do. Hopefully I can learn some things from them. I love to meet up with other musicians and find out what they're doing. It's usually more on a creative level than a living level because I'm always travelling and when I'm not I'm in a room with dc Talk, or hanging out with my wife, or I'm with my core group of friends."

The influence of dc Talk has even spread to this side of the Atlantic. I spend some time telling Kevin about British sanctified dance and DNA Algorithm's cover version of the old dc Talk song "Nu Thang". Kevin is enthusiastic about hearing the song and says, "I'd love to have a copy of that. I'm really interested in the music that's happening in England right now. I've been interested in drum and bass for the last year or so, and speed garage and all that. It's interesting. I'm more of a rock and roller. I grew up with the Beatles and Queen and U2; so I lean more towards rock and roll than I do dance music. But we've always used electronica in some way in what we do, not so much on the record as we did on' Free At Last.' I'm open to it and I'm open to putting it into some of our music. But I think our true art form is more a pop rock situation."