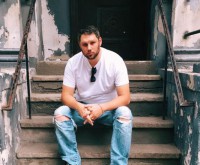 Anyone who has witnessed the progressive rock-tinged music of Chaos Curb Collaboration either at Christian festivals or small clubs (including the first UK tour of the Martin Smith-fronted Army Of Bones) will know that CCC's frontman Dave Griffiths is a powerfully passionate singer and songwriter. Dave's history goes back to the co-founding of grassroots rock pioneers Bosh and down the years Griffiths has doggedly written, recorded and performed much passionate and moving music. With his latest solo release however, the singer/songwriter has moved into a surprising new direction. He spoke about his new EP 'The Brutal Years'.

"One of the hardest things to do is to be yourself. At least for me. For the last few years I have planned a 'side-project' that would be heavier and far more visceral sounding. For 20+ years I have loved listening to bands like Sonic Youth and Blur, where the guitars painted vivid pictures with their surging, squalling feedback and fuzzed-out tone. I have always carried that influence into the bands I've been in (Bosh, Chaos Curb) and my solo records, but never given myself fully to it.

"Over the last three years I've faced some difficult times. I struggled with gnawing doubt in my faith, walked through depression, had issues in my home-life and at times, wanted to walk away from it all. Part of the reason for wanting to hide behind another name was how vulnerable these songs are. These lyrics are a cry from a desperate place. And so this EP is the most raw music I've ever made."

Recorded over two days at The Basement Studio in Wimborne, Dorset, producer Dave called on his brother Mike to play drums on the sessions for 'The Brutal Years' and the project was mixed and mastered by Sean Hatton. The artist/producer's final comment was, "I feel it's right to be honest and stick my neck out and say 'this is me'. It may not be everyone's cup of tea - but it's true to my musical inspiration and my heart."