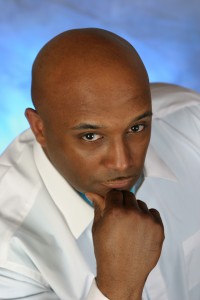 Ohio-based independent artist David Dowlen brought something new to the praise and worship arena with his 2005 album 'Giving All My Praise'. With a strong R&B undercurrent the album, produced by Eric B Jackson at the Praze Faktory in Cleveland, Ohio, is a gem with one track, "I Need You", making it to the Cross Rhythms playlist. I tracked David down and pitched him a few questions.

Tony: Can you tell me about yourself?

David: I was born July 20th, 1965 in Columbus, Ohio, one of nine children - seven sisters and two boys. I remember growing up loving to sing and dance and perform even in front of family. I played around with the guitar a little ever since I was seven or eight years old. It was about this time that I realised that I was blessed with the gift of song. Most of my family members can carry a tune but me and my sister Janice were the two standouts (so to speak). My sister Janice actually recorded a hit in the '80s with Frederick called "Gentle Calling Your Name". She has since gone to be with the Lord in 1991. I accepted Christ in the fall of 1988. I remember always wanting to sing in the choir but never being able to because of my profession. I am currently a policeman in the city I live in and have been for 18 years. I would always say if my work shift allowed me I would join. Well, in the spring of 1999 I was given the opportunity. I joined the choir and then was asked to join the six-member praise and worship team. It was during this time, I believe, that God was preparing me for being in front of others while ministering through song. In the winter of 2004 a member of my church asked me if I wanted to make a CD. I didn't know what he meant. He explained to me the process and how easy it was with the right PC software. I was still reluctant but after a month of thinking it over, finally agreed. His name is Eric Jackson. He would create the music and melodies and I would do all the writing. It turned out to be a great collaboration. I sang all the lead and backgrounds except one part on the song "Shout Praises".

Tony: What particularly sticks out in your mind about the 'Giving All My Praise' recording sessions?

David: What sticks out in my mind is that I couldn't believe how easy it was to make a quality recording. There were other obstacles that were actually funny. While recording, we had no use of a sound proof room so we would have to turn the heat off so the blower wouldn't kick on. What made this interesting was that his wife was upstairs freezing, wrapped up in a blanket. I also remember the laughs and just how fun it was as well as exhausting. The whole project from start to finish took exactly four months. I also remember not having a spit screen so we used one of his wife's nylons and a hanger. Maybe I shouldn't be telling you this (laughing).

Tony: "I Need You" is currently getting airplay on Cross Rhythms. Tell me a bit about that song.

David: "I Need You" was my own personal cry out to God about my own struggles with sin and how my desire was like the Apostle Paul. My desire was to do what was right all the time and I would still fall on my face and have to repent. So the song is basically me saying, "Show me Lord why sin seems to control me/Give me your strength from up above." Thank God we serve a merciful God who is faithful and just to forgive us.

Tony: Christian music seems to be obsessed with labels. What would you call your music? Gospel, R&B gospel, praise and worship or something else?

David: I like the label of rhythm and praise because if you listen to my music -that's what it is. It almost sounds like secular radio in that it grabs you with the beat and groove and then the message hits you right in the face. I feel we have to sometimes target those who would not really want to listen to "church" music. Not that I'm putting down traditional gospel because I love that genre also. There is a whole lost generation of souls out there and we need to reach them by any means necessary and plant the seed so God can cause it to flourish. I remember all the heat Kirk Franklin got when he hit the music scene.

David: Right now my manager is still working a couple of angles and still trying to get the CD heard. I appreciate Cross Rhythms and what you do to help us get our stuff heard. You all are a blessing. Right now though I have a few small things on the horizon that I believe God is opening up - as well as doing more writing. I have been working on some new material. I am hoping this year to get an invite overseas somewhere to show you all some love. I get so much love from my European brothers. Thanks.