David Gate: Releasing an album without a millstone around his neck 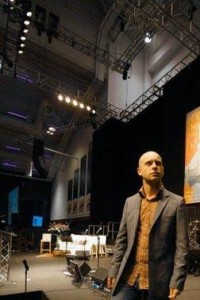 A lot has changed for worship leader and songwriter for David Gate since Cross Rhythms last spoke to him in 2006. Back then he was leading worship at a church in Belfast and had recently had his album 'Unapproachable Light' released by Kingsway. Now David is one of the worship leaders at Trinity Church in Cheltenham and his powerful new album 'Nothing To Fear' is released independently. David spoke about his move away from Kingsway. "I loved working with them but I had this sense maybe 18 months ago that the Lord was moving me on and I started to question the way worship was put out and everything that was around it and surrounded it. The guys at Survivor and Kingsway are some of the most God loving people and I loved working with them but I just felt that what God was doing at Trinity was where he wanted me to be and what he wanted me to do. Fortunately the church have the resources to get behind the songwriters and had the resources to do the record."

For anybody making music professionally it can easily become a treadmill, no matter what type of music you're making. There's a cycle of record and then promote the album and then write more songs ready to record the next album. Gate observed, "I think that's a very natural thing in the promotion of music and the making of music but I think it does become more complicated when you talk about worship and the Church. These songs are resources for the Church and they are being birthed in the Church and maybe out of the will of the Holy Spirit and it's just a lot more complicated. I felt I needed to be really careful and I needed to steward the songs and everything the Lord gave me. I needed to look after the songs and my church and their model was the best way of doing that. The songs are published by Trinity Publishing, our own little publishing company but they're still administered by Kingsway. It just means we distribute them ourselves. It just means that they don't end up on dubious compilation albums with dubious titles and it may end up being in a few places where perhaps I wouldn't want them to be."

There seems to be a growing questioning of the method of some record labels in the way that they package and re-package worship songs for the Christian consumer. The record labels appear to sell the same song a number of different ways but surely they would argue that they're just trying to give David Gate's songs more exposure and get people singing them in church. Surely there's nothing wrong with that is there? Gate responded, "I can see that argument and certainly it was good for me to do that in some ways. But one of my songs was then on an album called something like 'The Best Worship Songs Ever' and I was wondering who decides these songs? Has God revealed that, are they his favourites? And then are we judging them by which songs are top of the CCLI charts? And is that the value of a song? How many churches it's sung in or how many conferences it's sung at or how many albums it's on? It gets really complicated and I just felt like I wanted to keep a closer eye on my songs and what they were doing."

It sounds like Gate became uncomfortable with the process. "A litte yeah," he admitted. "It was really difficult for me because relationally, I love working with them and they continue to do great things and they've really stewarded great songs so well so I was caught in two minds. I had been uncomfortable for a while, but really the Lord started to impress on my heart that I needed to take a risk and do it myself. Financially I haven't had as much money to spend on the album and I won't receive much money back so it's been a cost to us but I feel like it's the best way forward for the church to own it."

The trend today with worship leaders seems to be that a lot of songwriters are trying to write worldwide hits. They're hoping that each album has got a big song on it that will get in the CCLI charts but there is a danger that such thinking leads to diluted songs that don't really say anything. Rather than reflecting what God might be doing in a local community, there's a desire to write songs that can be sung on any continent and this can lead to a dumbing down. Gate pondered for a second and then responded, "Certainly everyone seems to be trying to paint these songs with broad brush strokes. I've got this theory that you can walk in to a church in Thailand or Canada or Scandanavia or Stoke and you can hear the same songs sung in the same way. One part of me thinks that can be good for some reasons but ultimately I think that it makes me a bit sad that we are doing the same thing everywhere."

Is it possible that church worship has become too much like a McDonalds where you get the same food wherever you go and it looks the same, tastes the same and the vibe feels the same when you go inside? Gate agreed, "It's franchised almost and Mc-worship is the term I've used on more than one occasion before. I think the way the songs have been put out and the way the writers are encouraged and all the palaver that goes around all of that, it does encourage that result. My real desire is for songwriters to write from where they are, to express what's going on in their church and their situation and that obedience will be honoured. There will always be songs that will get picked up and be transferred and will get through culture and language and so forth but I don't think that's what we should sit down to write. I think ultimately when I sit down to write I'm thinking about the thousand people in our church and how they can worship and meet the Lord and that's what's in my mind."

In reality, every church is going through its own individual journey at any given time and certain things are being taught. Worship is a part of that journey in that there ought to be songs that come out of that specific journey. "Absolutely," said Gate, "and we've found in our church in the last two or three years that the songs that we are writing often are key songs in the life of the church and they do two things. They either reflect something God's done or something God is going to do and they plug into that and they feed that and the church have a real ownership in the worship and they feel like they're singing their songs. If it comes from my heart and my lips it feels like it's coming from their heart and their lips whereas if you're just picking songs off the latest compilation CD it often doesn't have that same resonance."

But isn't there a problem that not every church has a gifted songwriter and worship leader like David Gate in their congregation? "No and that's why worship albums are still worth making and worth having in some places where churches can go and find songs. But whether that resembles music industry that's another matter and I would say not. I think God's used that over the last 20 years perhaps and so many things have come out of that but with anything we set up, it can eventually become a millstone around your neck. I feel like parts of that Christian music industry model for handling worship songs have become that to some degree."

For the moment David Gate has the 'Nothing To Fear' album out independently full of songs written for his church in Cheltenham and enjoyed at this year's New Wine conference where he led worship. "As a church, we're heavily involved in the New Wine conference. Our church helps to run the central and south west conference which meets in the summer in Shepton Mallet and we lead worship in the summer and a lot of people hear our songs. The songs do get picked up and to be honest I'm happy with it being like that where somebody is interested in what I'm doing and picks it up. But I have no desire to go out and hawk my songs."

And finally after years of trying, Gate confessed he's happy to have an album out without his face on the cover. He's always felt uncomfortable about that. "With all the other albums I've tried it and failed but now I'm finally doing it all myself, I've managed it."

Excellent article raising relevant issues like the macdonaldisation of worship music. I think the companies that produce worship CD's with a string of tasteless superlatives like 'best worship album ever volume 4' should be ashamed of themselves.