DELIRIOUS? face questions dreamed up by their devoted fans.

If there was one thing that you could change, what would it be and why? (Dave Bland, Leeds)
Martin: "Possibly our choice of singles." (Asked to elaborate, Martin enigmatically stays silent. The band go silent, struggling to think of anything else.)
Stu G: "With the kind of set up we have, we're living on a roller coaster all of the time. We are what we are now because of what has gone on, and you don't know who you'd be if you'd change something." Jon: "That's deep! We'd make sure our mailouts would go on time, that'd help!"

What have you learnt about God this year? (Linda Sharp, Derbyshire)
Martin: "I think that he's more in control than I ever imagined."
Stew: "I think that God has been talking a lot to us about communicating. How do you actually communicate what you believe in terms of the gospel and who God is, not only with church kids who understand the lingo, but with people outside of that because that's what we're believing our message can do. It can touch people who don't even understand about Jesus. We've had some great times with people in the mainstream that don't know anything about God and don't know anything about us as a Christian band but they come away, somehow being affected by who we are and just the way we are with people. I've found that really encouraging when you get in those arenas of being in a non-Christian world. God really shines through and it's not forced, it's just you being who you are and we're determined to carry on doing that!"

Have you recorded a video for "It's OK"? Did Neil Morrissey direct it as he threatened to? (Adam Kirkman, Epsom)
Stu G: "We haven't done a promo for the single just yet. As for Neil, it's as likely as any other option at the moment. We're weighing everything up."

Why the name Delirious?? I know it rhymed with Furious? and Curious?, but why start out with those names in the first place? (Juliet from Exeter Uni)
Stew: "Tim's got a good story about Furious?."
Tim: (mutters) "Yeah, but not a repeatable one."
(The band laugh and there is debate about answering the question before Martin grabs the mike.)
Martin: "Furious came..."
Stew: "Martin IS in a feisty mood today. He'll say anything, just give him the mike!"
Martin: "We wouldn't sign with a Christian label in England and there were certain people within the Christian industry who were a bit naffed off that we wouldn't sign and give them the stuff. So it made them a little furious which is why we called it Furious Records. Curious came because there were lots of people on the phones wanting to know where the songs were coming from. They'd see them in church but never heard of the band name or whatever. So they'd phone and say, 'There's something going on here and I'm really curious.'"
(The band break out into spontaneous applause as Martin completes his answer!)
Stew: "He's on form."
Martin: "Delirious was a drug related term that we adopted for our use."
(Everyone laughs.)

Stu G
Can Stu G explain his statement (in Rock Sound Magazine, May '98) that "the band is more a business than a ministry"? (Adam Kirkman, Epsom)
Stew: "Oohh Stu, it had to come up sometime!"
Stu G: "It came out of a conversation with a journalist and it felt like he was trying to trip me up on questions, talking about religion and ministry. I kept saying things like 'can we talk about the business rather than the ministry or the music' because it was going in a music magazine. In the end he just must have gone through his tape and picked up on a few things and made that sentence what it is! I was trying to draw attention away from the ministry/religion type of questions because it felt like he was looking for something to really take the mickey out of." Stew: "When you do an interview for a mainstream publication, it's no good talking about stuff that people don't understand. Ministry to people on the streets doesn't really mean very much. It's an odd word so you have to talk about what you do in ways that they understand. We get a lot of criticism in these things and people say that we don't say Jesus enough in interviews, but all we can do is be ourselves and we know we're still running for the same things. It may look different but people have to trust us a little bit. We've seen some amazing things happen when we've gone out there and been who we are and allowed God to do his bit!" 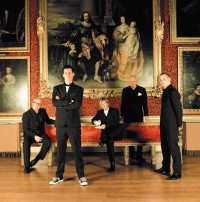 What's up with the skirt at CreationFest this summer at the Gorge in Washington State? (Rachel Somes, Washington, USA.)
Stu G: "Personality crisis."
(There is some discussion about what skirt could be intended by the questioner until they conclude it is Stu's kilt.)
Stu G: "In Great Britain it's a man's wear. It's Celtic!"

Would you at any point now consider shaving off your facial fluff? (Al Rollo, Coulsdon)
Stu G: "Yes. I've done it already. I did it over the summer but it's coming back now!"

Will Stu be singing the recorded version of "Pursuit Of Happiness"? (John Bury)
Stu G: "Yeah, I've already recorded it."

How do you feel about fake ginger goatees? (Adam Kirkman, Epsom)
Stu G: "They cause me to giggle."
Martin: "That's definitely an English question!"
Stu G: "I like it!"

Are we ever going to see Stu G's "Have You Heard" appearing on CD? (Al Rollo, Coulsdon)
Stu G: "Probably not. I think I've got about 10 cassette copies left in my garage. If anyone wants one, contact me directly! And pay me vast amounts of cash!"

TIM
If there was a film made about the journey so far who would best play your part? (John Bury, Hemsworth,
West Yorkshire)
Tim: "Christopher Biggins."

How much work do you do on the business side of things now? (Adam Kirkman, Epsom)
Tim: "Quite a bit. If I feel it's time I have a pay rise, I get very involved."

How's the diet going? (Richard Freeman, Newcastle-upon-Tyne)
Tim: "It's reached a bit of a plateau now but I'm trying not to put it all back on again. But thanks for asking!"