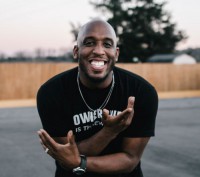 Derek Minor is one of the most successful and prolific rappers and producers in the world of Christian hip-hop. His company Reflection Music Group (RMG) has released a wide range of singles and albums and Derek's current crop of Cross Rhythms radio hits include the songs "Party People", "Fly", "Bigger Better Things" and "Stranger". Here's what Derek said to Cross Rhythms over a rather crackly telephone line.

Tony: How much of your time are you writing rhymes and spitting them in front of a mic and touring?

Tony: What about production? I recently heard a really great track that you produced for a guy called Gentile. So you've still got time to do some production stuff on the other side of the desk.

Derek: Yes, absolutely. To be honest I consider my writing music - usually I write it and produce it - that's the 80%.

Tony: What about in an office, taking care of business? You have to do a certain amount of that. Does that take up the other 20% or so?

Derek: We've got business so automated that it takes up a really small portion of my time. It doesn't take long at all. So I'm blessed to be able to do mostly music and they get to do all the other stuff. I call that all the nerd stuff. I'm all about having fun and a good sense of humour.

Tony: Now what about the screen writing and the acting? Do you manage to get a bit of that in as well?

Derek: Yes, I have a couple of projects that I'm working on right now. But those are more hobbies than they are business. You've got to have great hobbies that you love.

Tony: I reckon you do. Are you married? Got kids?

Tony: You must give me some advice some time about how you fit everything in. I think it was Charles Wesley who said that he was so busy and he had so many sermons to preach that he had to pray for a couple of hours every day to fit everything in.

Derek: I believe that.

Tony: Tell me about the song "Bigger, Better Things".