Duke Special: The Gramophone Adventures of an Irish singer songwriter

No wonder Irish singer/songwriter and cult hero Duke Special called his 2005 breakthrough album 'Adventures In Gramophone'. The singer/pianist's recorded history has been a long and fascinating adventure. Consider the three occasions his warmly rich tones have made it to the Cross Rhythms radio 'A' list. In 1997 he was heard, as the lead singer of his unclassifiable pop rock duo Booley House on the song "Chloroform". In 1998 he turned up - as session singer Peter Wilson - for Spring Harvest Praise Mix's pumping dance music transformation of Delirious?'s "History Maker". And in 2005 he was showing just why Duke Special's eccentrically unlikely fusion of 1920's vaudeville and 1960s Motown was making him an "exciting new artist" darling of The Times and Mojo on the haunting "Last Night I Nearly Died". Yes, Peter Wilson/Booley/Duke Special's particular Gramophone Adventures have been considerable and though the singer, songwriter, pianist's new status as a mainstream act who has toured with Van Morrison and Snow Patrol puts him in a more prestigious arena from the grassroots Christian scene where he once cut his musical teeth, it's Christendom who provided his first supporters. Judging from his massive popularity at the Greenbelt Festival it's a following that shows no sign of diminishing.

It was at a press conference at Greenbelt 2007 that the songsmith with the kohl eye liner and the Rastafarian style dreadlocks spoke about his recorded works prior to his metamorphosis as Duke Special in 2002. Duke was asked if he was ashamed of any of his early praise and worship recordings. He replied, "My faith is something that I'm not ashamed of though there are some praise and worship albums that I'm a bit embarrassed about because I don't think they were well produced in the same way as I'm embarrassed about other albums that I've played on that I wouldn't want to see the light of day. But I don't care if any one knows about my faith, but in the same way, I've never wanted to be tied down to any particular genre of music or don't want to be known first and foremost as a Christian musician - that's a red herring anyway. I don't care anyone knowing about my faith."

Born Peter Wilson, the singer grew up in Belfast with his mother, father and three sisters. He recounted, "My most favourite thing was to sit in the dark, playing the piano. Music was all I wanted to do. My sisters and I all learnt piano. It wasn't an optional activity." When they were young, Peter and his sisters would sing traditional Irish songs in churches and community centres. "That's probably where my sense of melody comes from, from folk music, church music - music for people to sing together."

In the mid '80s he played in cover bands in school before pop music evangelists Heartbeat offered him an audition to play keyboards with the band. However, by the time he'd arrived at Maimesbury, Wiltshire for his audition with New Generation Ministries (NGM) Heartbeat had broken up. But he was offered instead a place in a new dance pop outfit 65dBA as joint vocalist with Shaz Sparks. The group's first release, 1992's 'Out Of Water', a humble cassette-only shared with another NGM outfit Rhythmworks, hardly set the Christian music world alight but it did showcase early Wilson compositions "Step Back" co-penned with Matt Wanstall and "Fish" co-written with Robbie Bronniman. By the time 65dBA's first CD 'Great Awakening' arrived in 1993 Peter had left the group (who eventually became simply dba consisting of just Bronniman and Sparks).

Peter Wilson went back to Belfast. He formed a duo with one of his friends, Andrew Mitchell, and as Booley House recorded a couple of independent projects, the mini-album 'Time Is Right' (1996) and an album 'Lemonade' (1997). He did some praise and worship sessions with producer and old 65dBA associate Matt Wanstall but by 1999 was finally making some headway, not in the world of low budget Christian music recording but in the mainstream. His album 'Bathroom Floor' released under the name Booley on tiny independent Medieval Haircut got a rave review in the September 2000 Mojo magazine. They enthused, "But if someone held a straw poll of all those in the city fighting for the main chance, all the begrudgery and backstabbing would suddenly cease and the name of Peter Wilson, aka Booley, would echo in the streets. But just because Wilson is the sort of warm-hearted, no-hang-ups bloke that rock'n'roll so rarely produces doesn't mean there's anything namby-pamby about his music. After years of genre-hopping. . .he's finally found a sound to encompass his muse in all its restless energy: a rockier take on Ben Folds Five - with quirky powerpop barnstormers in 'Patrick Moore', 'Tesco Queen' and the title track - and a dash of Aimee Mann grit on the more reflective material." 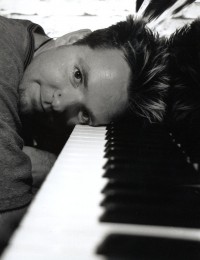 ICC briefly distributed 'The Bathroom Floor' into Christian retail but in truth the singer/songwriter was moving further away from the Christian sub culture with each gig and recording session. By 2001 a new album, 'Garcon Pamplemouse', was released under the bewildering name Benzine Headset. But within months the hugely talented singer/songwriter had finally settled on a name and a haircut. Duke Special was born. He told Q magazine about his moniker. "I googled music hall acts and a lot of Dukes came up. Special just sounded good next to Duke."

His new persona reflected his growing interest in music which had a more theatrical approach. He explained, "I got really interested in vaudeville and music hall. I loved the idea of all these strange Victorian entertainments with their crazy descriptions. I recognised that spirit in what I was doing. I wanted everything to sound 'old'. But most of all I wanted to be entertaining."

On stage he was certainly that. Accompanied by percussionist "Temperance Society" Chip Bailey, who plays cheese graters and egg whisks, a Stumpf fiddle and a Shirdi drone box, as well as the more typical drums and cymbals, his stage act was a masterpiece of droll surrealness while his songs - part Badly Drawn Boy, part 1920's music hall - attracted immediate attention. His limited edition EPs for Hag Records 'Lucky Me' (2002) and 'My Villain Heart' (2004) might have been hard to find in the shops but they were creative delights. By the time the tracks on them were compiled to form 'Adventures In Gramophone' in 2005, Duke Special had clocked up hundreds of appearances, supporting acts like Aqualung, Rufus Wainwright, Paddy Casey and John Power of The LA's. In 2006 he toured Ireland with Beautiful South and Europe with the Divine Comedy. He also signed with V2 Records and released a critically acclaimed album 'Songs From The Deep Forest' which was nominated for the 2007 Choice Music Prize and for the Meteor Music Awards.

At the Greenbelt press conference he spoke about the approach to his songwriting. "Freddie Mercury once said, 'songs are disposable' and he was very happy with that. I want my songs to have some depth. If people only wanted to be entertained they are still going to get that but if they want to scratch a bit deeper it's still going to have some depth to it as well."

After his years of dues-paying this father of three is only too aware that his latterly found success in the crowded showbiz arena is a huge blessing and he goes out of his way to treat his audience with respect. "I've been in some pretty awful venues but I always try to put on a good show. As a songwriter, if they can connect with the emotion or the content of the song, that's such a fulfilment, a great thing. So I write songs primarily to express something. I want to make a connection with the audience."

I first saw Duke at Greenbelt 2009 on mainstage, absolutely blew me away. His lyrics and melodies take me to a better place :)

For me I wish Christian artists who go mainstream would do 2 things, 1 be a good witness and 2 tell people about it. I'm not judging Duke or anybody in particular just a generalised comment!

Anyway, I love his music!

I was born in Belfast. My nephew plays guitar for Snow Patrol,Peter Wilson toured with.Van(the man) live down the road from my home in Bangor.
I am a Christian songwriter,Praise and worship songs that thrill my soul. Peter Wilson has gotten away from Chhristian s/writing. It seemed to be a stigment to him.
I love my faith and recommend Christian faith to everyone that reads this comment. God bless everyone that reads this comment. John.

Wow that was a good read. I always liked Duke but I had no idea he was a christian. And he did a dance remix of delirious' history maker? Shocking. Good article!

Despite knowing a bunch of this stuff previous, it's nice to see it all pieced together!!

I still have more distinct memories of the times when I've seen Peter play than many supposedly important moments in recent history! Booley on mainstage GB, seeing Duke for the first time in stage 2 GB with about 40 other people etc etc...

The man is a legend and a massive influence over so many young songwriters that I know...

I agree. I had the joy of interviewing Chip Bailey on a short licence radion station in Swindon earlier this year, but this has filled in a few gaps for me too. Duke is a marvellously talented and winsome performer and it's been a pleasure to see him getting the attention he deserves.

Fantastic article Tony. There's so much we didn't know about The Duke that's been uncovered now. What a talent the man is, and what a long road to the status of 'new' act. I snirt indeed!

Absolutely brilliant article! God only knows how you got all your backround information because Duke is usually quite secretive when it comes to this. He's my favourite singer since early 2006 and i saw him play again in cork last night-simply class! Any ideas where i could buy the Booley album of 2000 that got the rave reviews??