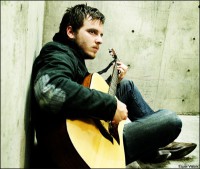 It's been an extraordinary couple of years for the Californian-born singer, songwriter and guitarist Dustin Kensrue. From 1998 until 2012 Dustin fronted one of the most popular alternative rock and melodic hardcore bands of the era, Thrice, and the albums 'The Illusion Of Safety' (2002), 'The Artist And The Ambulance' (2003), 'Vheissu' (2005), 'The Alchemy Index' (2006), 'Beggars' (2009) and 'Major Minor' (2011) coupled with years of gruelling touring brought Thrice huge popularity in the mainstream. Then Kensrue, whose lyrics with Thrice had long indicated his strong Christian faith, shocked the music industry by announcing he was stepping away from the band to take up a position a worship pastor for Mars Hill Church - the megachurch based in Seattle that came to include 15 branches in five states. Kensrue then in 2013 released 'The Water & The Blood' album, acclaimed by some Christian critics as one of the best worship albums of the modern era.

But all was not well at Mars Hill, with pastor and founder Mark Driscoll becoming embroiled in controversy amid accusations of plagiarism, questionable leadership practices and overseeing the mismanagement of funds. Last October, as the church fell increasingly into disarray, Kensrue stepped down from his position and moved with his wife and three daughters back to California. Although he played no part in the darkness surrounding Mars Hill, Kensrue felt acutely the painful disintegration of Mars Hill. But then in December 2014 Thrice with Kensrue announced their intention to return to the scene and on the 16th of this month the band are set to play the Skate And Surf Fest in Asbury Park, New Jersey, followed by the Amnesia Rock Fest in Quebec in June and the Hevy Music Festival in Folkestone, England in August. Not that Kensrue's sojourn with Mars Hill has discouraged the singer/songwriter from releasing solo albums. On 21st April 2015 Vagrant Records released Dustin's 'Carry The Fire' solo project. It has received enthusiastic reviews, Brian Shultz writing in Alternative Press, It's a robust and decidedly enjoyable affair with crystaline production... similarly rollicking pacing, memorable melodies, stylistically variant characteristics and lots of loving odes to his wife," while Tim Karan wrote for Diffuser.fm, "Although the album is by no means strictly acoustic, it almost could be as Kensrue often assumes a Springsteenian cadence on tracks like 'Death Or Glory' and 'In The Darkness' (which also uses a jangly, new wave guitar sound reminiscent of [Kensrue's occasional worship band] The Modern Post)."

In a recent interview Tim Karan asked Dustin whether he felt that the very public closure of the Mars Hill Church clouded the many good things that it did. Dustin responded, "Well, that's complex because a lot of the good the church did was also directly related to some of the key people who were causing the problems. That's human nature, I guess. When you amplify something and you've got someone who has a lot of influence, the good they can do can be pretty profound, but they can cause a lot of damage, too. I don't think blame for it lands on any one person. But it was a weird, weird thing to go through. I wasn't there because I liked it more [than his time with Thrice]. I was there because I felt like that's where I was supposed to be at the time. I had a lot of peace about it, even though there were certain things that weren't ideal. I felt right staying there as long as I did and now I feel a lot of peace about getting back into making music full-time. I'm really excited about it."

The move to Washington and then back again to Orange County cost Dustin and his wife a considerable amount. He explained, "When we moved up to Washington, we sold our house in Orange County. We thought about renting it out, but we were like, 'What if someone trashes it and doesn't pay? Can we get through that?' So we ended up selling it, but the Orange County housing market is brutal, it appreciated like 50-percent while we were gone. So now we have to rent a place and we're fine with that and we're saving up some money again. But it was stuff like that - the money we lost while moving around - that makes you start to second-guess yourself. It was like, 'Was I really supposed to do that? Was it a big mistake?' But I don't think it was. I look back and feel like, at every point, I was doing the right thing for me and my family and that's all you can ever really do. You can't tell what the future is going to hold. But, yeah, there was also some rough stuff to deal with - just how intense the last year and six months were. I think it really affected my wife more heavily at first. Now it's all kind of landing on me in a really obscure, ambiguous way. I can't even really describe it."

Dustin is now established in a new church very different from megachurch hype. He said, "I'm at a church called the Village Church of Irvine. It's a small church. I'm leading worship there once or twice a month when I'm home. But I took a break from doing that for a good five months or so."

Dustin considers that his 'Carry The Fire' album is the true followup to his 2007 solo project 'Please Come Home'. "It's a record I've been trying to make for eight years and never found time. Some of the songs come from ideas I had back when that record came out and some of them are newer, but I finally got to track them all. I did it in a room in my house and used [Apple's] Logic - it's, like, $200, which is sweet. I think it's crazy how cheap that programme is for how professional it is. All I really invested in was a couple of studio monitors, speakers and a decent interface for the pre-amp for the mics and stuff. I used an Apollo Twin [interface] and bought a microphone that I actually didn't end up using. I mostly just used this one microphone my dad had given me a couple years ago. I didn't realise it was a great vocal mic, but it turned out to kind of be the savior of the record."

Dustin doesn't think that the division between his worship material and his songs for Thrice is particularly great. He said, "There's always been somewhat of a natural difference between the styles, but I think that actually breaks down a little bit more on this record. The song 'Carry The Fire' could possibly be a Thrice song. The main difference is that my solo songs start more as 'songs' whereas Thrice songs start as just 'parts' that someone brings in. Then we all jam on it and contribute and build it up very democratically and messily. What separates the worship stuff is purpose more than anything. I could write a marching song for a band to march to, but there's always going to be certain parameters that make it a good marching song. There will be times where someone is going to want to play or listen to that marching song, but I think its function is a bit more focused. So, for a worship song, I'm thinking, 'Okay, people gathered together will be singing this, so I'm going to limit my vocal range and I'm going to try to have really strict meters where it's easy to learn and memorize.' I'm also probably going to use a clearer language - not less poetic, hopefully - but just a song to enjoy. Some of the fun of listening to certain songs is trying to decode or get underneath the level of meaning. But with a worship song, you want it to be really clear what you're saying because someone is going to be singing it and you want them to know what they're proclaiming in that moment. So I'm not looking at things in terms of audiences, but more in terms of the purpose of the song." He laughed, "I'm not really writing to please anyone but myself anyway."