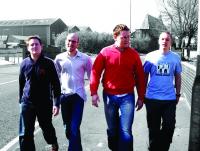 "Don't burn out; keep yourselves fuelled and aflame. Be alert servants of the Master." (Romans 12:11). This scripture from The Message sums up what Welsh rock worship band Fuelled are all about. They're in it for the long run. The vision for Fuelled began as brothers Adam and James Hewitt and bassist Ste started leading worship for the Youth Alive meeting at their local Church @ The Foundry in Widnes, Wales. Feeling they were incomplete without a lead guitarist, Kris Morris from Australia came at just the right time, answering their prayers. Adam shares, "We really went from strength to strength when Kris joined."

Shortly after, in the spring of 2003, Fuelled made a four-song EP, 'Completely'. It was no ordinary independent debut. The group were able to enlist the help of Pete Coleman, a big producer in the mainstream who has worked with ACDC, Sabbath, Echo And The Bunnymen and The Charlatans. The EP would prove to be the fuel (no pun intended) that would propel the ministry of the band. Adam explains, "We're not striving for anything in particular, except to do what we do - that's to lead worship with a passion. As a result, we began to get invited to do more and more events including youth groups, rallies and camps in the towns surrounding us."

One thing that sets Fuelled apart from other worship groups is their devotion to Paul/Timothy-like relationships within their local church. "Fuelled's ministry is two fold," Adam shares. "The main thing is to go out and lead worship passionately wherever we are. Our other aim is to encourage and raise up worship leaders behind us - particularly in the youth groups we work with. Right now there is a young band who have started to develop through us. We absolutely love to bring people on and encourage them. It's who we are."

Leading worship, Fuelled have witnessed the works of God in their midst. Adam comments, "One of the coolest things that happened was at an event in Warrington. At the start of the night we were getting little response. We had a short break while the preacher was up, and we were praying, 'God, you've got to move in this.' And he did! It's one of those moments you know it's nothing you've done yourself. To see 150 people (who didn't seem interested at all when the night began) with their hands in the air, giving their hearts and their lives to God was just amazing."

They see themselves as vessels to be used for the purposes of God. Adam concludes, "God will do what he'll do through us if we remain humble and seek to do his will. We all agree that the day we feel the heart going from it we'll stop." But until then they will continue to bring their raw and ready tunes to young worshipers all over the UK.

For more on Fuelled visit the Fuelled artist profile