EJ: A grassroots gospel duo from the East Midlands 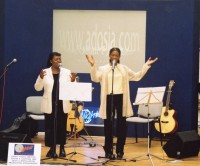 Mike: Who are EJ?

Esther: The group consists of my sister Julianne Stapleton and myself. We are based in the East Midlands.

Mike: Sum up how you see your ministry - what do you want to do?

Esther: We see ourselves as singing ambassadors for Christ, spreading the Word of God that encompasses hope, faith and peace. We hope that people will feel the awesome presence of God as we sing. We want to sing in places where the Gospel is not usually heard. Business conferences, shopping centres, exhibitions and television programmes that are not targeted at Christian viewers. We want to raise awareness that God is still relevant today and can still transform people s lives.

Mike: Go on, hard sell the album - why should we buy it?

Esther: This is the debut EJ album, by Esther and Julianne. This album has made history by being this first gospel album to be launched by the first female gospel artists in the UK who also launched a record label simultaneously. The album comprises of 10 original songs written by Esther. The songs have differing styles encompassing traditional and contemporary sounds.

Mike: Besides yourselves, who's on the album?

Esther: The album features musicians who have worked and performed with Gabrielle, Lauryn Hill, Des'ree, All Saints and many more. Brenden Guyatt, BBC Radio Leicester nominee, an established singer, is featured dueting with me. Brenden has sung with some of the best gospel singers of our time, the Winans, Take 6, Kirk Franklin, Chris Willis and many others.