Echolab: The Bournemouth-based band finding inspiration in a pub toilet

Tom Evans reports on a bright new rock band from Bournemouth ECHOLAB and how they discovered their unusual moniker.

In a church age where seemingly every town in Britain has at least one modern rock band offering an edgy guitar variant of the Old Old Story, it takes something special to stand out from the crowd. Echolab from Bournemouth seem to have that elusive commodity. Their debut album 'Always In Your Grace' has just been released by bright new independent label Risen Records. Judging from the enthusiastic reception the band received before a 500 or so crowd at the album's launch at Yeovil's Nth Fest, the band are all set to expand their West Country following to a national fan base. At the Nth Fest Tony Cummings quizzed Echolab about their past, present and future.

The four piece band have, according to lead guitarist Sam Davis, "probably been together for about two years now, three years even (feels like two) doing it as Echolab. Maybe a bit more time before that, because we played together in church every odd Sunday and it kind of just grew from that really." With Echolab not being the stereotypical name of a Christian rock band drummer Matt Coates explained the unusual place where the band found their name; "We were trying to come up with a band name, so we were all sitting round in our local pub trying to discuss what names we were trying to come up with and half way through I needed the toilet. On the soap dispenser it said Ecolab and from that Echolab came about."

Echolab have been signed to Risen Records since October 2005. The label is headed up by a family member of another excellent Somerset band, Brother John. "We're really good friends with Bosh and Brother John and they just invited us onto it," said leader singer Chris Hunt, "so after a bit of prayer and thought we felt it was really appropriate being within the Nth Degree to actually be accountable with other bands to help and support each other too. Risen Records for us is an excellent way of having some backing, some help, but for also for us to be accountable to someone. We're determined, not just a band who start off really going with Jesus and then if anything happens we'd sort of lose it a bit."

Their album 'Always Your Grace' is an extremely accomplished piece, especially for a debut. The recording was all done with producer, engineer and friend Mark Thomas. Explained Chris, "He offered to record it for us, really top bloke and he's got an amazing talent so we took him up on the offer, spent a long weekend up there together and had a really good time. It's been a process of Mark producing it and mixing it down over the last few months and it's finally been released." 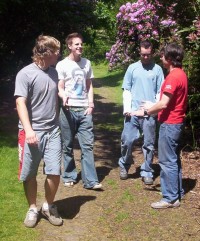 It's taken about years two for the album to be completed. "The first song which was written was probably 'Intensify'," said Chris. 'Intensify' is one of the album's standout tracks, which sees the lyrics succumbing to God as the music reaches for the stars. The extent of their faith is definitely evident through the music they have produced. The title track, penned by the band's bass player Richard Crocombe, is a very emotive piece featuring lyrics like "for you along are worthy to be praised, for you alone are great in all your ways" and building to a towering crescendo.

Echolab have graduated up from just playing churches and pubs. Frontman Chris commented, "What we're doing now is probably bigger than what we ever expected to do and just what God's doing. We've had the chance to play at Glastonbury festival, which is unbelievable. It was in a church tent, but it was still a great experience to be there."

What does the future hold for Echolab? Are there any plans for a new album? "I've written about three for the next one. I think Chris has written some as well," said Richard. However the band are just content with the fortune they've been blessed with. Enthused Chris, "I mean, we didn't ask for it and God has opened doors. We're just happy with what God's putting in front of us and just taking it each step at a time."

HEy, these guys are awesome, trust me!
If you ever get a chance to see the GO GO GO !!

hmm... its a good article. but i was told it was chris who discovered the soap dispenser... and it makes them sound as if they're from somerset..

Go Echolab!! Your new album is awesome!!! Hoping you all the best this year!! Go for it with all guns blazing!!! The cross is empty.

For more on Echolab visit the Echolab artist profile