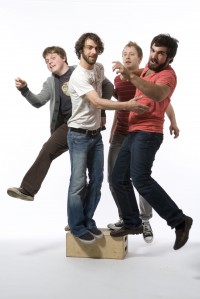 It's only too easy for rock critics to caricature the bands signed to America's CCM companies as plagiarists who merely ape the stylistic innovations of Coldplay, U2, etc, add some God lyrics and call the resulting CDs "ministry". But though there are on today's Christian music scene an embarrassing number of bands cloning Delirious? or Jack Johnson sweeping generalisations about ministry-orientated acts fail to take account of highly original CCM signings like Mae, Daniel Amos, Fort Pastor or Long Island's Edison Glass. The release of Edison Glass' new album 'Time Is Fiction' confirms what we encountered when 2006's 'A Burn Or A Shiver' was released - that here was a band who wed musical intelligence to songwriting hooks and display a depth of innovation which might reflect an occasional Mars Volta or Police influence but also brings in clever musical passages of pristine originality. Reviewing their new album critic Brian Quincy Newcomb described Edison Glass' sound as "smart, progressive chops wed to vital, accessible song structures with evocative lyrics that point to the One Great Mystery that is easier experienced than explained."

On 'Time Is Fiction' the band display their characteristically poetic lyrics by making use of Victor Hugo's triumphant fictional character Jean Valjean from the Les Miserables classic to ask "Will good overcome religion? It's a battle between grace and pride. . . Will grace overcome what was done." Edison Glass' lead singer Josh Silverberg spoke to CCM magazine about the album. "I feel we've taken down some of the boundaries. We've enabled ourselves to be a little more creative. In the past, we would need to write an up-beat rock song or a real moody song. Now we're more inclined to write music that's what we're feeling and not be so worried about genre. Instead of trying toward a certain style, we're writing whatever happens and letting that be the style."

Adding his thoughts, guitarist James Usher commented, "I think it's becoming a more natural process. It's more about getting the music inside of you out, and not so focussed on trying to write what we think people want to listen to."

The band offer lyrics that are full of faith and hope yet far from the evangelical slogans and biblical paraphrases that clog up parts of CCM. Said Silverberg, "We definitely do everything we can to create imagery that avoids popular phrases and whatnot. For us, it's about digging deep to find how to say what you are feeling without sounding like it's already been said a thousand time before."

The roots of the band go back to the mid-'90s when lifelong friends Josh 'Mountain' Morin (lead vocals, bass, keys), brother Joe Morin (drums), Josh Silverberg (lead vocals, guitar, keys) and James Usher (guitar) began to play together. After a couple of name changes (including Edison), the band came up with a moniker concocted by an unlikely combination of names, famed inventor Thomas Alva Edison and composer of classical avant-garde music Philip Glass.

Each member of Edison Glass found music to be their creative outlet at an early age. While some in the band began piano lessons at around the age of eight, Silverberg penned his first song in kindergarten. The students dabbled in everything from Nirvana covers to Bach, from complex orchestral arrangements to the murkiest depths of punk rock. Drawing from a soup of indie rock, art pop and classical influences, the young musicians gradually developed their own approach to rock music. Said Silverberg about the creative process, "It's like breathing, if I don't I will die. It's burning inside and it needs to come out. To me, composition and creative thinking is absolutely essential."

James Usher spoke to Andy Argyrakis about their early years of dues paying. "We started really young. When we first started playing, the youngest was 12 and the eldest was 16. We did worship at church and always wrote our own songs. Songwriting has been one of our strong points and all four guys all contribute. We did a little bit of touring, played in our basements and played shows around Long Island. We went to college, which was our first time being away from home. We were indie for a long time with three full-length albums and a couple of little EPs. We came to a point where there had to be a decision. Do all of us want to put our hearts into this as a career? Are we completely devoted to taking this as far as we can? Can we make this more than a creative outlet and into a lifestyle with touring? Once we all decided that, we spent a year talking with different labels, met the people at Credential Recordings, signed up to do a record, left college - and we've been doing that ever since."

Usher has a lot of praise for EMI CMG's Credential subsidiary. "Credential is all about something new going on in the music world. They're reaching a whole scene of music and fans that maybe the mainstream media misses out on. It's geared toward very purposeful artistic music that's doing something new and innovative - a little outside the box. I don't know how to say this without bashing other labels, but they're reaching into different fans that have been neglected, especially in the Christian world. Sometimes you realise the general market tends to be considered more legitimate. Some people in the [secular] business world won't even give our record a chance because the word "Christian" is attached. Credential is all about being real legit with hard working, well-connected people instead of the usual suspects."

The fact that Edison Glass' Credential debut was produced with one of mainstream rock's big names shows their label was thinking outside the box. Brad Wood (The Smashing Pumpkins, Sunny Real Estate) was assigned to produce 'A Burn Or A Shiver' in Los Angeles. Before moving into a hotel room for the last couple of weeks of recording, the band spent their nights in their converted school bus parked behind a Jack In The Box fast food outlet near Wood's North Hollywood home studio. The rough-and-ready accommodation didn't seem to hurt. Enthused Wood at the time, "I am floored by the energy that Edison Glass put out - manic drums and bass, two singers in full voice. They love what they do and it shows. It was a thrill to try and catch it all on record."

When 'A Burn Or A Shiver' was released it became something of a critic's favourite. From the driving energy-sopped choruses of "Forever" to the weighty measured intensity of "This House", the album was packed with intriguing musical ideas. At times there were both lush pop orchestration and complete Devo-esque breakdowns in the same song. But somehow it worked masterfully.

As it turned out, 'A Burn Or A Shiver' was no flash-in-the-pan. 'Time Is Fiction' is again crammed with clever and eclectic musical ideas. The album was produced in Nashville with Nathan Dantzler who has also produced Credential band Lost Ocean. Enthused Josh, "Nathan is an excellent engineer. We co-produced it with him. It was another awesome experience. He's about our age and it was just a whole lot of fun. We had a blast. We did two sessions, one last winter and one this winter."

The band shared their thoughts about being labelled "Christian". Said Josh Morin, "There are a lot of Christian bands that are being a lot more innovative now with how they write music and what they are doing. It seems like that a label doesn't really need to be there anymore, with the difference between Christian music and 'secular' music, because, I don't know, music is music. It affects everybody, you know? Just because you believe in something shouldn't have to pigeonhole you to a certain label or anything. I think that's pretty lame. . . that you get slammed just for being in a 'Christian' band."

James Usher added his thoughts, "There's this song on our new record called 'Time Is Fiction'. A lot of what it says is about everything being part of a song. Everything. The sound of footsteps, the rustling of leaves and, yeah, the labels we put on things are just that, labels. And it just sucks that we kind of have to box everything and put it in all these funny places. Either way we make noise or we make music. People are going to call it what they will, it's really not up to us."

Joe Morin continued, "When a band is labelled a Christian band it automatically has the assumption that you're the same as everybody else, as any other Christian that's done it before. It puts you in this position where everybody thinks you're the same kind of Christian as the wacko charismatic Christians you see on TV, where in reality everybody is different and has different personalities. So, I think the individualism of the musician can really be taken away if they are just called a Christian musician. I think we're individuals, in and among ourselves. Actually, in Edison Glass we can probably all go off and have our own side project careers if we really wanted to, because we all individually write our own music. I mean I don't know how much more individual it gets that that, musically. Yes, we are personally Christians. But we're also individuals that have different thoughts about our own spirituality. I think it's just a matter of the public accepting the fact that these guys believe what they believe and they may speak about it, they may not."