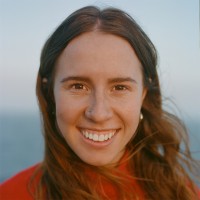 The one thing the vast majority of followers of modern worship music know about Elle Limebear is that she is the daughter of one of the world's best-known worship singer/songwriters, Martin Smith. Elle has lived her life between two worlds. As the daughter of the Delirious? man, Elle has experienced first-hand the thrill of stadiums filled with people worshiping together while on tour around the world. But as a worship leader and youth pastor in Brighton, she is immersed in a close-knit, daily ministry within her community. She said, "Singing and leading worship with my dad is my favourite thing. I've watched and learned from him since I was a little girl - my whole life he has let me fly."

When Elle signed to the Provident Label Group in 2018, the system of launching an important Christian music ministry was changing. Where once record companies would launch with an album release, the streaming era required a new approach and, throughout 2019, a stream of Elle Limebear singles were issued. The first of these, "Holding Me Still", is about how God is the God of the infinite, yet he is also God of the intimate. It's a profound mystery that the God who created the heavens, earth and the whole universe also breathed life into our very beings. He knows every hair on our head and holds our heart in his hands. We can look back on our lives and see a thread of God always being with us. He's always been there, and he is always our source of peace and calm. Elle's song subsequently went onto the Cross Rhythms radio playlist.

More singles followed: "Call On Your Name" (issued in February); "Maker Of The Moon" (March); "Find Me At Your Feet" (April); "Fly" (May)". In June, all the singles were released on an EP, called appropriately enough, 'Elle Limebear'. She told the Louder Than The Music website, "This EP is a collection of songs that were birthed from stories and moments of revelation in my life. There's a real mixture of joy, awe and surrender in these songs. I worked with people all over the world, from my hometown in Brighton, UK to Nashville, USA. I always write with the person listening in mind and my hope is that this collection of songs will meet people where they are and take them on a journey of discovering more of who they are as they look at the wonder of who God is."

When asked who were her major musical influences, she responded, "Honestly, my style of music reflects my personality. I love dancing, so some electronic vibe drips in and some groovy bass lines. Combined with epic, cinematic, wonder-full moments that lead me to look up in absolute awe! In the studio, anything can happen, I haven't really got a specific pallet of sounds that I always come back to. Sometimes I think the thing that ties it all together is the sound of my voice. My dad has always been a massive influence - he's my hero! I listen to a lot of stuff - Bon Iver, Hillsong, London Grammar, Leon, Sigrid, Steffany Gretzinger."

Now, with the release of her full-length debut 'Lost In Wonder', things are clearly moving to the next level for the Brighton-based worship leader. She told CCM magazine about the project, "These past few years I've been writing, recording and working on my debut album. It's been an incredible journey that started way back in 2017. This project is a collection of my revelations from being a young girl until now. We can't escape the wonder of God's glory and creation, it's everywhere - we just have to open our eyes. We've been brought from being lost in darkness to light. But to be lost in wonder is to be lost in the wondrous light of God."