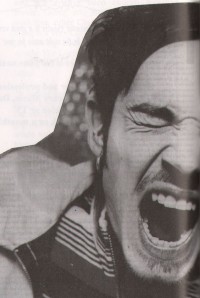 The last minute addition to the Cross Rhythms '97 bill of Eric Champion brings to Britain one of the most talented and exciting performers on the US scene. As all listeners to UCB Cross Rhythms will know, his current album 'Transformation' is a red hot sizzler which both the searing title track and the equally stonking "Sparkle In Your Beat" getting heavy rotation (radio jargon for being played a lot). Any new-to-CCM-listener who's heard the raucous guitar rock of 'Transformation' might have imagined that Eric's formative musical years were spent listening to Nirvana and post-grunge power pop before stepping into the studio to deliver his incisive brand of modern rock with a Christian message.

In fact, Eric Champion despite being only 26 years old is a CCM veteran who's been singing for Jesus since he was knee high to a grasshopper. And his years in CCM have seen a staggering series of stylistic U-turns which probably would win him a Dove if they ever do a Versatility Award. You think I exaggerate? Consider this - Eric started off singing close harmony Southern gospel with family group the Champions; switched to blue eyed soul when signed to Chris Christian's Home Sweet Home Records at the tender age of 18; startled everyone with a pioneering concept techno album 'Vertical Reality' in 1994; and has now reinvented himself as a guitar rock hero. He gave CCM magazine a bit of insight into his stunning stylistic changes.

"When I started in Christian music I was willing to do whatever (anybody) wanted me to do. And at 18, I don't think anyone knows exactly who they are or what they want to do with their lives. Since then, there's been a process of trying to find my place in the music industry. About two years ago I went on a small summer tour with the Newsboys. It was my first time getting in front of a predominately youth audience. It just felt like that's where I wanted to be.

"So that's what started me changing. After that tour I went back to Florida, put a band together and started writing some new material. Also this was the first time I had played music with other human beings. Before I had just been like a computer programmer, making music with just a computer and a keyboard. For the next two years we wrote songs. All the songs on this record were birthed during that time. Also, I was going through a lot of changes with record companies and wondering if there was a place for me in Christian music."

Charlie Peacock was to be a major help in Eric's time of uncertainty. "I had a lot of people pulling me in different directions and I was confused about what I should do. I met Charlie and he encouraged me to stay true to my (musical) vision regardless of what it looked like to other people, if that was really where God called me. That was all the encouragement I needed to just take that step of faith. Once I did, it was about another year and a half of total faith walk - not having a home, record label-wise - but sticking with my vision. I met with the guys from Essential and they supported me in the vision and gave me free reign. I was able to make the record I really wanted to make. And I think it will help me communicate with the audience that I care about reaching -young people."

Eric's press pack suggests that with 'Transformation' we can "meet the real Eric Champion." In view of the fact that his previous albums were self-produced, one has to ask what was not real in his earlier (excellent) recordings. "All of the work that I've done has definitely been a part of me. But it's represented only about 15 per cent of my interests. The demo tape that got me into the industry had a bunch of different styles, but when I got started, (the record company) focused on the dance/pop type stuff. I'm not saying it wasn't a part of me. I still like that stuff."

'Transformation' is dedicated to "John Dallas Champion, who made the ultimate transformation." It seems he was Eric's grandfather. "He is probably the biggest reason my relationship with Christ is as strong and adventurous as it is. He died at the beginning of 1995. Our whole family was there with him in the hospital, and he said, 'I know I've got to cross the river myself, but I just want someone to walk down to the bank with me.' It was the most incredible transformation I have ever seen. I knew the second that he crossed over. It solidified a lot of spiritual things in my life. It was a lot of the premise for this album: the changes that we go through physically, spiritually, even the changes we have yet to go through. It's a continuing process and the end result is going to be incredible. It was that big thinking that he instilled in me."

As well as pumping guitars and catchy hooks, 'Transformation' is full of thought provoking lyrics, like "Dress Me Up" ("I smell like the dirt/I smell like myself and it won't come off."). What would Eric like to take off? "My biggest flaw is I tend to be pessimistic. A lot. And believe it or not, the roughest struggle I've had is self-esteem. I think it is partly because I so much want to please God that when I don't I really beat myself over the head."

Another intriguing lyric is "Temptannie". "For me personally, the biggest struggle wasn't with drugs, alcohol or smoking, but with relationships - dating relationships more specifically. I was looking for a way to battle that and, as the song says, you can be a spiritual giant, but if you're in the wrong place, it would take a Herculean effort not to give in. ('Temptannie') was definitely written by me as a way to deal with it. It is very difficult to be a Christian young person these days with sex being (portrayed in the media as) a natural thing (in the) growing up process."