Join Jan Willem Vink as he discovers the brave new world of the ground breaking new album by an American muso called 'Sam', aka ERIC CHAMPION. 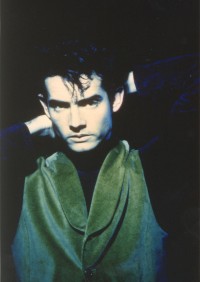 "I'm Sam, just Sam, it's better than ESC8128.78. Welcome to the undergrid. It may be the past, it may be the present, it may be the future. It may be another world; it may be your own. One thing's for sure, it's all real. More real than you know. Anyway, I'm an inventor, a creator of sorts. They say I take after my father. I'm also a dedicated hacker. You see in this day and age the computer rules the world grid. It is the central source of the transmitting and receiving of information. All information. In fact info became such a powerful commodity that it began being regulated, trafficked and monitored through the mainframe at GovTrol, the all seeing eye of the world grid as we know it. That's why everybody's a series of letters and numbers. So it can keep its eye on you. GovTrol knows everything about everybody. Except me and my friends. We're known as the orphans of the undergrid. You see if you hack hard enough and mess the numbers around long enough you'll eventually erase yourself from their memory banks and fall into the undergrid.

As far as GovTrol knows we don't exist. They call us orphans because most of us lost our parents in what they call the last war - the war of liberation. Well, it's not gonna be the last war and it certainly didn't liberate us. We lost our freedom - free enterprise, freedom of speech, freedom of expression and especially freedom of religion. GovTrol says there is no God. There's no one up there. If it can't be seen, heard, felt, tasted, put through a series of number crunches and printouts and scientifically proven, it doesn't exist. Well, I don't believe that. I know there's someone out there. And no matter what it takes me. I'm gonna find him."

1984 rewritten? Brave New World? No, it's Eric Champion, Christendom's whiz kid, known for self-programming and recording his first few albums and with a feel for sassy R&B-influenced pop-gospel. Now he's back, stronger than ever with a new album, 'Vertical Reality', with some SERIOUS techno dance rhythms. But 'Vertical Reality' is much deeper than that. It's a self-written science fiction concept album.

"I am Sam," says Eric. "It's kind of an alter ego of mine that I wanted to develop and allow him and his personality to come to this project just to give us a dramatic licence to use things that would be a little unrealistic. We could go outside the bounds of reality a little bit, use things to push people's scope of perception of reality. It is something I've been working on for a while, it's been part of me for a while, to give Sam the opportunity to host these people in a journey, so to speak, into the spiritual realm. Everything Sam says, everything Sam feels, everything Sam identifies with and represents is also what Eric Champion represents."

'Vertical Reality' tells the tale of Sam, a computer hacker in a world where individuals are reduced to numbers and monitored through the master mainframe at GovTrol, the agency of world domination. Sam and a group of compatriots have managed to hack themselves out of the system's memory and they set out to find the true God...a concept GovTrol has long since erased from the human data base.

"I've always been a fan of fantasy and science fiction," comments Eric, "and for a long time I've been working on this idea for a story. In fact it will come out in a comic book form later in the year hopefully. It's a story with a very science fiction atmosphere but it represented a lot of biblical and spiritual truths, but also some real political statements, pertaining to the country of America and parts of the world and our position as Christians in the world that we're living in today. So through being science fiction it kind of gives you the opportunity to speak very bluntly in a fictional way and then people have to connect it to reality themselves."

While writing the songs for 'Vertical Reality', Eric found the futuristic themes he was writing about had to do more with the reality of today than he originally realised. Says Eric; "I thought it would be a futuristic representation of what was going on in the world politically and how it could affect us as Christians. But the more I researched and the more I watched the news the more I've come to think that it is a lot better representation and depiction of what is going on now. I don't think it's as much in the future as I thought it was. In different parts of the world this story is very real and represents something that is going on right now, even for Christians."

The sci-fi setting of the songs doesn't prevent them from talking to Eric's heart as well. On asking which songs are his favourites Eric responds, "Probably the most special song to me on this album is a song called 'Endless'. God really used that song to speak to me a lot. It depicts the love of God as you would relate to a human relationship, with a best friend or a wife or a boyfriend or girlfriend. It kind of causes you to understand God's view of you. How you look to him through his eyes. I believe that to a certain point we're worthless sinners, saved by grace. But we also must be the most incredible special thing to God. He just must love us to death, to do everything that he did for us. We sometimes let him down and cause him to be disappointed, but still, his grace is abundant. He just loves us dearly. This song kind of depicts that love he has for us. Sometimes when I feel worthless or depressed, I beat myself over the head and listen to the song and remember of what God thinks of me.

"Another song is called 'My Life Is In Your Hands'. God used that lyric probably daily to me, because a lot of times, in the daily things, you can get bogged down or stressed out, or worried about different things in your life that are going on, and it's so easy to forget God in all those. Because your problem seems so immediate. But if we truly have committed our life to God, committed our life to Christ, and we truly do believe that he is in control, then our lives are in his hands. We just have to have the faith to relax and to rest and to believe that."

For the first time Eric has stepped outside the boundaries of his home recording studio, teaming up with one of Christendom's finest studio musicians, Tommy Simms. "I prefer making music with real live humans," comments Eric. "Especially Tommy Simms, who is so incredibly talented. And it just seemed that our ideas worked with each other. I worked with some people in the past that were like sandpaper because our ideas were so different and we were both going in a different direction. But it was not that way at all with Tommy, it seemed that our ideas fitted very well together and I think that he really helped me achieve the sound that I was aiming for. I did a lot of the programming and he would come in and put his touch on afterwards and it just really gave it that sound that I was looking for."

'Vertical Reality' continues the musical direction Eric has followed on his former album, with music that seems perfectly fit for the charts. "I do actively follow what's going on in secular music. I always have, because it wasn't until recently that I became involved in the Christian music industry that I knew there was a Christian music industry. Before that I was just like most other young people in being a fan of secular music and I still am. A lot of the influences I think you can probably tell, I'm very into the techno thing right now, and I've been involved with and liked this music ever since it came out. In fact what really influenced my whole development in pursuing music was the advent of electronic music technology - mainly British bands and artists. I just really like the sound and the feel, the vibe in the whole thing."