During their performance of their latest hit "Cray Button" at Washington's Creation Festival, Family Force 5's soul Glow Activatur, otherwise known as Solomon Olds, launched out from the stage to crowd surf in an inflatable boat. The phrase "cray button" is slang for "crazy" and that aptly describes Christendom's wild and zany perfectors of crunk rock who, since their launch in 1993, have built up a large support base for their jaw-dropping stage performances and their albums like 'Business Up Front, Party In The Back' (2006), 'Dance Or Die' (2008), Christmas Pageant' (2009) and 'III' (2011). Family Force 5, consisting of Solomon Jerome Olds (Soul Glow Activatur), Jacob Olds (Crouton), Joshua Olds (Fatty), Nathan Currin (Nadaddy) and Derek Mount (Chap Stique), have with their head-spinning fusion of punk, rap, post-hardcore, funk, dance and electronica brought something very fresh to the Christian music scene, much to the bemusement of parts of the Church. When asked about their "Love Addict" video, Soul Glow Activatur commented, "They went Sandi Patty all over again. They went Amy Grant. And most times, it's people that don't understand new art, new videos. . . We want to make music that is for God, but at the same time, we want to make music that people enjoy and that they're not turned off by."

In January this year, the band released a five-song EP for diehard featuring previously unreleased songs and alternative versions of others. Prior to that Tooth & Nail released the 'III' album in October 2011. The band's press release claimed 'III' to be a throwback to their first album. When asked about this by The Christian Post, Soul Glow agreed. "The first album was very aggressive while our second album was more dance-like. We wanted to give the fans what they wanted and not run away from being red neck ghetto kids."

In fact, the singer said he came to the realization he was a red neck while visiting Los Angeles. He recalls being in a meeting talking about their music when someone brought it up. He denied it at first but then said to himself, "I'm southern, I do enjoy watching NASCAR once in awhile, and love fried chicken. . . Yup, I guess I'm a red neck."

Soul Glow says the highlight of the album for him is the song "Paycheck". He explained, "People think it's political, but everyone seems to be having financial hardships. We wanted to write something people could relate to and have something to say, you know, dig deep and make it sound real." 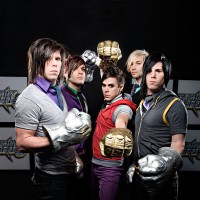 Soul Glow was asked about the band's rather silly stage names. He admitted there were dreamed up as a joke but then started seeing fans wearing homemade T-shirts proclaiming their favourites and knew they were on to something. "Everyone had names, so could white suburban kids. It's part of the culture." In a disapproving and sorrowful tone he joked, "Except for the name Crouton. I don't know what happened there," referring to his brother.

In an interview with Unrated magazine Chap Stique spoke about one of the most attention grabbing elements of their current stage act - a giant drum machine! "At Warped Tour this year we debuted the Family Force 5000 which is a 760 pound six foot six drum machine from the future. It was the first time we showed to earth and we got a great response. We were in Europe a couple of years ago just sitting around talking about amazing shows we have seen. We love over the top experiences and were coming up with ideas on building giant instruments. We were all yelling on the top of our lungs ideas and the drum machine came up. We thought of speak and spell first but it would date us so we wanted to build something from the future. That is what happened."

In the same 2008 interview with Unrated the band were asked about their thoughts about Christian music. Said Chap Stique, "We are definitely Christians and the spiritual element played a huge roll in writing 'Dance Or Die'. However, none of us think that music, lifestyle or people need to be boxed up in little categories. We don't sound, look or perform like a lot of Christian music artists but we are proud of the fact that we love the message of Jesus Christ. It is a big part of our lives so it is never anything that we would deny but we think our music hopefully appeals to everybody. We have gotten a great response from the mainstream market so I think we transcend barriers."

The original recording of FF5's latest hit "Cray Button" appeared on the digital EP 'III.V' released in May this year. The idea of remixing the track with an added rap from Grammy-winning emcee Lecrae came originally from a joking fan's email. The new version of the song was aided by a "Cray Button" video funded by a Kickstarter campaign which gave die-hard fans a chance to contribute to the video shoot. Shot in Texas this summer, with fans travelling from as far as California to be part of the fun. Following the taping Family Force 5 held a private concert for all the participants. Another special guest on the "Cray Button" video was YouTube celebrity Meekakitty, who has used the band's "Zombie" in one of her videos. The video "Cray Button" has subsequently clocked up a huge number of viewings on the urban Christian culture website Rapzilla.

Family Force 5 are currently in the middle of Music With A Mission, a major 24-city tour of the USA with Disciple, Da'T.R.U.T.H., Icon For Hire, Bread Of Stone and Willet. Despite the criticism from the Church's more conservative elements, FF5 continue to connect with large swathes of fun-loving young people. Commented Soul Glow Activatur, "We get criticism from every kind of people. We have our faith but we are still humans that like to have fun. They both intertwine and that is the sound and beliefs of FF5."