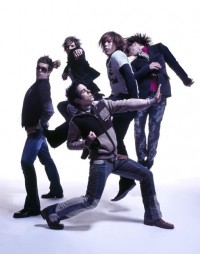 If there's one American band EVERYBODY seems to be predicting big things for it's a phoenix rising from the ashes of the Dirty South, known as Family Force 5. With their head-spinning mix of punk, rock, rap and funk grooves they created a sensation at 2005's GMA and created something of a bidding war amongst numerous record companies both mainstream and Christian. Family Force 5 eventually signed with major label maverick (the company once owned by Madonna) with Gotee Records picking up the band's distribution rights into Christian retail. Their shattering record label debut 'Business Up Front, Party In The Back' is released in the UK by EMI CMG in March.

Family Force 5 were formed in 2003 in Atlanta, Georgia when three blood brothers chose to build their "crunk rock" with two friends. Solomon Olds (aka Soul Glow Activator) plays guitar, sings and generally leads the charge while breakdancing. Jacob Olds (Crouton) plays drums and shares the vocals. Joshua Olds (Fatty) plays bass, sings and doubles as Jacob's twin brother. Nathan Currin (Nadaddy) mans the decks and plays the keys. Derek Mount (Chap Stique) plays guitar and often hangs from the ceiling. As it turns out the Olds brothers grew up surrounded by Christian music. Their father Jerome Olds was a member of one of the groundbreaking Christian rock bands of the '80s, Mylon LeFevre And Broken Heart. After that Jerome recorded albums for Star Song and Urgent as a solo artist. It was Jerome's connections with Star Song Records that got his sons their first recording experience. 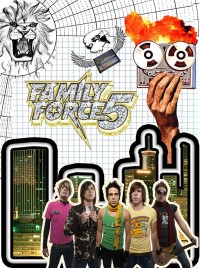 As The Brothers, teenagers Jacob, Joshua and Solomon recorded two albums for Star Song, 'R.P.M.' in 1995 and 'Fact & Reality' in 1996. Neither album sold though they did display the siblings' natural veering towards musical eclecticism taking in everything from Boyz II Men balladry, early dc Talk style raps and a screaming cover of The Who's "Won't Get Fooled Again". But it was of course with the formation of Family Force 5 that their intuitive blending of differing musical elements found full stylistic focus. An independent album release and plenty of hard gigging led to the spectacular growth of an underground fan base. Yet despite all the manic excitement of their stage act, Family Force 5 continue to keep a spiritual focus in what they do. When Solomon gave a message to Youth Specialities youth pastors that was clear. "I can tell you guys how much we appreciate what you do. Continue to pray for the Family Force 5 as we are out on the road doing the same things you guys do but with loud guitars and pink alligator shoes!"

Family Force 5 then are clearly not a band making the all-too-familiar about-face once the big budget mainstream deal is secured. There'll be no toning down of their spiritual messages on 'Business Up Front, Party In The Back'. Said Solomon, "We feel that we need to be a very in-your-face severe kind of band and have that sound because Jesus came and did the most severe thing any person could ever do."

FF5 is A-MAZE-ING! I've seen them in concert twice now, once at NYC 2007 in St. Louis and actually I just saw them on the Support the Heart Tour in Kankakee a few days ago and I have the battle scars to prove it. The concert was awesome and I was front and center so I have some amazing pics of the band, I definately redomend hunting down one of their concerts and going. Tickets were only $12 to the one I went to in kankakee. It's so worth the mosh pit bruises.

I rly love this band! They're amazing.
I'd love to see them live too, but I live in the UK =[

I am 20 years old and I love this band. They are what I was looking for. It is different and I feel that now a days is very hard to get to the youth trying the same strategy. With Family Force 5 something new is growing and I hope that God blesses them to keep blessing other people.
These guys ROCK!!!

I'm a mom of a 13 year old girl and am really trying to see the Christianity in these young men. All I see is an attempt to be like the world. For instance, in X-GIRLFRIEND all I see is jealousy and unfaithfulness in relationships. LOVE ADDICT seems to exalt sex (or at least lust) outside the bounds of marriage! PUT UR HANDS UP talks about "throwin down", partying and seemingly sexual dancing. Guys, I JUST DON'T SEE HOW THIS EXALTS JESUS! Please pray about it!

Hey Kim, I know what you mean. I think they are a great band, and I know that are Christian, but some of their songs confused me too. Here's an interview I read and I think differently of them now.

They are the best band in the world! I love Soul Glow!!!!

I Love Family Force 5!!! I'm so glad my best friend had me listen to them. I wish I could have seen them live. Oh well, someday I will.

I LOVE THIS BAND! they are really cool. they play amazing music and love Jesus. I discovered them on myspace and just bought their cd. i hope they keep doing big things!

i love FAMILY FORCE 5.i seen them on tvu with obadiah and they are my new favorit band.hope to see them in concert reall soon.bye