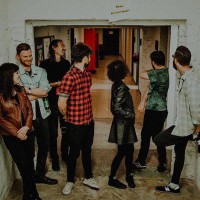 One of the best bands currently working the mainstream circuit since their emergence in 2015, Flight Brigade - Ollie Baines (vocals, guitar), Miriam Baines (accordion, vocals), Dorry Hughes (violin, vocals), Thomas Pink (guitar), Jonny Barker (keys), Tom Clay (bass) and Neil Blandford (drums) - have been making heart-stopping music. The Hampshire-based seven-piece began in 2015 with the EP 'Sirens', captured the critics' attention with their finely focussed 2016 debut album 'Our Friends Our Enemies', surprised their growing band of supporters with a left field Christmas EP and now stand on the cusp of the long predicted international breakthrough with the first of a stream of singles produced by one of the great studio maestros Chris Porter (George Michael, Elton John). Cross Rhythms quizzed Ollie Baines to catch up on their story so far.

Tony: Now Ollie, you've got a single which has just been released. Tell me about that.

Ollie: The song is called "Stranger Things". I was up early and listening to various news reports with Trump's latest tweets and Fake News and Brexit and all these things and it was kind of written in response to that. It feels like strange times. I think it has probably always felt like that through history but we are certainly experiencing some very bizarre things at the moment.

Tony: Political commentary hasn't been the band's thing up to now though, has it?

Ollie: No, not really. We've concentrated more on telling personal stories and stories of other people we've met. But we had quite a strange year in the band last year. We went through some fairly bizarre things so it also kind of ties in with a personal experience as well. In that sense it links to what we've done before.

Tony: Are you able to tell me about those bizarre things which have happened to the band?

Ollie: It's complicated. It wasn't something internal with the band. Often when you're in the music business you're working with different people and things can get very complicated. People around us. It kind of strengthened us as a band actually. It was an amazing thing to get through so we are really pleased that we got through it. We were very fortunate because in amongst it all we got to know this producer Chris Porter who did a lot of George Michael stuff; he's worked with some other huge people - Elton John and people like that. So we got to know him and got to do this album with him. In amongst all the chaos we landed that; it was amazing for us.

Tony: You say an album, so presumably "Stranger Things" is going to be part of an album?

Ollie: This song is part of an album. We'll be releasing tracks from that album. We'll release it at some point next year; the exact date is yet to be decided.

Tony: Did you have all the songs written when you ventured into the studio for the first time?

Ollie: We did, but only just because Miriam and I had just had our second boy, Harley. Mim came to the studio with Harley who was just a few weeks old. It was by the skin of our teeth. We had rehearsed some of the songs but we were in that position 'how does this song go'? But that makes it quite exciting, I think.

Ollie: I think you're right. In some ways it's like a full-on rock band but then I grew up listening to American singer/songwriter stuff. My parents are both into music so I grew up listening to things like James Taylor, the Eagles, Credence Clearwater Revival, Steely Dan, Neil Young. So my background is a kind of singer/songwriter leaning. It's one of the things that has been good being in a band with these guys cos the guitarist and the drummer especially are really into their rock music. When we started I was playing acoustic guitar but that didn't last long. It was an interesting challenge as a songwriter because writing for rock music is so different. It's a real challenge to write songs that have that rock energy but then at the same time work lyrically and melodically, as songs that you could play on an acoustic guitar. Having the girls as well, Dorry adds the string element to it and we've got the female voices as well so it is an odd mix but I think that's what makes us us, really.

Tony: As you probably know, Cross Rhythms is a music which concentrates on music made by Christians. All the band are believers, aren't they?