New Yorker Francesca Battistelli is a singer whose eclectic vocal style has catapulted her to Christian music's upper echelons. Her classy song stylings, described by one critic as a "soulful piano-pop sound that resembles a blend of her music interests - jazz, rock, gospel and R&B," won her acclaim at GMA's 2009 Dove Awards. There the singer won her unprecedented awards for Female Vocalist Of The Year, New Artist Of The Year and Song Of The year (for her first single "I'm Letting Go"). Her track "Beautiful Beautiful" is currently getting a lot of play on Cross Rhythms radio.

Francesca was born on 18th May, 1985 in Manhattan, New York. Both her parents were involved in musical theatre. Francesca was a precocious young talent. She told Cross Rhythms broadcaster Mike Rimmer, "I danced for 10 years. I was Miss Ballerina and I was on the stage in plays and stuff. I would always try to make up dances like doing 'The Nutcracker' all by myself, and in one song I would choreograph the whole thing myself and invite the neighbours over to watch. I was 10 years old."

Francesca's childhood was a very happy one. "I was an only child, raised knowing the Lord from day one. I'm very blessed to have that heritage. I was home schooled. My dad always worked at home and my mother raised me, so the unique thing about my upbringing was that I was home a lot with my parents. I always got on better with adults as I was around them more. I'm grateful for that now, as I can get along with people of all ages."

When she was 15 Francesca became a member of the Orlando, Florida all-girl mainstream pop group Bella. The group's touring performances included singing and dancing, which were "two things I loved," she said. After the group disbanded, Battistelli picked up the guitar and began writing songs. She spoke about how she first began to write her own material. "I went to a little writer's night in Orlando. It was this guy who had written a lot of pop songs and he just sat there with his guitar and played this song he had written. It was so beautiful and something about it made me think that that was what I was going to do and that was going to be me. I just knew it, I wasn't going to be him exactly, but a guitar player who also wrote songs. I always wrote as a child, story after story after story. It was something I was good at already. My first few songs were awful, but once I had started I didn't stop." 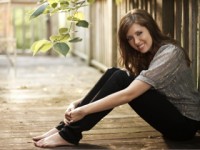 In 2004 Francesca recorded and released an independent album, 'Just A Breath'. She remembered, "All through college I would play at coffee houses in Orlando and the surrounding areas. I would try to do school full-time and pursue this music thing. There were times when I felt it was never going to happen, but eventually the doors just opened. A friend of mine, Manuel from Group 1 Crew - we went to church together for years - introduced me to his A&R person at Fervent Records. He liked what he heard and overnight the right people heard me. You know what I mean. I'd been doing it for so long and when the right people hear you everything changes."

In early 2008 Fervent released the 'I'm Letting Go' EP exclusively through iTunes. All four songs from the EP were included on her record label debut 'My Paper Heart', released in the States in July 2008. The album was produced by award-winning Ian Eskelin, the song "I'm Letting Go" was a smash hit becoming the 16th most played song in 2008 on US Christian radio. Francesca spoke about her breakthrough hit. "I wrote it when I first moved to Nashville, when I first started on the path I'm on now, making a record and beginning Christian music. It's just to say that I'm trusting the Lord and letting go of my expectations of what my life should be or look like. I think we all have them and expect them to go exactly as planned. But it never does and God's ways are always better. So that's what the song's about and I hope people will relate to it."

'My Paper Heart' turned out to be the biggest selling CCM record label debut album in more than a decade and produced three other hits, "Free To Be Me", "It's Your Life" and "Beautiful Beautiful". Francesca spoke about the last song: "It's a song written with my producer Ian Eskelin. We just wanted to write a song about God's mercy. Before he reaches down into our lives we're really nothing that great to look at, but he has a way of making us into a new creation in Christ. He takes the bad and makes it good, turning things on. That's what that song's about, the beauty of God's grace. It's a real epic song and I love singing it. It's dramatic and I think it's beautiful so yeah, 'Beautiful Beautiful'."

2008 saw Francesca tirelessly touring the US promoting her new album. She played solo concerts, a support set with Big Daddy Weave and in late 2008 guested on a tour with worship leader Aaron Shust and CCM veterans NewSong. It was on that tour that Francesca met Matthew Goodwin, percussionist with NewSong and the son of the group's lead singer Billy Goodwin. Francesca and Matthew fell in love and were married in August 2009 in Nashville. The singer announced at the April 2010 Dove Awards that they were expecting their first child. Matthew Elijah Goodwin was duly born on 22nd September 2010.

Recording Francesca's 'Hundred More Years' - again produced by Ian Eskelin - was not without a challenge, as she admitted. "Everything was completely different this time around. When I made the first record, that's all I was doing with my life - writing and recording, writing and recording. But this time I remember thinking, 'OK, if I can just get through these four things - being pregnant, writing and recording my album, moving to a new city and touring!' There were times when I was like, 'I don't know how I can do this,' but I kept thinking, 'I'll be okay'."

Indeed she was. The first single from 'Hundred More Years', the infectious "This is The Stuff", is a major Christian radio hit. Enthused the singer, "I was excited about it and so was the label team, but I didn't know if it was too different for Christian radio. The fact that people have responded really well to it is wonderful. I really hope it will help lift people up. I need songs like that in my life, songs that make you feel better about life, not things that bring you down. It's sort of this CD's 'Free To Be Me' - I'm not perfect but at the end of the day God still loves me and everything's going to be okay."

The themes covered in the lyrics on 'Hundred More Years' are more wide ranging than those on 'My Paper Heart'. Said Francesca, ""There are some very personal songs on this record because what I tend to write naturally is songs from my life, what I'm struggling with and what I'm excited about. But this time I'm definitely focused more on thinking outside my own experience, looking at what other people are going through. I like that about this record."

Many of the songs, in fact, are focused on lifting up others. "Angel By Your Side" is about being the help someone needs, in whatever form it's most needed. "Emily" encourages a young woman to remember her own worth in the grand scheme of things. "You Never Are" urges belief against all odds, "Motion Of Mercy" makes clear the pass-it-on nature of God's love in so many forms and "Good To Know" is a fresh new take on the importance of remembering that despite our mistakes God wants us to return to him.

In all her music Francesca is striving for authenticity. "All I know is that my life in God has called me to a lot of things that require risk and stepping over the line and doing things that are just scary. Whether it's going away to a ministry school, or getting up with my guitar for the first time, I remember that was so scary for me. I was about 16 and I was at a music conference and everyone had been playing for years. In my mind they were all older and seasoned and I was nothing. I was really scared, but it was a defining moment, one of those things where you step over the line and do that thing that's scary. Or whether it's moving to Nashville and saying goodbye to family and everything familiar. Just taking that step and coming here, knowing nobody and doing what the Lord has called me to do. I think there's not enough of that in the world, especially amongst young Christians. We have big dreams and things we want to accomplish for the Kingdom but we're afraid to take the necessary steps, and we don't want to count the cost. I have a song called 'It's Your life' which is about that, just about taking chances and realising that this is the moment and that we're not promised tomorrow. So I think that if I have anything to give as an artist, it's just encouragement to be told to take stands for the Lord and let him take you to the next phase, even if it's scary."