Funky Beehive: British pop funksters who are all things to all men

You can catch them at a pub near you...or at this year's Spring Harvest. Tony Cummings unravels the unexpected musical genesis of FUNKY BEEHIVE. 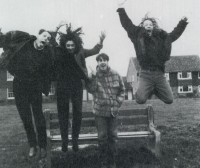 Slamming into a funky dance riff to a beery full house of punters at the Turk's Head, Reading and leading worship at Spring Harvest's pioneering The Word Alive' week (where the seemingly once impossible meeting of church streams - Spring Harvest and Keswick Convention) seems an immensely unlikely collision of worlds. But for Funky Beehive it's a reality. The West Midlands-based band are at Spring Harvest in Pwllheli in the 16-19 worship offering a sacrifice of praise and then will be shifting roles, visiting other sites to appear in Spring Harvest's 'After Hours' entertainment performing the dance-tinged pop they normally perform for the Heineken-and-good-times circuit of pubs and clubs. In many ways Funky Beehive's entrance into praise and worship ministry at this year's Spring Harvest will be both a time of spiritual refreshment for the band after the gruelling rigours of the secular circuit and the completion of a decade-long circle. About Spring Harvest's potential for spiritual refreshment, the band's 27 year old drummer John Graham speaks for all the band when he says how much Funky Beehive are looking forward to the event. "Spring Harvest will be an oasis for us. Various members of Funky Beehive have played in the past in the large celebrations at Spring Harvest and we know what a special event it is. When we moved away from church-organised events and began playing in the secular arena I don't think we fully knew how much we were going to miss the blessing and the privilege of leading people in worship."

Funky Beehive's role in leading young people in praise and worship will be the completion of a Christian music circle. For the origins of this funky pub rock circuit team is praise and worship. For once Funky Beehive were known under another name, the Saltmine Band. It was in 1980 that evangelists/Bible teachers Doug Barnett and Ian Coffey along with veteran pop gospeller Dave Pope formed the trust as a structure to engage in a wide range of Christian ministry. Dave Pope needed a band to accompany him into the church halls, schools and celebrations and The Saltmine Band were formed. A system of giving musicians hands-on experience of Christian ministry was developed where musos would join Saltmine for a two-year period. The work was gruelling, the financial rewards few but the Saltmine system proved a fine training school both spiritually and musically.

Despite the continually shifting personnel the band developed an excellent musical standard, even recording an album for Word in 1984 with Dave Pope (and guest Chris Eaton). But the Saltmine Band were primarily perceived as a live event fixture at worship celebrations and evangelistic rallies. The band had top line musicians pass through its ranks (Split Level's Rob Craner and session drummer and Remission Choir member Carl McGregar being just two) while by 1989 they were doing more and more engagements without Dave Pope. The 1989 Saltmine Band vocalist Tanya Langdon, keyboard player Rob May, guitarist Guy Houchen, bass player Phil Barker and drummer John Graham decided on a radical change of direction. "We were frustrated with doing supposed evangelistic gigs and finding ourselves performing to audiences of predominantly Christians. We felt we had to get out and show Christ to the people who really needed him in the places where they were. Places where when you played a gig the people would show it if they liked you but if they didn't they wouldn't do the standard response, 'Oh, they're doing their best, bless 'em', but where the audience would walk out. Or bottle you!"

Out went the old name and in came a set of engagements a long way from the church-based events of old. Their press release at the time spelt out the change. "The new name is Funky Beehive. The new band line-up and image along with their original music style will take the band into pubs, clubs, university bars -secular venues where those who would only be seen dead in a church can enjoy the music and catch a glimpse of the Christian message." Although some might question the inherent naffness of the band's new moniker few could question the zeal with which Funky Beehive threw themselves into the challenging new arena of pubs and clubs. "We didn't amend our material," emphasises John. It was far from easy and after building up a healthy engagement book, things took a further set back when Tanya Langdon and Phil Barker flew off from the hive. For a while the band made do with various dep singers and a well known bass-man, who's still with them, called Sequencer. A hot singer was a more difficult problem. Finally the band persuaded Kaz Lewis, who has done session work with Kingsway and ICC, to join Funky Beehive permanently. "Helen Burgess, who used to sing with the band, introduced Kaz," remembered John. "Kaz has a very soulful, jazzy kind of voice and we're very excited at the direction she's bringing to the band. After Spring Harvest we're going back on the road (at one time Funky Beehive were averaging a staggering 20 gigs per month) and then we hope to record our first album in the summer."

Kaz has in fact already made a recording with a decidedly quirky satellite of Funky Beehive's activity. Keyboard maestro Rob May has taken time out from Funky Beehive to co-produce a decidedly radical Christian rave album. Under the name OS1, the album 'Eternal' (to be released to coincide with Spring Harvest) features hard core rave plus sundry dance floor delights including a couple of operatic vocals and Kaz Lewis singing a house version of the ancient hymn "Praise My Soul"! For Funky Beehive the gigs are beckoning though as John commented: "The idea of the band isn't to be like a mega-star band. It is to do simply what we are doing now."

John wasn't critical about Christians who had followed the path of potential fame and fortune. "I think it's good that there are Christian artists in the public eye. I wouldn't say I'm a particular fan of Martyn Joseph, but he obviously appeals to a certain bracket. Whether he, and others, have got what it takes to make it I don't know. But it's great that Christians are being heard on mainstream radio and everything else.

"But with the current position, I think that you can give people an alternative, something that's clean and healthy to listen to. Even if it isn't shouting 'Jesus' down peoples throats then that's good. And I think it does a lot of good, I think that's what they are trying to do. The belief is that we are in God's will. If tomorrow God said to me that I should leave the band then I would. But I believe it's something God has given us to do and we are doing our best to fulfil it. That's partly why we are gigging at half strength. It is because we believe we can cut it, and we feel the message we have to give is an important one. We are still getting asked back to places so we can't be that embarrassing!"

Wonder what the guys are up to nowadays? Any ideas?