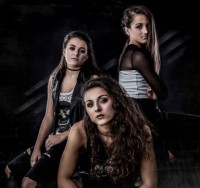 GFM, otherwise known as Gold Frankincense & Myrrh, are a band who utterly defy neat pigeonholing. For a start, they play ferociously loud hardcore music which you wouldn't expect to hear from three teenage girls. Coupled to that, the trio's last EP, 'Oh, The Horror!', is inspired by Halloween celebrations, hardly a topic dealt with by many Christian artists, while GFM's latest single is a cover of an old Andy Williams Christmas song. To get to grips with this hard and heavy trio from Jacksonville, Florida, xRhythms' contributor Shez spoke to 20 year old CJ (vocals, guitar), 19 year old Maggie (vocals, bass, keys) and GFM's ferocious drummer Lulu (amazingly, still only 15 years old). Here is an edited transcript of that xRhythms chat.

Shez: Tell us about the music you produce.

Lulu: "Metalcore music, but since we're all girls we came up with our own genre, called beautycore. Any band that's heavy but all women. Our whole thing is we are a positive message band, so our music is going to be positive. We are all Christians so we share our faith from the stage and talk one-on-one on the merch table. We want to be that light in the darkness and encourage anyone of any age, any gender, that there is hope and there is a day to live for, to look towards. We want to bring more of a funness back to the metal genre. It's been like everything was taken so seriously. We wear cheerleading outfits on stage."

CJ: "Most of 'beautycore' was a joke. We're in the metal industry - male dominated - and we're wearing cheerleader outfits. I have sparkles, and I love that. But Maggie screams lower than some of the guys we know, so where do we fit? We're just tired of trying to fit in, so we make up our own genre: beautycore. You can see on our online forum, people are meeting up. 'I'm from this area!' 'I'm from this area! Let's drive there and meet up together.' We're originally from Florida, and we play a lot there. We're actually meeting with a couple of our friends that have come to a lot of the VIPs we have in Florida. One's from Tampa. Where's the other from? It's multiple hours apart and they're like best friends now from coming to our shows. We're creating that community, and it's crazy. But we're super-grateful for it because we couldn't do it without you guys."

Shez: How did you go from being three ordinary girls - sisters - to being a band and touring before any of you are 20 years old?

Lulu: "It helped that our mom and dad didn't think of us as ordinary. They knew God had a plan for us. They knew there was something in us. They said from the beginning, 'We have a feeling this is going to get big, and you're going to be used by God - which is kind of where it started.'"

Maggie: "Back when we were five years old they put us in music lessons and they said, 'If you hate it, you can quit, but you've got to do it for two years and stick through it.' We ended up falling in love with music. Our dad wanted us to do a cover band so we could play his favourite songs, just for his enjoyment. We went, 'OK, dad! Cool!' Then we started writing our own music, and things escalated from there. We've been really blessed to have our parents' support, not only financially but emotionally and physically. Our mom is our manager and bus driver! On tour it's a whole family affair. We can't get homesick, because home just comes with us."

CJ: "We definitely realised, two or three years ago - that's officially when GFM are taking a stand and touring hard, and actually know what we're doing - we had a burden for people. People are hurting, and you don't see it until they allow you to see it, which is really scary. You know that person is at breaking point when they reach out first, because no one reaches out anymore. People are just giving themselves to us, and it's really cool that we have the opportunity to give them truth. We're not just like, 'John 3.16! We love Jesus.' We're like, 'We know what we believe, and we want to show it to you. We love playing music, we love joking around on stage and being crazy, but we love people. We genuinely love you!'"

Lulu: "Christianity is not for you, it's for others. We are put on this earth to show love - if that's sharing the Gospel or just helping someone out. Christianity is a faith for others. It's not a selfish faith. We just want to be that person for them, whether they need us to love on them or they need someone to talk to, or they do need the Gospel."

Shez: What made you a metal band and not a country or a pop band?

CJ: "When we first started taking music lessons, we were super-hardcore fans of Skillet and We As Human. That was our inspiration. 'We gotta be that! That's gonna be us!' Then our guitar teacher introduced us to different bands that were harder, and we were like, 'Oh my word, we love this!' So we wanted to bring that punk-thrash heavy metal low screams into our music. But there's a positive message too."

Maggie: "We were just doing our own thing, and doing stuff people haven't seen before. We just tried to find that in every aspect of our lives, so it melted over into the music aspect as well."

Shez: You're tackling a lot of the subjects other metal bands are - mental illness, isolation - but you're coming from the perspective of your faith.

Maggie: "It's a dark world. It's taken a toll on all of us, but because we have God and we have our salvation, we have the hope and the strength to keep going. It's super-important that we have each other. We're all constantly in the Word every day. If you're not, that's when you fall, when you're not putting on the full armour of God. It's super-important we all do that so we all have each other. If one of us falls, two of us are there to pick the other back up."