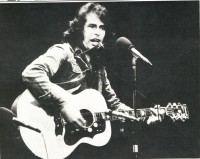 Surprisingly, a throwaway comment about an old US president provides the inspiration for the title to Garth Hewitt's first and rather unexpected package of 11 'alternative worship' songs. As Garth explained to me when I met up with him half way through his UK tour: "George Hamilton IV was talking to me one day about ex-president Jimmy Carter and he was telling me how he (Jimmy) was up a ladder with a hammer and nails building homes for the homeless, and then he added, "He really walks his talk!'. And I thought, 'What a lovely phrase that is,' so I sort of tucked it away in my mind and when I was thinking about a song that was about living out the Christian faith in action in a practical way, that was the phrase that same to mind."

Produced by Ben Okafor and Gladstone Wilson, the concept of "Walk The Talk' is not that of your average worship album combining as it does the vocal talents of seven well known black church singers into a distinctly African groove to express very well both the pain and joy of Garth's heart for a more vivid, life reflecting worship. As he was keen to explain: "I was concerned that often there are certain aspects of biblical faith that get left out in our worship songs. We're very good on personal faith songs, we're good on what I might call triumphalist songs, but I was particularly concerned to take up some of the issues I'd spotted as I'd travelled around the world - issues of hunger and poverty, justice and so on. It seems to me that in the Bible as you look at the prophets or you look at the Sermon on the Mount, if you look at Jesus, you see a spirituality that takes into account the needs of the world around. In fact the prophets are constantly saying that God hates the worship and it's not because it's lightweight worship, in the context of Isaiah they are people who are fasting, they're taking it very seriously, but he hates the worshippers because they're not committed to the poor and those who are oppressed or suffering.

"It seems to me our worship songs need to have the honesty of the Psalms - the pain, the lament. I've also included on the album songs of hope, songs of resurrection, rising from the crucifixion of struggle, because in terms of people that I have met, often in places of conflict or poverty, they are people sometimes of joy. Not some superficial happiness but joy borne out of their struggle. So I felt I should write some songs with an emphasis on that kind of spirituality I particularly experienced in the third world."

On the cover of the album there is an illustration that sums up perfectly what Garth is saying. It is an Ethiopian picture of Jesus washing the disciples' feet. Garth pointed out: "This symbolises the servant nature of Jesus and what he calls us to follow. This is the only time that Jesus described himself as Lord."

Challenging stuff! Obviously worship is no casual Sunday morning slot but, what did Garth think was a real key in worship? "I think," he replied, "it's not to look at worship in a selfish way. In the West we tend to be materialistic about it. You know, 'What can I get out of this?', "How can I feel better?'. If you're keeping up your own personal prayer life and so on, you don't go to church in such a greedy fashion, so you're more prepared to give and to receive and to be open to God perhaps coming from directions you didn't expect. Consequently we go to learn, to be open to God communicating with us and how he wants us then to live that worship out in life. That's a good question to be asking yourself because if at the end you simply felt excited what good has it done? How is it going to affect you when you walk out? And that's a key to good worshippers the prophets tell us. You've got to make that worship be lived out in life."

Garth has obviously been spiritually shaped by the Third World Church so I asked him why he felt their worship is more vibrant. Is it due to their increased suffering or pain? "I think sometimes there are less distractions in contexts like that. I mean, we have an awful lot of distractions so you become almost a materialist in your worship. In other words you can pick and choose! Whereas there, yes, you've got to make it happen. But I recognise that under suffering some people simply go down and others are strengthened and refreshed. We have to realise that in the West, according to statistics, the Church is dying. At the seem rate, in 20 years it would look a very bleak scenario. But that's not the case in Africa and South America and Asia. There it's going the opposite way. So we need to learn from them. I think their spirituality is something that is rooted in life and rooted in God. There's a lot to learn from that."

One person who might possibly agree with Garth, if he was around, would be the respected apologist A W Tozer. He once wrote: "If the true worshipper is one who worships God in spirit and in truth, how can laws or jails or abuses or deprivations prevent the spiritual man from worshipping?... The essence of spiritual worship is to love supremely, to trust confidently, to pray without ceasing and to seek to be Christlike and holy and to do all the good we can for Christ's sake." Mmm!